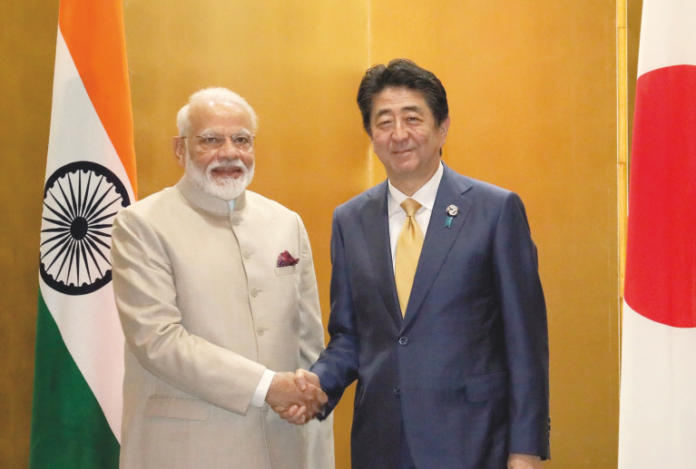 India’s Prime Minister Narendra Modi participated in discussions on crypto assets at the G20 leaders’ summit in Osaka, Japan. At the conclusion of the summit, the leaders of the G20 countries jointly declared their commitment to applying the crypto standards set by the Financial Action Task Force. India’s new finance minister, Nirmala Sitharaman, also joined other G20 finance ministers to declare the same commitment.

India’s sherpa to the G20, Suresh Prabhu, detailed this week various discussions Modi participated in at the two-day G20 leaders’ summit which took place on June 28 and 29 in Osaka, Japan. India will be the host country for the G20 summit in 2022.

“As you know India was looking forward to G20 for many perspectives,” Prabhu began. “Prime Minister Narendra Modi who led India’s delegation raised many issues of global concern as well as highlighted the role of India’s new innovation into making change in a manner that benefits all.”

On the subject of crypto assets, Prabhu confirmed that they were discussed at the summit in his statement regarding global finance. “In economy, finance will be an important issue. Therefore issues related to global finance … whether it is related to technological innovation which can deliver benefits in financial markets or whether it is related to the commitment in applying recently amended FATF [Financial Action Task Force] standards for virtual assets, all these issues were also discussed,” he said.

At the conclusion of the summit, the leaders of the G20 nations, including India, jointly issued a declaration which includes statements on crypto assets. “We reaffirm our commitment to applying the recently amended FATF standards to virtual assets and related providers for anti-money laundering and countering the financing of terrorism,” they declared.

The FATF is an intergovernmental organization responsible for developing global policies in areas such as combating money laundering. It currently comprises 37 member jurisdictions, including India, and 2 regional organizations.

Ahead of the leaders’ summit, the G20 finance ministers and central bank governors met in the Japanese city of Fukuoka on June 8 and 9 where crypto-related topics were discussed, including FATF’s guidance on crypto assets. At the end of the event, they declared their commitment to applying the FATF standards to crypto assets.

India’s Finance Minister Nirmala Sitharaman and Finance Secretary Subhash Chandra Garg attended the meeting. Garg, who is also India’s Secretary of Economic Affairs, heads an interministerial committee tasked with drafting a crypto regulatory framework for India. He said last month that the report containing the recommended framework was ready to be submitted to the finance minister for approval.

Moreover, India’s Department of Revenue had been working with the FATF on the global standards for crypto assets, the country’s finance ministry revealed in its March report of all key activities in 2018. The FATF issued its new guidance for the risk-based approach for virtual assets and virtual asset service providers (VASPs) on June 21, a week before the G20 leaders’ summit commenced.

Varun Sethi, founder of Blockchain Lawyer, told news.Bitcoin.com that, since India is a member of the FATF, “ideally, it may derive the proposed provisions from the recommendations of FATF. Hence FATF is a relevant organization for India to develop legal literature for crypto guidelines.”

Implementing the FATF standards would mean that crypto gets a legal status in India. The biggest advantage is to the end customers as the crypto industry can once again offer banking services to the fiat on ramps. Currently, there is a banking ban in India on crypto service providers including exchanges. The country’s central bank, the Reserve Bank of India (RBI), issued a circular in April last year prohibiting regulated entities from dealing in cryptocurrencies or providing “services for facilitating any person or entity in dealing with or settling” in cryptocurrencies. The ban went into effect in July last year. A number of writ petitions have been filed with the supreme court to lift the ban, but the court repeatedly postponed hearing the case. The next hearing is scheduled for July 23.

Since the ban took effect, at least four crypto exchanges have shut down due to the banking restriction. Zebpay, formerly one of the country’s largest crypto exchanges, closed down all of its local exchange operations in September last year. Coindelta announced its shutdown in March and Coinome in May. Koinex followed suit last week, blaming the banking ban and the government’s delay in introducing crypto regulation.

Sumit Gupta, CEO of local exchange Coindcx, emphasized to news.Bitcoin.com that “The FAFT recommendations are not binding on members,” noting that it will be up to each member country “to determine whether to enact the recommendations through legislation or regulation.” However, he asserted:

For India, it looks to be a no brainer and will look for definite implementation as its stance for cryptocurrency has been negative as it believes cryptos to be a big hideout for black money and money laundering. A number of industry participants have raised concerns regarding the technical challenges of complying with FATF’s requirements. Blockchain forensics firm Chainalysis summarized that the FATF guidelines “require VASPs not only to verify their customers’ identities, but also to identify the recipients of their customers’ transfers, and transfer that information. This would be applicable to all transactions above a 1,000 USD/EUR threshold.”

Gupta highlighted some issues regarding the implementation of the FATF standards such as “How will one identify whether a counterparty is an individual or service provider” and “How to identify a person with two identities at two different service providers e.g. most Chinese have separate English names.” He remarked:

Former FATF President Roger Wilkins AO commented, “What we are hearing from industry is that the new rules may have the opposite effect to which they were intended, effectively forcing crypto transactions off the controlled platforms.” He delivered a keynote speech at the V20 summit, a conference where policymakers and representatives of a number of crypto companies convened to discuss how VASPs could follow the FATF guidelines.

At the end of the two-day V20 summit, several crypto associations signed a Memorandum of Understanding (MOU) to establish an association to “assist in establishing a means to engage with government agencies and the FATF to ensure our best interests are understood and valued at an international level,” the V20 announced.

Shetty continued to explain to news.Bitcoin.com that applying FATF’s recommendations “is definitely not straightforward but it’s a good step in the right direction for countries worried about money laundering.” He noted that “to be able to implement them, countries will need to cooperate with each other so that crypto industries in every country can work together to implement this,” elaborating:

The FATF standards cannot be adopted in silos in each country as there are recommendations that require the collaboration of exchanges and crypto wallets across countries.

“You cannot expect an exchange in one country to adopt FATF standards while exchanges in other countries don’t, that just won’t work,” he reiterated. While noting that his exchange “already performs stringent KYC,” Shetty admitted, “We’ll definitely have to put in more resources in becoming compliant.” He believes that doing so will “also ensure optimum safety for our users as well as peace of mind against money laundering for our country.”

Gupta pointed out that, if the FATF standards are implemented, “the exchanges will start implementing KYC guidelines thus making it difficult to deal in cryptos with privacy and anonymity.” He added that “They will also stop providing products and coins that support anonymous transactions. For a lot of exchanges, this would be compromising on the notion of decentralization.” India has been plagued with rumors of a draft bill to ban cryptocurrencies over the past few months. Bloombegquint reported that a bill entitled “Banning of Cryptocurrency and Regulation of Official Digital Currency Bill 2019” proposes a 10-year jail term for a number of crypto-related activities.

Tanvi Ratna, a policy analyst and EY Blockchain Lead who has worked with the Indian government on several projects, shared some thoughts with news.Bitcoin.com. “I doubt that India would face any problems complying with FATF standards,” she began. “By all indications, all crypto transactions are going to be shut down. The only transactions likely to continue would be with a sovereign digital currency, which should be fairly easy to do AML/KYC in.”

Ratna continued: “There is nothing really to gain or lose for India by complying with the standards, perhaps only a degree of cohesion with other central banks. Nobody yet has cracked a way to do complete KYC/AML of transactions, so with a sovereign coin, India might even be the first. The obstacles for other countries and the larger cryptocurrency space will remain, India is not going to provide any solutions to that.” The Indian government has not made any announcement regarding crypto regulation so reports of the aforementioned bill remain just rumors. A number of Right to Information (RTI) requests have been filed regarding this bill, one of which reveals that the central bank had no knowledge of this bill and did not propose a ban on crypto assets.

Shetty believes that implementing the FATF standards will “wipe out all the uncertainty and fear that the crypto community in India undergoes every few weeks when there’s a new rumor of a crypto ban,” asserting:

“If India adopts these rules rather than banning cryptocurrency, the industry would be free of malicious characters and will allow innovation and progression,” Gupta opined. The alternative “will also prevent people from using cryptocurrencies for their positive characteristics rather than as hideout for tax evasions,” he described.

In Prabhu’s statement to the press after the G20 leaders’ summit, he claimed that Modi “believes in changing the world for [the] better through a process wherein technology, traditional knowledge, good governance and making sure that everything is integrated into a unified policy.”

Prabhu also said that India and Japan will “discuss many more things in continuation.” Japan has been at the forefront of crypto regulation, having legalized cryptocurrencies as a means of payment back in April 2017 and already approved 19 crypto exchanges to operate in the country. In addition, over 140 more companies have expressed interest in registering crypto exchanges in Japan, the country’s top financial regulator previously told news.Bitcoin.com.

Images courtesy of Shutterstock, the Japanese government, and the Indian government.

The post Modi Discussed Crypto Standards at G20 Summit – A Look at How They Apply to India appeared first on Bitcoin News.

The long-awaited Bitcoin price correction lasted less than an hour. Yes, it did dump 30% as many analysts had predicted,...