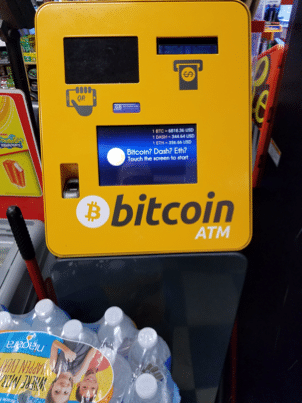 In my previous research for Coinbase alternatives, I discovered a fairly novel way to purchase Bitcoin and other altcoins – Bitcoin ATMs. Like normal ATMs, you deposit cash into the machine, but instead of receiving your funds in a bank account, you receive an equivalent amount of Bitcoin in a wallet that you provide.

There are currently over 1700 Bitcoin ATMs across 58 countries. These machines aren’t the only way to purchase cryptocurrency with cash, though. Beyond the thousands of ATMs, there are almost 40,000 service providers that can help you exchange Bitcoin for cash and vice versa.

Bitcoin ATMs have been popping up recently in online articles promoting the ever-growing adoption of Bitcoin, but I (wrongly) assumed that they were limited to large cities. For fun, I entered my address on Coin ATM Radar to see how far I’d have to travel to try out one of these bad boys.

I was shocked to find that, lo and behold, there’s a Bitcoin ATM just blocks from my apartment in the back of a Chevron gas station. Who would’ve thought that a city of just 140,000 would be on the forefront of cryptocurrency advancements?

The ATM was a little tough to find hidden behind a stack of water bottle cases and a couple of mini-kegs. After shifting some inventory,  I had plenty of room to work and can begin my crypto purchase.

I’m greeted with a simple screen showing the exchange rates for each of the three currencies offered – Bitcoin, Dash, and Ethereum.

I can see at first glance that this isn’t going to be a cheap experiment. Bitcoin is listed at almost $1000 more than the market rate for a price of $6818.36 USD. For those who don’t want to do the math, that’s about a 17% markup – a not so small cost for convenience.

After choosing to “buy Bitcoin”, I’m told that I need to be registered to use the ATM. It seems strange that I’d need to register to purchase a currency that became popular, in part, due to its privacy aspects, but I decide to continue anyway. I’ve got nothing to hide. I’m first prompted to enter my phone number to receive a one-time password. Easy enough. I get the text with my password almost immediately.

Once I enter my password, I’m then required to scan both sides of my driver’s license. This seems a bit invasive, but once again, I push forward. 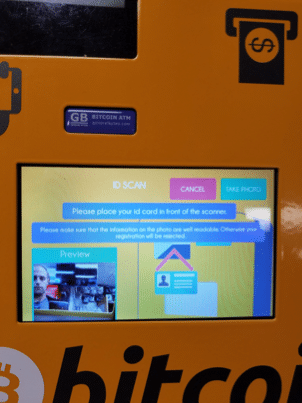 For the last step of the registration, I need to take a selfie. This is usually where I’d draw the line on privacy; however, I’m curious to see how the rest of the process plays out, so I snap a picture. The sacrifices I make to produce an interesting article. My first selfie attempt is rejected because I’m not smiling. This is a strange requirement, but okay. I try again, showing off my pearly whites this time, and that does the trick. Finally, time to buy some Bitcoin.

The next screen informs me that my registration has been submitted but not approved yet. This process could take up to 5 minutes – an estimate that I’m sure is on the optimistic side. I could either stand in the gas station awkwardly waiting for my approval, or I could call it a day and visit again tomorrow. I choose the latter.

I show up the next day and head straight for the ATM – an action that the gas station attendant was clearly not accustomed to seeing. Through some casual chit-chat, I learned that they had gotten the ATM a couple of months ago, but it hadn’t been getting very much action. I refrained from telling him that the 5-foot high beverage pile in front of the machine probably wasn’t helping. Other than that, he didn’t know too much about the ATM or cryptocurrency in general.

Back at the machine, I once again have to enter my phone number to get my password.

Success! Now, I’m finally able to enter the recipient wallet address for my Bitcoin. I log into my wallet account on my phone and pull up the QR code. While doing this, I time-out of the ATM and have to enter my phone number again. Thank God I’m not in a hurry. Entering my wallet information is much easier than I anticipated it would be. The scanner on the ATM has no problems reading the image from my phone as I hold it up to the camera. After my issues taking a selfie the previous day, I thought this would be an issue.

On the next screen, I’m able to confirm my address and begin inserting some cash. I slip in a crisp $10 bill (baller!) and approve my transaction. I then receive a confirmation message and head home knowing that these exchanges usually take a few minutes. Once at home, I check my Bitcoin wallet, and sure enough, the funds are there!

Purchasing Bitcoin through an ATM was by no means a pleasant task. The registration process is unnecessarily intrusive, and the poor exchange rates outweigh the positives of any convenience that you may gain by using the machine. I doubt I’ll be using one again in the immediate future.

That being said, I think these ATMs are ideal for people without access to a bank account or those attempting to cut ties with the current financial system. As Bitcoin becomes a more prevalent payment method around the world, I could also see ATMs like this being popular among travelers looking to avoid the poor rates found at the currency exchanges of each country.

The growing popularity of Bitcoin ATMs is a good reflection of the steps the world is taking toward the adoption of crypto. As the technology improves and the exchange rates become more manageable, I’ve got no doubt that machines like these will be widely used in cities, both big and small, around the world.

The post My Experience Using a Bitcoin ATM appeared first on CoinCentral.

Bitcoin whales are attempting to shake out emotional traders today, as the price finds itself back on the main support...