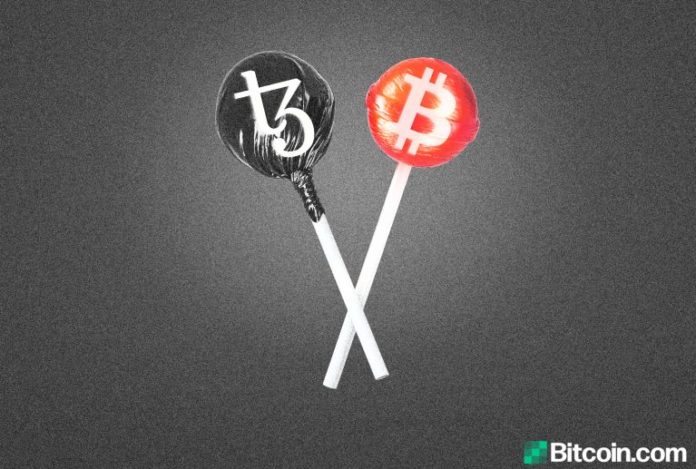 On April 8, the Bitcoin Association Switzerland (BAS) announced the launch of a new wrapped bitcoin project called Tzbtc. The token will be used on the Tezos network and each token will be backed 1:1 with BTC. The project is now the fourth tokenized project that leverages BTC on another blockchain.

There’s now a number of tokenized BTC projects that leverage tokens on an alternative network and claim to be backed by bitcoin held in reserves. For example, in January 2019, news.Bitcoin.com reported on the official launch of the Wrapped Bitcoin (WBTC) project led by the custodian Bitgo. WBTC uses the Ethereum blockchain and each token is claimed to be backed 1:1 with BTC that’s held by Bitgo. The WBTC project has become popular since the initial launch and there’s $7.6 million worth of BTC locked up in the system. The system has more funds locked in than the Lightning Network’s $6.9 million total value locked (TVL) and WBTC has been around for far less time.

The following summer, the team behind the crypto-swapping application Sideshift.ai launched a Simple Ledger Protocol (SLP) based token called BTC2 that’s backed 1:1 with BTC as well. This year on February 13, software developer Matt Luongo announced the first release of a project called Tbtc on Ethereum’s Ropsten testnet. Unlike the BTC2 and WBTC tokens, Tbtc aims to be a noncustodial decentralized finance (defi) platform. Luongo stressed that the testnet version was the first of a “few planned releases leading up to mainnet” and the team is still auditing the Tbtc project.

On Wednesday, the Bitcoin Association Switzerland (BAS) revealed a new type of wrapped BTC project that will be hosted on the Tezos chain. BAS also noted that the coin (TZBTC) will use the FA1.2 Tezos token standard and there’s a possibility it could be connected with the new Stakerdao platform.

“The multi-signature key management system of Tzbtc enables a strongly trust-reduced setup with no central issuer as a single point of failure, while being fully transparent,” explained the announcement written by BAS. “The Bitcoin Association Switzerland acts as an overseer and coordinates with the keyholders. Protected by Swiss law and cryptography, we’ve found a practical balance between decentralization and usability,” the organization added. The association continued:

TZBTC gives people more choice of how they can use bitcoin, and by that increase the utility and strengthen the position of bitcoin as the world’s leading digital currency. This belief in choice is why we are exploring to bring bitcoin to more open networks.

The BAS detailed that the Tzbtc project statistics can be viewed at the websites bitcoinassociation.ch/tzbtc and tzbtc.io. After the covid-19 pandemic ravaged the crypto economy, tezos (XTZ) lost 14.5% in the last 30 days. But with very minimal project updates and news, XTZ gained 55% in the last 90 days and 109% during the last 12-months. Tezos native currency XTZ can be staked and the cryptocurrency’s staking yield is an annualized yield of 6.9% according to current stats.

Tezos is not without controversy, and Harvard researcher Michael Neuder wrote a paper that claims the project is extremely vulnerable to “selfish mining” attacks. The paper called “Selfish Behavior in the Tezos Proof-of-Stake Protocol” notes that an alleged variant of selfish mining can lead to staking centralization and vulnerabilities. However, Neuder stressed the paper was not an overall security analysis of the entire Tezos network.

“By no means have we provided a complete security analysis of the Tezos protocol,” the author underlines. “Future work combining selfish endorsing with other deviating strategies, as was done in the [proof-of-work] PoW literature, is critical to assessing the total security of the system.”

With the new Tzbtc project, the creators think that it will bring BTC liquidity into the Tezos ecosystem just like WBTC did with Ethereum. “The governance mechanism of the Tzbtc contract allows for the compliant and secure issuance of BTC-backed tokens on the Tezos blockchain,” the Tzbtc briefing explains.

What do you think about a wrapped bitcoin project on the Tezos chain? Let us know in the comments below.

The coronavirus epidemic has garnered a lot of attention and comments from various celebrities and personalities that have expressed their...