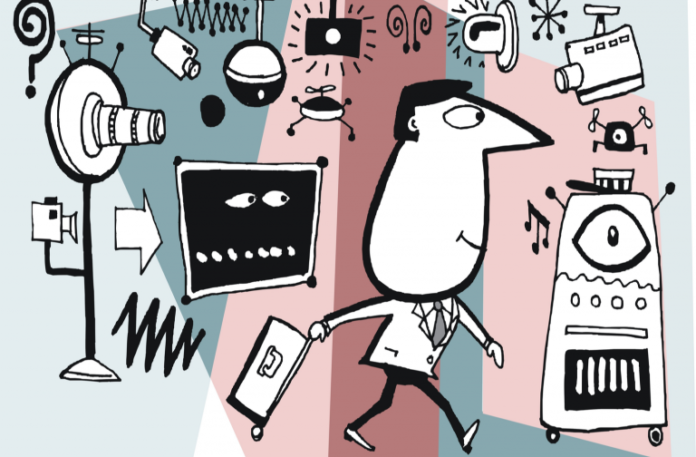 It may sound like something from a dystopian cyberpunk movie, but payment providers could soon be validating transactions by the way users walk, their heartbeat, veins, and more. Mastercard has recently revealed they “have been testing heartbeat, vein technology, and the way people walk to authenticate people.” The high tech proposal, designed to fight hackers and increase convenience, could be a serious issue for people viewing such measures as unnecessary and invasive, where Bitcoin solves many of the challenges facing online finance already.

Mastercard to Map Your Walk

Mega payments provider Mastercard recently revealed to financial news outlet Marketwatch that “We are working with transport organizations where your face or gait will authenticate you.”

While facial recognition software is becoming more and more widely utilized in security, and the field of biometrics continues to evolve rapidly, most everyday people still haven’t considered that something like their gait, or style of walking, could be a means of identification. The tech will ostensibly be able to utilize CCTV, amongst other means, for allowing services such as boarding of public transport. The president of cyber and intelligence solutions for Mastercard, Ajay Bhalla, told the news outlet:

The way you hold your phone, which ear you use, and how your fingers touch the buttons are all unique to you. We have been testing heartbeat, vein technology, and the way people walk to authenticate people.

For those that think they’ll be able to outsmart this type of tech if it falls into the wrong hands or is abused, they may want to think again. As coronavirus fear grips China and residents are required to wear masks for protection, Chinese AI startup Sensetime has already announced the rollout of new tech which can read 240 facial key points, allowing identification of individuals even if they’ve donned a mask.

The Mastercard exec also told Marketwatch that “The world is changing at a fast pace. Hackers are figuring out how to attack individuals to get their credentials.”

This narrative of payments becoming increasingly electronic and the need for greater online security is not new. In fact, the United States Federal Reserve announced last summer they are developing a new, fast and secure payments system called Fednow. Federal Reserve Board Governor Lael Brainard stated at the time, “Everyone deserves the same ability to make and receive payments immediately and securely, and every bank deserves the same opportunity to offer that service to its community.”

“The way you hold your phone, which ear you use, and how your fingers touch the buttons are all unique to you.We have been testing heartbeat, vein technology,and the way people walk to authenticate people”#PrivacyFirst https://t.co/ZrZzF7vIHh

The thing is, we’ve already got that. It’s called bitcoin. Not able to be hacked if stored non-custodially, and not subject to centralized censorship at a protocol level, Satoshi’s creation is one of the most secure payment networks there is. Further, transactions can be obfuscated for greater privacy.

The real issue at hand becomes apparent when a critical common thread between narratives from China, the Fed, and companies like Mastercard emerges: the promotion and cultural whitewashing of unmitigated, highly invasive surveillance. Often, when solutions like bitcoin are presented as viable options to the authoritarian class, the response is the same: users of bitcoin are criminals, because who else would want to use money that isn’t centrally controlled? U.S. Treasury Secretary Steven Mnuchin has even gone as far as making the absurd claim that U.S. dollars are not used for criminal activity, stating:

I don’t think it’s been successfully done with cash. I’ll push back on that. We’re going to make sure that bitcoin doesn’t become the equivalent of Swiss-numbered bank accounts.

Anti-money laundering narratives have become the central focus for global financial regulators, and are putting more and more users of crypto out of business and out of wealth. All this when the latest report from state-connected blockchain forensics group Chainalysis shows that less than 1% of crypto usage centers on darknet market activity.

Contrasted with governments’ nasty track records of money laundering, drugs and human trafficking, debasement of currencies, and outright murder euphemized as ‘collateral damage’ in warfare — all financed mainly by the fiat shitcoin known as USD — bitcoin appears to be about as threatening as a toy poodle. It’s important to remember, though, that it does have teeth.

Regarding crypto’s threat to centralized systems like Fednow, former congressman from Texas, Ron Paul, remarked in August: “This will be bad for consumers and real-time entrepreneurs but good for power-hungry Federal Reserve bureaucrats who will no doubt use Fednow to help ‘protect’ the Federal Reserve’s fiat currency system from competition from crypto currencies.” Why Bitcoin Matters to Fight Surveillance

Biometrics provides some great opportunities for security and convenience, affording free market actors cutting edge solutions for their businesses and everyday lives. When it comes down to brass tacks, however, less invasive payment solutions such as bitcoin are not favored by lawmakers, as they’ve stated explicitly that the decentralized and immutable nature of crypto threatens the very stability of the global economy itself.

According to a research opportunity posting from the U.S. Office of the Director of National Intelligence: “Many cryptocurrency enthusiasts predict that either a global cryptocurrency or a national digital currency could undermine the U.S. dollar … The U.S. should prepare for scenarios that threaten to undermine the U.S. dollar as the world reserve currency and determine how those scenarios could be overcome, protecting our status in the global economy.” The real question about all the surveillance coming down the pike is an easy one. Namely, whether these measures will be voluntarily assented to, or whether they will be forced on people. For example, will someone still be able to open a bank account or board a train if they don’t want their vascular tissue analyzed? It’s an uncomfortable reality most don’t want to look at, but ultimately, when it comes to ensuring compliance the state has but one tool, and it ain’t reasoned verbal persuasion.

Bitcoin is very different from any Fednow service, digital Yuan, or Mastercard payment system because the user — and not some third party — controls it. That’s what really seems to get the goat of lawmakers. How far people will go to fight for this financial privacy bitcoin affords them remains to be seen, but let’s hope the shift is more of a philosophical one than is brutal.

What are your thoughts on Mastercard’s proposed verification systems? Let us know in the comments section below.

The post Next Step Mobile Surveillance: How You Walk, Your Heartbeat – Why Bitcoin Matters to Combat Government Privacy Invasion appeared first on Bitcoin News.

Ethereum Still Coupled to Big Brother, Is ETH About to Crash Harder?

It was largely predicted that when bitcoin corrects, the altcoins will capitulate. That appears to be happening this week and...