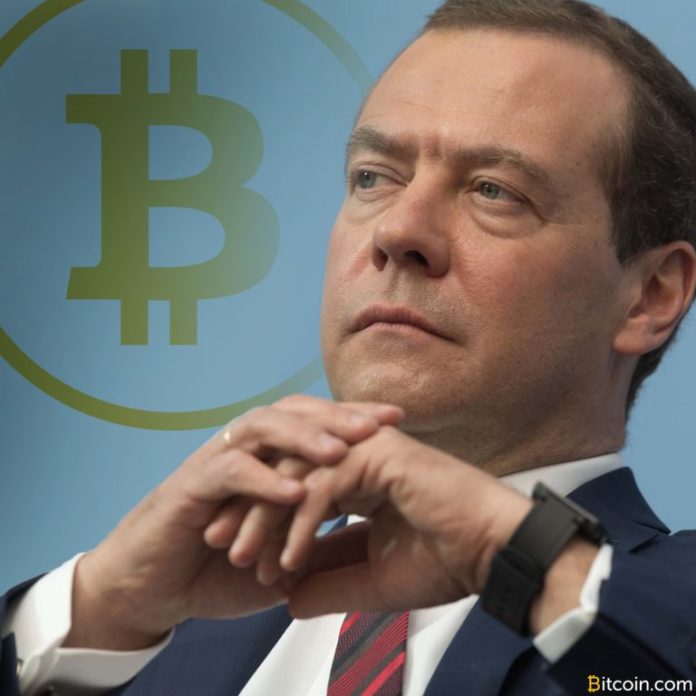 Medvedev thinks the Russian Federation should watch the situation with cryptocurrencies, whose rates “showed extreme volatility” in an extremely bearish 2018. The value of some digital assets fell five-fold, the head of the Russian government noted during his appearance at the annual Gaidar economic forum. Quoted by Tass, he further elaborated:

This, of course, is not a reason to bury them. As with any social phenomenon, any economic institute, there are both bright sides and dark sides.

That’s why the Chairman of the Russian Council of Ministers says Russia should simply carefully follow what’s happening with cryptocurrencies.

Digital financial assets, a term applied to cryptocurrencies in official Russian documents, remain unregulated in the country. However, Medvedev’s comments come just weeks before the lower house of the Russian parliament, the State Duma, is expected to review on second reading a package of draft laws aimed at establishing order in the crypto industry.

Three bills were voted on first reading in the Duma in last May – “On Digital Financial Assets,” “On Attracting Investments Using Investment Platforms,” and “On Digital Rights.” Their final adoption was postponed multiple times but is now among the priorities for the spring session of the house. The drafts are part of a long list of bills designed to regulate different aspects of the digital economy.

‘Why Regulate What We Don’t Understand’

The Gaidar forum is an international event which is held at the Russian Presidential Academy of National Economy and Public Administration (Ranepa). Each year, it brings together economists, scientists, officials, political figures, and businessmen from around the world to discuss current trends in the socio-economic and political development of Russia. The country’s business environment and investment climate as well as the prospects for its integration in the global economy are some of the major topics of the conference.

Russia does not need excessive regulation in the digital economy sector, said Sberbank CEO Herman Gref who was among this year’s participants in the forum. During a session devoted to digitalization, he pointed to the EU as bad example, noting that the General Data Protection Regulation (GDPR) directive has stopped progress in the fields of data technologies and artificial intelligence in Europe.

Gref, who was Russia’s minister of economic development and trade between 2000 and 2007, also noted there’s no full understanding in the country about what should be regulated in the digital sphere. Quoted by Russian media, he emphasized:

There is no need to hurry with regulation. It is not necessary to regulate what we still don’t fully see and understand.

Тhe prominent Russian banker warned that overregulation could hurt the development of new technologies in his country. Gref also said he favors the approach adopted by China and the United States where, in his words, no tight regulation has been applied yet.

During his speech, Gref called on the Russian government to refrain from introducing state monopolies in the development of new technologies and digital ecosystems. “Non-competitive models lead to non-competitiveness of any business model,” concluded the chief executive of the largest Russian bank, which is a state-owned company.

What are your expectations about future Russian policy toward cryptocurrencies? Tell us in the comments section below.

Like it or not, you need to pay taxes on your crypto capital gains. However, there are actually a few...