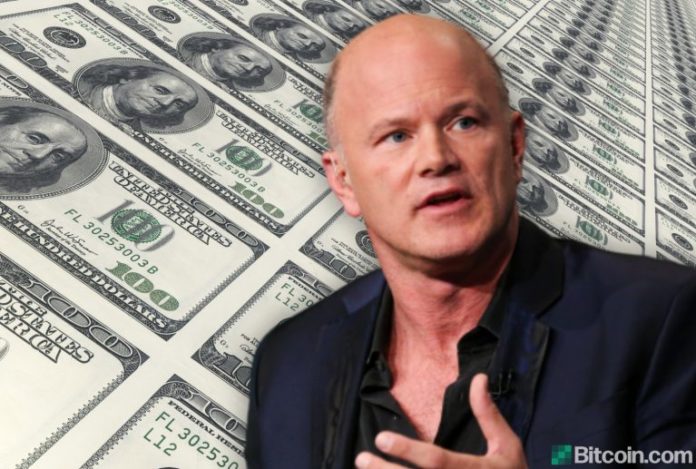 Mike Novogratz, the chairman and CEO of Galaxy Digital, revealed his investment picks in an interview with CNBC on Tuesday, April 7. The former hedge fund manager with investment firm Fortress Investment Group said, “I have a big bitcoin position that I continue to add to it partly because this is an amazing environment for both being long gold and long bitcoin.”

Citing that President Donald Trump is considering another trillion-dollar stimulus package, he said, “money is growing on trees right now.” However, he recalled what he learned as a kid that money really does not grow on trees, adding:

Novogratz is not putting a lot of money in the stock market right now. However, he did buy the Starbucks stock a few days ago because its price has come down significantly and people will go back to drinking coffee when everything returns to normal, the Galaxy Digital CEO explained. Nonetheless, he reiterated that the easiest route for him is gold and bitcoin. Prior to joining Fortress, Novogratz was a partner at Goldman Sachs. He was ranked a billionaire by Forbes in 2007 and 2008.

The Year for Bitcoin

The former hedge fund manager has been favoring bitcoin as an investment option for quite some time, tweeting about the cryptocurrency often. “BTC will continue to be volatile over the next few months but the macro backdrop is why it was created,” he wrote on March 22, emphasizing that “This will be and needs to be BTC’s year.”

On April 2, Novogratz told CNBC in another interview that he had seen hedge fund and high net worth investors he never saw before going into bitcoin for the first time. He opined:

This is the year for bitcoin and if it doesn’t go up a lot by the end of the year, I might just hang my spurs.

Seeing that money grows on trees right now, he asserted, “we are going to debase the value of fiat.” Novogratz believes that the price of bitcoin should double within six months, or by the end of the year. “We really should … this is the time,” he concluded.

Recently, several other well-known investors also recommended bitcoin, including Rich Dad Poor Dad author Robert Kiyosaki and Virgin Galactic chairman Chamath Palihapitiya. The former said that people should take free government money and invest in bitcoin while the latter believes the cryptocurrency could be worth a million dollars.

What do you think about Novogratz’s outlook on bitcoin? Let us know in the comments section below.

More data is flowing in suggesting that May’s block reward halving will initiate notable gains in Bitcoin’s value. This latest...