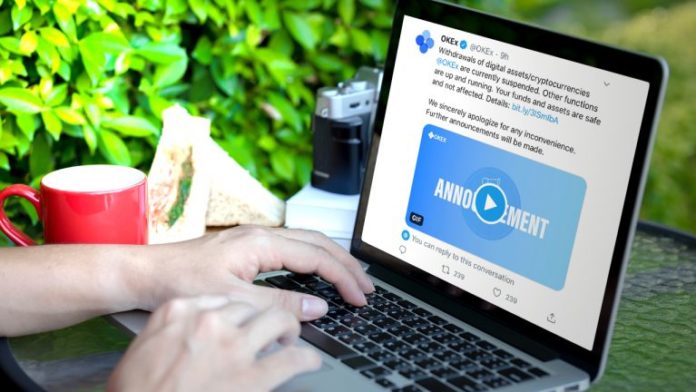 The digital currency exchange Okex disabled cryptocurrency withdrawals on Friday morning and explained that funds were “safe and not affected.” Following the withdrawal announcement, regional reports claim that Okex’s founder Mingxing “Star” Xu was taken away by the police.

On Friday morning (ET) a local report from the publication Caixin detailed that the founder of Okex, Mingxing “Star” Xu, was taken away by the police. Hours before the Caixin published the report, Okex’s official Twitter account announced pausing withdrawals on the exchange.

“Withdrawals of digital assets/cryptocurrencies Okex are currently suspended,” the trading platform wrote. “Other functions are up and running. Your funds and assets are safe and not affected. We sincerely apologize for any inconvenience. Further announcements will be made.”

The withdrawal announcement also provides a blog post link which explains the action in more detail. According to the post, a private key holder from the exchange is currently unavailable and working with law enforcement. The identity of the private key holder is not mentioned in the blog post.

“One of our private key holders is currently cooperating with a public security bureau in investigations where required,” the trading platform stressed. “We have been out of touch with the concerned private key holder. As such, the associated authorization could not be completed.”

The Caixin report isn’t very clear and it explains that two unidentified sources told the media publication about the incident. Cryptocurrency markets took a hit after the withdrawal announcement and the following local reports concerning Xu. Regional reports also show that Star Xu talked with Shanghai police in 2018 as well in regard to an investigation.

What do you think about the issues at Okex? Let us know what you think in the comments below.