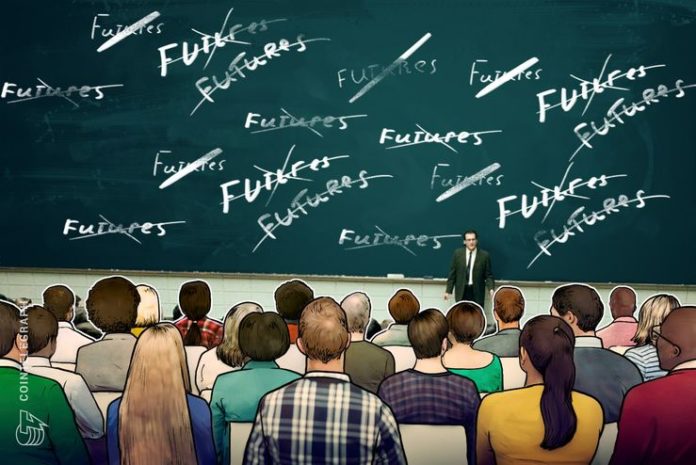 The world of futures trading in Bitcoin for the traditional investor is still very new, as it only opened in December of last year when CBOE and CME launched their products to the market in what was expected to be a big boost for Bitcoin adoption.

However, for those already involved in cryptocurrencies, there have been opportunities to trade Bitcoin futures — along with other cryptocurrency futures — since before the big CME and CBOE launch dates. In fact, OKEx announced its BTC, BCH and ETH futures trading on November 3, 2017.

But, even with this jump on the futures market, and being the second-largest cryptocurrency exchange by volume, OKEx has had its issues with futures trading thus far. First, there was abnormal pricing on March 30 which they had to deal with, bringing with it a threat from a trader that they would attempt suicide if the issue was not resolved.

Then, in May, OKEx had to deal with China National Radio’s (CNR) “Voice of China” program that alleged that OKEx was illegally trading cryptocurrency futures in the country, which has essentially banned all usage of digital currencies within its border.

Now, on August 3, OKEx was faced with a sticky situation in which a ‘Whale’ trader’s wrong-way bet on Bitcoin forced a liquidation of a futures contract, forcing other traders to foot the bill. The latest issue means that those with unrealized gains on their short positions this week are set to lose 18 percent of their profits.

Speaking to Cointelegraph, OKEx head of operations, Andy Cheung, said that this has been a “valuable lesson” for him and OKEx, as they continue to try to improve the trading experience. However, Cheung also admits that there has not been too much fallout from their clawback mechanism, nor damage to the futures trading sentiment.

Cheung put this forced liquidation of a misfired Bitcoin futures trade — with a notional value of $416 million — down to “merely a bad decision of a trader.”

On July 31, an anonymous trader triggered OKEx’s risk management alert system when a long position was placed that contained a massive 4,168,515 contracts. Due to the sheer size of the position, the exchange contacted the trader and asked several times to “partially close the positions to reduce the overall market risks.”

“However, the client refused to cooperate, which [led] to our decision of freezing the client’s account to prevent further positions [from] increasing. Shortly after this preemptive action, unfortunately, the BTC price tumbled, causing the liquidation of the account,” the official statement read.

The ramifications of this liquidation means that counterparties are being left to foot the bill, due to what is known as a “socialized clawback” policy for cases where a trade shortfall occurs.

OKEx have a well-defined policy as to what is done when a forced liquidation occurs, it states:

“OKEX Futures uses a ‘full account clawback’ system to calculate the clawback rate. The system’s margin call losses from all three contracts will [be] merged and clawbacks will be calculated according to each user’s entire account profit, instead of calculating each contract’s margin call loss and clawback separately. Only users that have a net profit across all three contracts for that week will be subject to clawbacks. Clawbacks will only occur if the insurance fund does not have enough funds to cover the system’s total margin call losses.”

In order to try to mitigate some of the losses, OKEx immediately pumped 2,500 BTC (around $18.5 million) into an insurance fund. However, this was not enough to cancel out the damages.

Despite this negative instance for futures trading in Bitcoin, as well as the expenses that the counterparties are left to foot after this anonymous trader’s “bad decision,” Cheung says there was not much lasting damage done.

While a lot of what happened fell a bit outside of OKEx’s control, such as the outlandish trade and the volatile movement of Bitcoin that forced the liquidation, OKEx says it was a valuable lesson for themselves, but is also encouraging futures traders to understand the mechanisms.

“We would say this is a valuable lesson for us in improving our trading experience. We always encourage our customers to study the mechanism behind futures trading before joining the game to avoid unexpected losses.”

The clawback mechanism is one which seems to be a bit of an unknown danger for futures traders who rush into things. However, OKEx has made it abundantly clear that this is the price to pay in certain, unfortunate circumstances.

“The clawback mechanism has been running orderly since [it] launched, and it is widely adopted by major exchanges around the world. Another major exchange that provides margin trading, BitMEX, also adopts a similar auto-deleveraging mechanism, which closes liquidation orders by deleveraging counterparties’ positions by profit and leverage priority.

Still, it is an unfortunate thing for traders to have to deal with because of one bad move by one other trader, and because of that, Cheung adds, they are trying to make these less frequent, and less costly.

“That being said, we are taking efforts to eliminate the risk of large-scale clawback in the future. We have already launched a series of enhancement measures before this incident happened. We will also enhance the education of futures trading for our users, so that they can fully understand the mechanism behind it and will be able to make well-informed decisions.”

Futures trading in Bitcoin, as well as other cryptocurrencies, still has a long road to go before it can be considered totally fail-safe — and even then, there are bound to be mishaps. However, like Cheung says, there are lessons to be learned as the trading option matures in this new and volatile space.

Bitcoin is still a very new asset class, relative to others that are used in futures, and as such, traders are still in the experimental stages. It will take some time to iron out issues that crop up in this new form of trading, but by trying to mitigate the losses, it should be a relatively painless process to get Bitcoin futures operating smoothly.

Opera is launching its desktop web browser with built-in crypto wallet functionality, according to a press release shared with Cointelegraph...