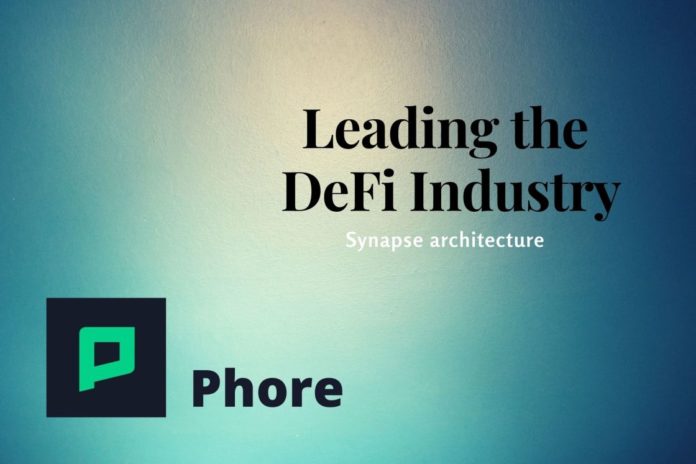 Phore conducts its operations on the Synapse architecture. Synapse is going to streamline the concept of conducting multiple transactions on different blockchains with sharding, simultaneously. Such transactional scalability and accessibility are unlikely to be seen with other cryptocurrency exchanges.

Everything is transparent and run by the community. Even though the concept of DeFi got its due importance after the advent of cryptocurrency, today, the entire sphere of cryptocurrency can be put under DeFi.

One of the most promising off-shoots of Phore will be its usage for the Decentralized Finance or DeFi. In simple words, any finance-related function that is not under the control of a central and designated authority is DeFi. In this, no government or pseudo-government authority can regulate, execute, or implement any law.

DeFi has made it possible to take loans, deposit money, transfer funds, and earn passive interest income without any bank or other financial intermediary. DeFi is revolutionary, and there is not a speck of doubt about this. However, the underlying node’s speed and transactional volume stemming from such a system are bottlenecking its progress.

A solution was necessary at this juncture. Phore and Synapse is the ultimate solution that the entire community needs right now. So, let’s know how Phore is going to change the DeFi Industry.

Furthermore, the colossal gas prices restrict users from leveraging the most out DeFi. All the DApps of DeFi are run on Ethereum, and the fact that a small investor may have to pay around $20 just to lend and get returns on the investment is cutting short the progress.

Furthermore, the Synapse’s code execution ability is in high conformity to the native code. Here too, Synapse and Phore can work 200 times faster than Ethereum.

The combined benefit of both these attributes is lower transfer prices and an unprecedented level of demand fulfillment. Ultimately, the present-day concept of the implementation of DeFi can be propelled to a global operational scale.

Not only in addressing the operational capacity of a single platform but down the line, the same technology can become a bridge between different DeFi ecosystems. Ethereum can be linked to EON and TRON and vice versa.

Different Side-Chains for Every Function

Another monumental benefit of Phore’s Synapse can be allotting one side chain for every function. In contrast to it, Ethereum collates all the smart contracts under a single chain. Of course, this is going to get crowded and thereby reduce the speed and increase the gas pricing.

With Synapse, every singular function of DeFi, like lending, transfers, collaterals, interests, and many more, can be kept under a different shard handled by the Beacon Chain. This creates a unique ecosystem with a secure and integrated blockchain for better accessibility.

Plus, since all the shards will be connected to the beacon chain. There will be constant interoperability between all of them without compromising the security. For security enhancement, Phore utilizes the CASPER Algorithm and expedites the BLS aggregation signatures.

There are two great things involved with Phore, one is that it works with smart contracts and they can radicalize every single industry which works on money, i.e., every industry. But, almost every new cryptocurrency platform uses smart contracts, especially those made with Ethereum DApps.

Secondly, Phore has brought to the crypt world the concept of Synapse running with sharding and there is no limit to scalability in this.

More importantly, considering the Phore’s masternodes and staking rewards, the longtime loyal holders of the Phore can get up to 20% ROI per annum. However, this is only after adhering to the standard collateral required to run a masternode.

With Synapse in the picture, the collateral demands will reduce to a great extent, and everything will work on a new model, Validator Nodes. These user-created validator nodes will stake, where the user will get the ability to create more than one node.

However, the details of such a system are yet to be confirmed by the development team. Still, the potential to earn a passive income with Phore Synapse will be better, mostly because of the lower barriers and costs to entry.

Just as the inception of Ethereum changed the scales of operation and blockchain’s functionality, Phore is here to reinvent the wheel. In other words, Phore may be preparing the users for a future where global financial transactions can be addressed and executed without any central figure playing the role of a mediator or a manipulator.

It will be a completely new ecosystem with a lot of new characteristics and integrations. All in all, Phore has the potential to drive change in the entire DeFi sphere, and it may be the Archstone that will hold the decentralized global finance together.