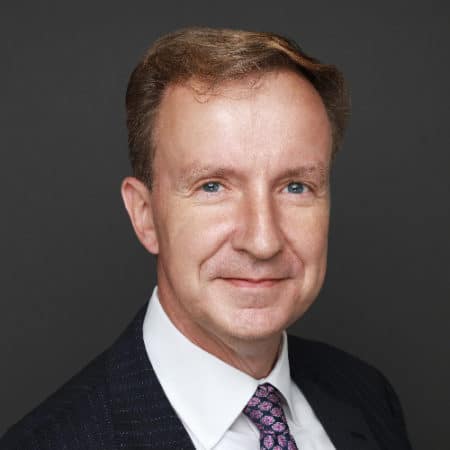 Asset tokenization has begun to reinvent the traditional financial system. Asset tokenization, the process of digitally encrypting asset titles, licenses, and other rights into tokens, challenges the status quo of financial and legal settlement with its numerous benefits.

This movement to put real assets and securities on the blockchain offers improved security, transparency, and cost settlement compared to existing systems.

We got the opportunity to interview former Morgan Stanley managing director, Patrick Springer, on the future of asset of tokenization. Additionally, we got to ask about the emergence of Polybird, an end to end issuance & exchange platform for tokenized assets where Springer currently serves as a member on of the board of advisors.

Patrick Springer is a finance industry veteran, who has had over twenty-year career at Morgan Stanley where he served as a Managing Director in their institutional securities business. As a leader in their global equities business, he advised North-American based institutional equity investors and led the distribution of numerous international equity offerings deals. Over the past ten years, Springer has helped raise over 50 billion dollars of capital for global corporations in technology and other industries.

What do you see is the significance of asset tokenization? What effects will it have on finance in general?

There is a huge opportunity in the financial markets that goes beyond creating an alternative system of trading and settlement with a much lower cost structure – there are more efficiencies to be wrung out of the current financial settlements system, especially in global payments.

Blockchain is an enormous threat to the current system of consumer credit payments and bank transfer fees. Digitizing equities and bonds for major corporations will have its place too.

There is an enormous white space market opportunity between the world of public companies listed on the leading global exchanges on one side and the world of small entrepreneurs raising money via nascent crowdfunding networks on the other.

Asset tokenization will additionally reduce the bid/ask spread between private securities, both private equity and private credit, that can reduce the costs of entry and exit for retirees and pension holders who invest through their asset manager.

There is also a giant opportunity to make different types of real estate investments available to more investors – and at the same time to make more financing channels available to real estate developers of all sizes.

Tokenizing assets will reduce frictions in the market. Listing them on a global marketplace where more investors can evaluate, value, and transact more seamlessly will lead to better capital allocation and a more efficient economy.

The number of companies publicly listed on the US stock exchanges has halved since the year 2000. There are many reasons for that, but most of them lead to the conclusion that our current capital markets do not address the needs of large swaths of the economy. Digitizing assets can bring benefits to asset markets that are currently private in nature and have a lot of cost frictions.

You spent more than 20 years at Morgan Stanley, latterly as Managing Director. Morgan Stanley has put out mixed signals about blockchain, at times likening it to the dot-com bust, at times praising it. Do you think Wall Street is currently bullish or bearish on blockchain technology?

I no longer work for Morgan Stanley, so I am not representing their views. But I would say that Wall Street companies will adopt aspects of blockchain if:

1) It is an asset that their core clients want to trade with them, such as Bitcoin futures, and

With regards to the former, the demand for bitcoin futures and ETFs by core institutional investors has still not been determined yet. The damage from the crypto meltdown in 2018 plus the numerous regulatory issues will take time for the market to digest.

On the latter, large incumbents in trading, settlement, and payments already have such large market shares and current systems are reasonably efficient for existing uses that there is not a lot of incentive to be an aggressive first-mover.

Blockchain is inherently disruptive, so the Wall Street majors will move into blockchain only when new types of competitors, security concerns, or new products make the investment attractive.

Were you involved at all in Morgan Stanley’s Blockchain initiatives? How did you first come into contact with the technology?

As a markets-focused investment specialist at Morgan Stanley, I spent a lot of time talking to investors and our research team in 2016 and 2017 about where blockchain technology and cryptocurrencies fit in as an investment theme for institutional investment, but I did not play any roles in the company making decisions about crypto investments.

I became materially involved with blockchain technology when I met Harish Gupta, CEO and co-founder of Polybird Exchange, last summer.

What will 2019 hold for the blockchain industry in your opinion? Will major financial institutions play a role?

Despite the crash in cryptocurrency and ICO prices, blockchain-based securities are here to stay. I say that because there is increasing confidence in stable coins, and there will be new types of blockchain securities for investors to look at. Tokenized assets, meaning digital tokens of real assets will begin, creating opportunities in many different types of asset markets.

Institutional and accredited (investors with at least $1 million in net worth) investors will be attracted to an emerging asset class of tokens that provide ownership interests more easily or provide streams of income in a secure manner. Over time, bulge bracket players will look to provide investment solutions for their clients. How did you get involved with Polybird?

Harish Gupta and I crossed paths briefly at Morgan Stanley, and this past summer we met and discussed my joining as an advisor. Under the leadership of Harish and his co-founders, I found his vision to develop a brand new asset market extremely compelling.

Polybird Exchange is an end-to-end issuance & exchange platform that will facilitate the buying and selling of tokenized assets. Polybird’s business is to create a marketplace for digitized assets, and the firm is creating a platform, powered by blockchain, to be flexible such that it can work globally and support multiple assets.

Whereas almost all blockchain exchanges are exclusively for cryptocurrencies and utility tokens, Polybird is focusing on developing a marketplace for tokenized assets, aka blockchain securities, whose underlying assets are real estate, private equity, private credit, and fixed income securities.

Polybird is registered in the U.S. but not open to working with US citizens, is that right?

In 2018, much of the capital raised in the blockchain and crypto markets were for coins or utility tokens, and many issuers were trying to avoid recognizing their offering as a security offering. But for Polybird, tokenized assets are securities, and we plan to be compliant with resident regulatory agencies.

This means that the platform will be more likely to be dealing with accredited and institutional investors, not retail investors.

What is the significance of the SEC’s stance on the majority of cryptocurrencies as securities? Has this made it harder for you to navigate the waters of crypto?

ICOS and tokens that came to market without the appropriate dialogue with and understanding from the SEC, FINRA, and other regulators, created a negative branding for all participants in the “crypto” space.

The regulatory outlook is indeed very challenging given that everyone, including the regulators, is in new territory. But we see the market for digital assets as an opportunity to make assets more transparent, more tradable, and more efficient, which regulators will ultimately appreciate.

I think there is a lot of demand from both the crypto and investment community for the regulators to provide additional guidelines and more clarity on the type of offerings and marketplaces that they will support. But it is hard to say when that will transpire.

Economics will drive the inevitability of it. If blockchain can be made to deliver what is required for a more robust and lower friction asset markets, then asset tokenization will occur. The internet has very much delivered on the initial dreams of creating a digital information highway and communications medium.

Blockchain is what will allow people to own and control both physical and virtual assets digitally and securely and allow them to transact with them more cheaply and with much lower costs.

Can you give us any hardline predictions for 2019?  When is the bull market returning for cryptocurrency?

A bull market for crypto will come again when all the speculators have exited, i.e. when investors who believe in the greater fool theory of selling the same asset to someone but at a higher price, all leave. It will also come again when there is a great shakeout in the number of cryptocurrencies and utility tokens – there is no value to having an unlimited number of digital currencies sprouting from numerous forks.

However, it is also important to remember that Bitcoin plays a very important function in countries around the world that are bankrupt or have a deep currency crisis. As bitcoin laps time and makes good on its promise to cap the number of coins it can print, mainstream investors may take a renewed look at it again.

How feasible is the tokenization of publicly traded companies on the Blockchain?

It’s entirely feasible, but the use case for doing it has to be fully developed and thought out. Currently, equities of public companies in major economies like the US trade and settle very efficiently. Liquidity varies by security but that depends on the underlying interest in the fundamentals of that security.

Tokenizing a currently existing security does not necessarily mean that there will be sufficient demand and liquidity for it. In the United States markets, there are many overseas ADRs that have very low liquidity. In Japan, for example, there used to be many US companies listed on the Tokyo Stock exchange, but there was very little demand there and eventually, most companies pulled their listings. There needs to be a use case.

Do you think this will be one of the first mainstream use cases for cryptocurrencies? If not, what will be?

Digitized or tokenized asset offerings which are done in compliance with local regulators will certainly be a key catalyst for mainstream investors to see the value of blockchain securities. I also think that stable coins that can successfully establish themselves as a means of cross-currency payment with ultra-low fees would also be a major catalyst.

When did the tokenization of assets officially begin?

Tokenization of assets began last year in my view with the offering by Harbor of South Carolina real estate. The tokens are available on their website. When more tokens and issuers come to market, a market place all need to develop.

Thank You for your insights and time!

The post Polybird’s Patrick Springer on the Future of Asset Tokenization appeared first on CoinCentral.

A lightning network payment has been making global rounds on Bitcoin’s secondary layer. The payment, slowly accumulating in value with...