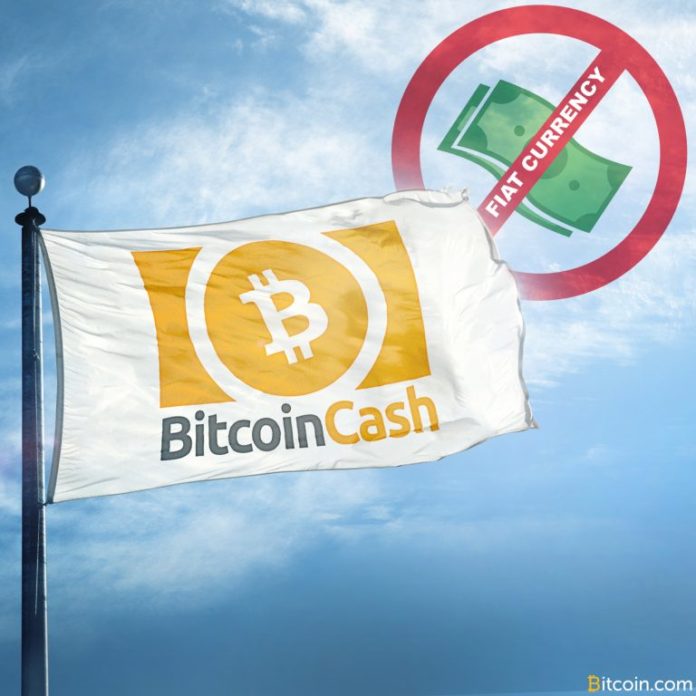 Since the inception of cryptocurrency, some critics have dubbed it “just another fiat money.” This has been the wail of anti-crypto combatants. They have succumbed to grasping at straws in order to manufacture any rebuttal against the thing they loathe. It doesn’t matter how valid the argument is so long as it satisfies their desire to smear crypto.

Using this kind of non-argument is akin to raising the dead. When one cannot count on truth to win the day, they reach back in time to deploy old, tired bromides. Jimmy Song performed his own ritual for the dead during a debate with Roger Ver at the Coinsbank Cruise on September 10th.

Instead of articulating a legitimate problem with bitcoin cash, Jimmy claimed it is a “centralized fiat money.” This is virtually the same broken premise crypto-antagonists have trotted out ever since Satoshi penned the white paper, including naysayers like Peter Schiff. It was a tragedy to witness, because fiat currency means something entirely different than what Jimmy believed.

What is Fiat Currency?

Fiat currency is money that is issued by decree or formal authorization. To be more specific, by decree means it is backed by a government’s alleged authority, and then enforced on the population by law — at the barrel of a gun. Generally, when a money is decreed by government, using other kinds of competing paper money is considered a criminal act.

For example, when Bernard Von Nothaus created the Liberty Dollar and attempted to put it into circulation, thugs in costumes raided his company headquarters. They put him in jail and charged him with counterfeiting and fraud.

Here is the definition of “fiat” according to Investopedia:

“Fiat money is currency that a government has declared to be legal tender, but it is not backed by a physical commodity.”

Why Bitcoin Cash is not Fiat currency

This is why bitcoin cash, or any other crypto, is not fiat. It is not decreed or authorized by government. It is not “legal tender.” It is possible that a digital currency can eventually be decreed, but then it is likely the “cryptocurrency” in question will not be cryptocurrency in the traditional sense.

For example, the Russian government has talked about creating the “Crypto Ruble,” which would act as their version of cryptocurrency. The problem is it would not be minable, and it would be manipulable by that government. A true cryptocurrency would not possess these “features.”

Bitcoin cash is an open-source and peer-to-peer cryptocurrency that anyone can get involved in and use. It is not “Keynesian.” The amount of cryptocurrency issued into existence cannot be arbitrarily determined. It is determined by the protocol, and is the exact same as bitcoin: 21 million units will be minted by year 2140.

Keynesian economists believe the economy should be controlled and stabilized by government printing of money to prevent economic catastrophe. The bitcoin cash protocol functions antithetically to Keynesian ideology. No one can arbitrarily inflate or deflate the supply of bitcoin cash.

Clearly, Jimmy did not read the primary source on Keynesian economics as Roger pointed out.

Mining in bitcoin and bitcoin cash is more centralized as a result of limited adoption. This means only a handful of mining pools control the networks. However, the more users that begin to adopt cryptocurrency, the more mining operations will appear. This will mitigate the problem of centralization. Regardless, what matters is cryptocurrency remains censorship resistant.

Crypto Paternalism and the Case for Op-Codes

Jimmy’s claim that bitcoin cash is paternalistic was the most problematic comment of the debate. A paternalistic cryptocurrency would mean that it is controlled by an oligarchic cult of developers. In terms of the ecosystem, bitcoin cash does not fit this criteria. It is truly open source in the sense that developers have wide-ranging leeway to build protocols on top of it.

Many of the op-codes have been re-enabled on the bitcoin cash protocol. This means developers have the ability to create new tools and programs. Some have already been developed, such as the Wormhole protocol and platforms like Memo.cash. Ironically, this is impossible on the bitcoin core network because of a mixture of high fees, disabled op-codes, and developer hegemony.

If anything, bitcoin core is more “paternalistic” and strict in terms of who has the right to develop on top of the protocol in a truly open source fashion. What protocol is really the most “paternalistic”? In the end, Jimmy could not muster a strong argument against bitcoin cash so he resurrected a long-dead one and resorted to hand-wringing and arm-waving. The tragedy is there are certainly questions that need to be addressed regarding bitcoin cash, but it being a “fiat money” is not one of them.

This suggests Jimmy did not intend on making a case against bitcoin cash, but instead wanted to incite drama during a debate. It was just surprising that he would have premised his whole position on an argument that some people make against bitcoin core itself. That alone should have signaled to him that he was reaching.

Do you bitcoin or bitcoin cash is fiat currency? Let us know in the comments section below.

Europol’s new cybercrime report has found that Bitcoin (BTC) remains the most popular form of crypto for illicit uses, but...