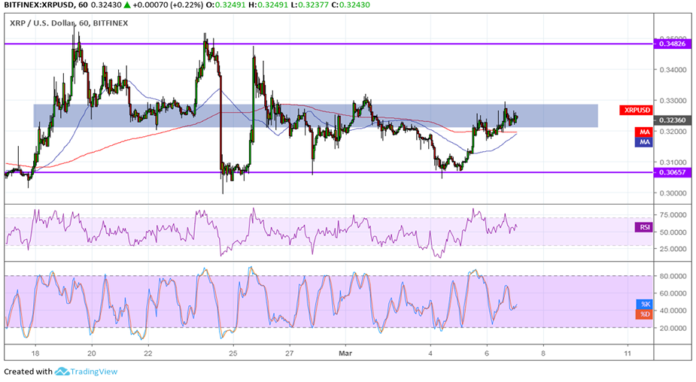 Ripple recently broke out of the descending triangle pattern visible on the 1-hour chart. Price is currently stalling at the mid-range area of interest, still deciding whether to keep climbing to the top or retreat to support.

The 100 SMA is below the longer-term 200 SMA for now but looks ready to cross higher and signal a pickup in bullish momentum. This might be enough to spur a move past the .3300 mark and onto the highs around .3500. Price is also above both moving averages as an early indicator of bullish momentum.

However, RSI is turning lower from the overbought zone to indicate that sellers have the upper hand. In that case, Ripple might still fall back to support at the .3065 area or at least retest the broken triangle top.

Stochastic also seems to be on the move down but is changing its mind halfway through, suggesting that buyers could take over again from here.

The recent rallies in cryptocurrencies are being attributed to the strong gains in litecoin, helping improve the overall sentiment in the market. Apart from that, anticipation for stronger institutional interest is also in play as many are waiting for Fidelity to launch their platform this month.

Ripple has been pretty consistent in striking partnerships with more and more companies, although it could face stiff competition from the likes of JPMorgan Coin. This digital asset and platform could take most of the functions as Ripple’s xRapid and xCurrent offerings, and other banks might find it more reliable to partner with a big well-known institution instead.

Still, CEO Garlinghouse said in an interview that it’s “great” to have major financial players like JP Morgan “leaning in” but that “That’s the only nice thing I’m going to say about this.”