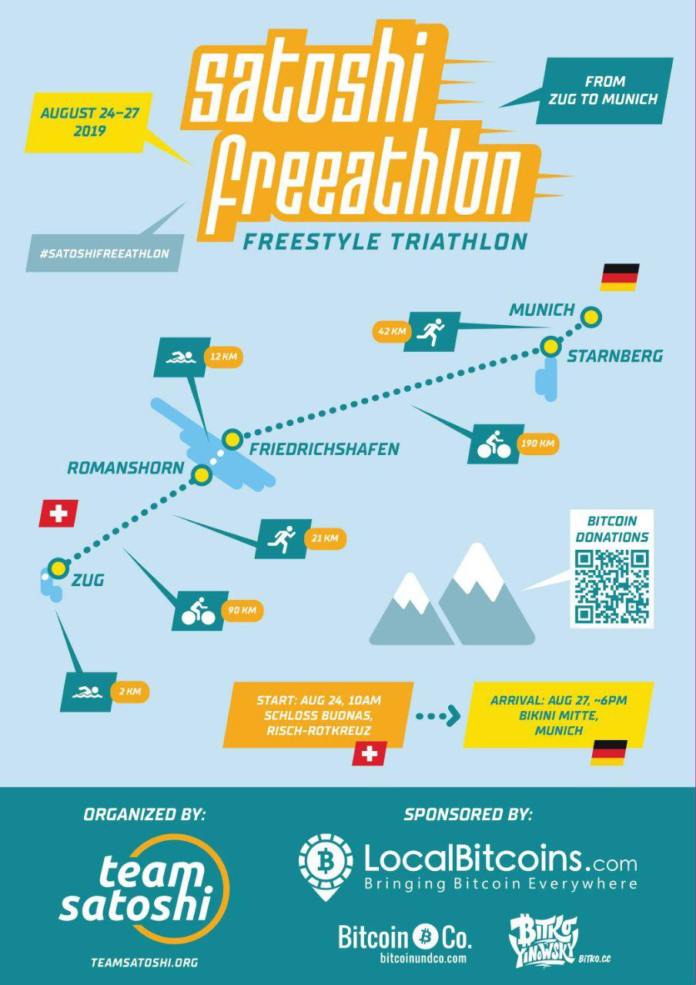 Triathlons are some of the most physically-demanding and spectacular athletic trials. Most of the time, this arduous display of strength and endurance has participants push their limits by swimming, cycling and running for 30 miles or more. But when spending bitcoin and promoting the principles of “A Cypherpunk’s Manifesto” (including human rights, freedom of information, free speech, privacy and transaction freedom) are the fundamental goals, any sporting event becomes a lot more interesting.

Between August 24 and August 28, 2019, seven athletes from three different nations will take on a 222 miles (357 kilometer) challenge which begins in the central city of Zug, Switzerland, and concludes in Munich, Germany. The name of the triathlon is the Satoshi Freeathlon, and its purpose is to raise public awareness around the importance of decentralization in power and money.

Originally, Bavarian entrepreneur Vitus Zeller sought to create some positive Bitcoin-related media coverage with a 621 miles (1,000 kilometer) bicycle ride across the Swiss Alps. The initiative, which marked the 10th anniversary of Bitcoin, was called Tour de Satoshi and put him in the middle of a 10-day trip from Florence, Italy, to Frankfurt, Germany, and challenged him to pay for his hotel rooms with bitcoin.

“I scouted more than 50 hotels to be able to stay at seven hotels,” Zeller told Bitcoin Magazine. “And doing such a crazy bike tour in winter was, in every hotel, received as a special thing. I am quite sure the staff in all of those hotels were talking about this … so I’m sure it raised attention there. Also, en route, people asked me what I was doing and why I was travelling by bike in such harsh conditions.”

After the success of this first attempt, Zeller decided to raise the bar by creating the Satoshi Freeathlon.

“I decided to continue, because Tour de Satoshi was perceived well and I got a lot of great feedback,” Zeller said. “At bitcoin events, suddenly people came up to me and recognized me and were excited about what I did.”

This time, it’s not just about him facing a physical challenge accompanied by bitcoin alone, as six other athletes are involved. And they’ve added in a more complex trial where they must pass a Lightning torch from one to the other. During the event, spectators can make donations and basically increase the positivity of the subsequent media coverage: the more satoshis get raised, the more buzz there’s going to be around the event.

The torch concept is a mix of the Olympic flame and Hodlonaut’s #LNTrustChain initiative from earlier this year. Consequently, the participants can be followed throughout their journey via Twitter, and anyone interested can search for the #tstorch hashtag. From there, donations can be sent via Lightning Network or to the following BTC address: 173SRmGLwHW7QZDsFW9RLpggn3iBboL7Ns. In the true spirit of sportsmanship, the donations don’t get officially validated until the moment when the torch gets passed to another one of the seven athletes — call it a special timestamp, if you will. Furthermore, after each day the social media accounts will be updated with highlights of the trials.

Among the best known bitcoiners who are participating in the Freeathlon will be LocalBitcoins founder Jeremias Kangas, Bitcoin & Co. podcast host Anita Posch and Frankfurt School Blockchain Center’s Veronika Kütt. The Team Satoshi Torch (#tstorch) will be lit on August 24, 2019, by Zeller who begins his journey in Zug, and last recipient Kütt will arrive at the Southern German destination four days later. Finally, the #tstorch will be taken to the Bikini Mitte Bar, the only place in Munich where it’s possible to pay with bitcoin on the base layer or via Lightning.

The event is meant to expand the Team Satoshi project by encouraging more athletes to get involved in promoting the philosophical values of Bitcoin. In this sense, a share of the satoshis raised will be used to support many more athletic trials involving an increasing number of enthusiasts.

“Mostly, [bitcoin] is only talked about as simply a speculative asset, drug money or an energy-consuming technology,” Zeller said. “I believe bitcoin needs more voices from within the ecosystem that show openly that they stand for this and sports is a great way of doing that. Sports have historically been a powerful tool to grab peoples’ attention and emotions.”