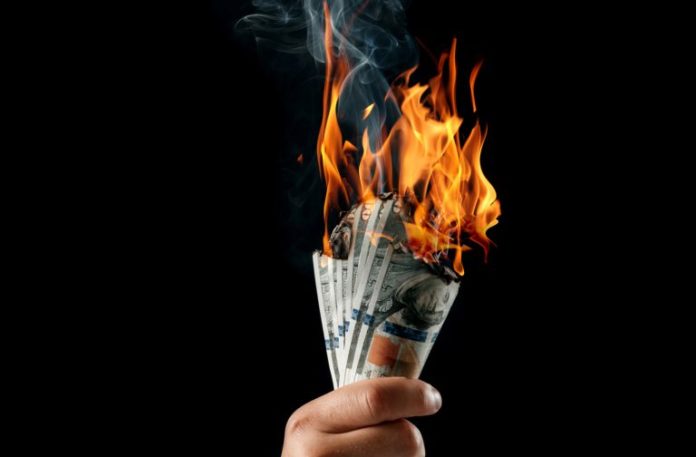 Financial regulators all around the world have been cracking down hard on ICOs for promising more than they can deliver. At the same time governments and central banks are pulling off far worse scams, such as QE, wiping out the savings of everyone that depends on them. To hide this fact they use obscure economic jargon to confuse and distract the public, with the latest term being negative yields.

Germany Buys Its Own Debt at Zero interest

Wednesday, 21 August, will be noted in the economic textbooks as a turning point in the history of fiat central banking and possibly as the harbinger of a new global recession. On this day, Germany, the world’s fourth largest economy and the main economic engine of the Euro zone, sold its 30 year bonds at a negative yield.

The German 30 year bonds yields have been going down hard recently, but this was the first time ever that they were actually sold with a coupon officially set at 0%. What this means in simple terms is that if you were to lend your money to the German government for a 30 year period, you will have to pay for this privilege instead of getting a return like you would expect from any sane investment.

So why would anyone in their right mind agree to make such a terrible trade as investing in negative interest yields? Well, they may expect returns on German bonds to be even worse later on and want to lock in this level while they still can. Others are just legally forced to, such as some large pension funds around the world that must invest a fixed percentage of their holdings in so called “safe” government bonds.

As you would expect, there weren’t many takers for this offer, and less than half were actually sold to investors. Out of a target of borrowing 2 billion euros from the market by the German government, just well under $900 million in bonds were issued successfully. The remaining majority of the 30 year bonds in this mostly failed sale had to be picked up by the Deutsche Bundesbank, Germany’s central bank. This by itself, happening to such a traditionally well trusted government as the German one, may indicate that the global financial system is headed for a major shock.

Negative Rates Will Come to the US Soon Enough

While serving as an ominous benchmark for the market, the German 30 year zero coupon bonds sale is not going against the trend elsewhere. In fact, according to the latest estimations there is already more than $16 trillion in government debt around the world bearing negative yields. This is also happening in advanced economies such as Japan, France, Spain, Sweden, Belgium, the Netherlands and Denmark. The world’s largest economy, that of the United States, has still not seen negative interest bond issues, but that too appears to be just a matter of time, with U.S. Treasury yields rapidly decreasing.

One reason that negative yields are coming sooner or later to the U.S. is that President Trump is pushing the Federal Reserve hard in that direction. This is despite the traditional conception among economists that the central bank is supposed to be completely independent from political influence. The American leader took advantage of the historic German bond sale, to increase his public campaign to pressure the Fed to take measures which might increase inflation, but artificially boost parts of the economy he favors such as exports. If the central bankers resist his calls, the president will mostly likely blame the Fed for causing any downturn or possible recession ahead of the 2020 elections, citing a refusal to heed his advice.

….WHERE IS THE FEDERAL RESERVE?

Professional investors in the U.S. were already worrying about negative Treasury bond yields before Trump made his remarks on the German sale, as the Wall Street Journal reported earlier this month. Mark MacQueen, a bond manager and principal at Sage Advisory Services, explained that: “If you proposed negative rates 10 years ago, people would have laughed you out of the room. Today people are getting on board the negative-rate idea very quickly.” Andre Severino, head of global fixed income at Nikko Asset Management, commented: “We’re a bit perplexed about the level of yields. It’s kind of like Armageddon is being priced in.”

QE and Currency Wars Are Robbing Your Savings

Financial regulators all around the world have been cracking down hard on ICOs in recent times. They mainly accuse them of issuing securities backed by nothing, to investors who only buy them in the hope that they can sell them to other bag holders as their price will rise in the future. It is hard to see how government selling negative interest bonds doesn’t fall into exactly the same category. Moreover, this is only the latest example of how governments and central bankers are scamming people out of their savings since the last financial crisis. A decade ago they were printing trillions of dollars with QE, and recently they started currency wars by lowering interest rates. Exactly 48 years ago, in August 1971, U.S. President Richard Nixon suspended the convertibility of the dollar into gold, leaving the world’s reserve currency not backed by any real asset. It is impossible to predict how such things will develop, but with recent developments it is now very unlikely that in half a century from today the same fiat system will prevail. The best devised replacement, from the point of view of freedom loving individuals, is a cryptocurrency system based on provable mathematical principles instead of empty government promises.

What do you think about what governments and central banks are doing to your money with QE and negative yields? Share your thoughts in the comments section below.

The post Smokescreens and Mirrors: How Does a Country Do an ICO? They Call It QE appeared first on Bitcoin News.

Crypto exchanges with the lowest rating still dominate the industry, according to crypto analysis and pricing data provider, CryptoCompare. D-E...