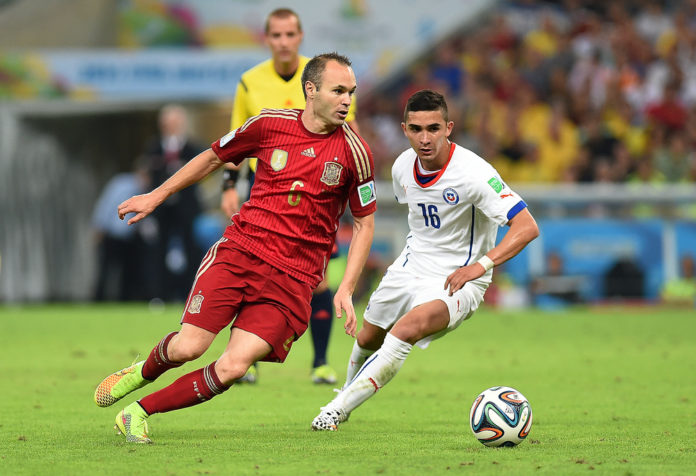 The three former FC Barcelona players and the Spanish national team are creating a social network for sports fans worldwide. The developers want to use the FIFA World Cup to test the application for the first time.

It will be the last time that Andres Iniesta stands on the big stage of world football. After he announced his departure from his regular club FC Barcelona at the end of the season, he will also end his highly successful national team career after this World Cup. So the time has come to deal with something new and to plan the career after career. The includes for Iniesta apparently also a blockchain application.

He teamed up with FC Barcelona’s former captain, Carles Puyol, to work on the blockchain platform Olyseum. Puyol will be remembered most of the German fans by the winning goal to 1: 0 against the German team in the World Cup semi-finals 2010 painfully. Also on board is the lesser known Ivan de la Pena, former teammate of both in Barcelona and in the Spanish national team.

With Olyseum, the three Catalan football players want to build a closer bond between active and former footballers and fans. So, with the help of Smart Contracts, we want to introduce an incentive program for the fans who participate in the network. These entries will be rewarded in the form of exclusive merchandise, VIP tickets and unique idol experiences. In Spain, the Blockchain platform has been in operation since 2016. It is also one of the most popular sports apps in Latin American countries, which for historical reasons have a close bond with Spain.

“Throughout my career at FC Barcelona, ​​I have had the unwavering support of millions of fans worldwide. Andrés, Iván and I have joined forces to give the fans the opportunity to participate in a real way. Together we want to create a place of cooperation for the lovers of this beautiful sport and to interact with users who feel just like us “,

But not only (former) footballers are involved in the project, also for the technical background is taken care of. The company’s CEO, Carlos Grenoir, is a PhD in computer science and telecommunications and comes from the information security and neuroscience field. He was also involved in the creation of Quantum Fields Technologies, which deals with security projects, research and development of AI and smart social networks.

The app will be tested for the first time with fans in the framework of the current Football World Cup. Fans from all over the world come together in Russia to celebrate a football festival together. The best opportunity for the Olyseum project is right here tonight (15.06.2018). As Andres Iniesta plays with his Spanish team against the Iberian neighbors Portugal.