Today we will be taking into account the past trends of the Stellar cryptocurrency and market opinions available online in order to create an XLM price prediction for October 2019.

Stellar is a blockchain-based network that is aimed at facilitating decentralized and fast fund transfers and exchanges between crypto and fiat currencies. The blockchain is based on a unique consensus method called the Stellar Consensus Protocol. The project was launched in 2014 by the co-founder of Ripple and founder of Mt. Gox, Jed McCaleb.

Stellar was built with a focus on integrating distributed ledger technology (DLT) into the current structure employed by financial entities.

In our XLM price prediction, we will be looking at Stellar’s relationship with Bitcoin. With correlation measured on a scale from -1 to 1, XLM has so far had a correlation coefficient of 0.90+ throughout most of its past price trends, with small dips to zero due to XLM not being able to keep up with bitcoin’s sudden price surges. 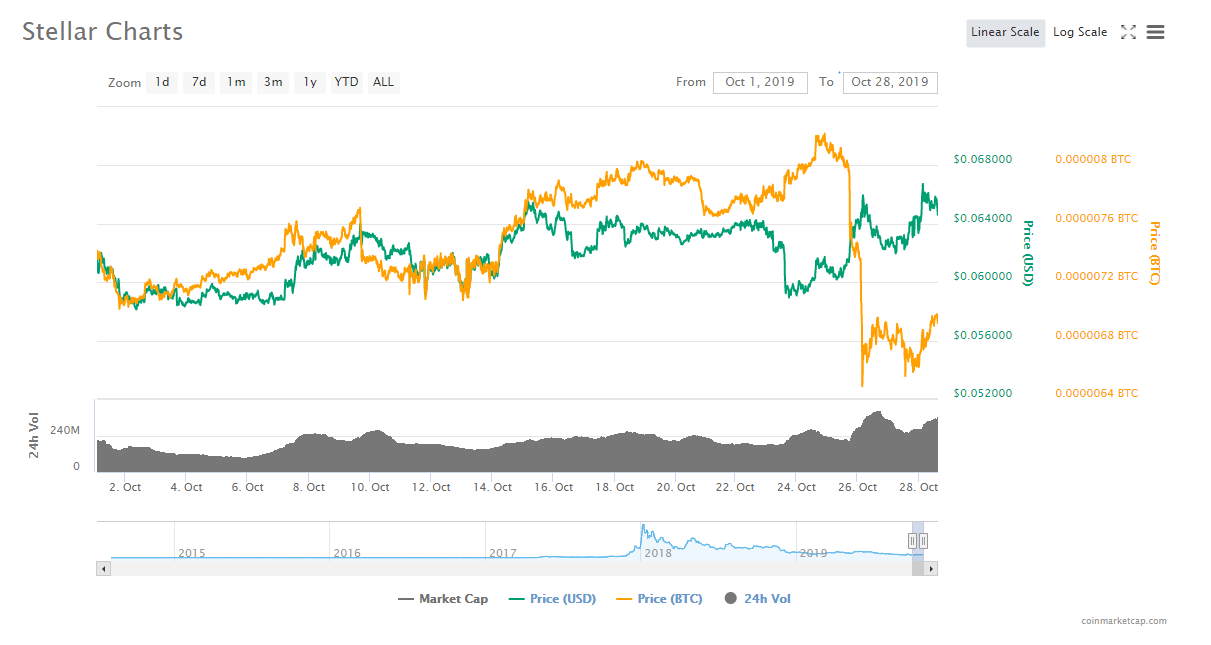 Last month, Stellar had a mostly positive performance, which was further boosted by the announcement from the former Mozilla COO and his affiliation to the Stellar Foundation.

According to reports, Stellar Lumens (XLM) are working towards expanding their dominance on the market. From the head of partnerships for Stellar Foundation, Lisa Nestor, is currently engaged and active in various countries all over the world (mainly South America and America) in order to improve all of Stellar’s strategic partnerships.

On October 1st, Stellar implemented Stellar-core v12.0.0, which brought stability improvements and three Core Advancement Proposals. The rest of the month did not see any announcements on new developments from the team.

As several crypto sites have made their own XLM price prediction for the month of October 2019, we have decided to incorporate some of them in our article to give you a better feel of how the market feels towards the coin’s possible future evolution.

Longforecast expected Stellar to have an opening price of 0.062 Dollars, which is close to the actual price of the coin on October 1st. They predicted that the highest value the coin will reach this month is set at $ $0.076, and the lowest price set at $0.057. The forecasted month average is at $0.067. The Stellar price that will close the month is expected to be at $0.071, change for October 14.5%.

Randforecast also predicted the maximum and minimum value for the last day of the month of October:

This has been our price prediction for XLM for the month of October. Keep in mind that no one can accurately predict the price of any asset, and all the information is mostly an estimation on the course of the coin’s performance, so we urge you to use this data wisely in your trading.