Specifically, a text published on Reddit and in shared on some Telegram groups says that the company has performed an exit scam. The text also implicates Moshe Hogeg, CEO of Sirin Labs.

The story has picked up momentum; Dominik Schiener, co-founder of IOTA, wrote this on his Twitter profile:

I always suspected @moshehogeg from @SIRINLABS to be a shameless scammer. Now we finally have proof: https://t.co/JWJRqISry8. Wonder how much money he stole from Sirin and other projects he was involved in. He and his companies give the entire ecosystem a bad reputation.

It should be noted here that Sirin Labs’ new mobile phone, to be released in November, was supposed to be using the IOTA blockchain, but in August announced that it will be using Ethereum instead.

The accusations (part one)

The text in question lists a number of wallet addresses, claiming to have found irregularities in the movement of STX tokens. Specifically, it claims that vested tokens (created after the company’s token sale) were withdrawn from recipient wallets by Stox using a revoke function, and these tokens were then sent to a “strategic partnership address”, and shortly afterwards sold on. 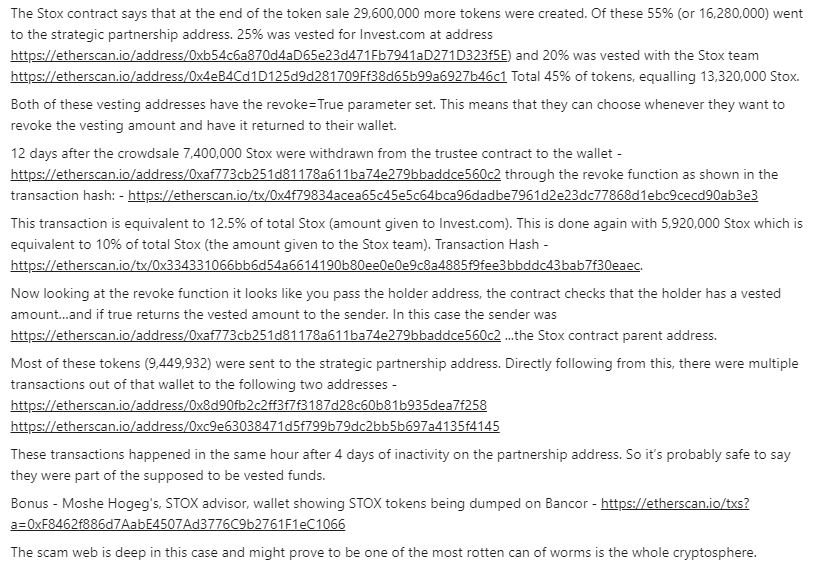 It also says that Hogeg “dumped” his STX tokens on an exchange after receiving them.

“This anonymous source re-published a message that was published and already answered more than a year ago (26.9.2017). This source copied the message and shouted “Exit scam” without having any cause whatsoever.”

Finance Magnates looked at the transactions listed, and found that they did indeed all take place more than a year ago.

In November 2017 Stox responded with this explanation: the created tokens were actually tokens purchased by private investors before the public sale. Money taken was converted to Ethereum. This was purchased by Hogeg. Hogeg used this money to purchase additional STX following the company’s public sale. The company said:

“Additional Stox tokens were purchased by Moshe as he is a huge fan of Stox who strongly believes in what we are doing as he has said many times. There has been no unethical behavior, nor any dumping of Stox token.”

In its latest statement, Stox said:

“These are private transactions conducted by Moshe Hogeg on the secondary markets. These transactions are not related to his involvement in the company at all and were concluded independently.”

Regarding the revoked tokens, Stox says that the revoke function, which is available only to admin, “…was used right after the ICO in order to fix vested amounts in invest.com’s and Stox’s team wallets. The revoked tokens were transferred back to the vesting contract, and then reallocated according to both the terms mentioned in the white paper, and also in accordance with agreements with our strategic partners and advisers.”

It adds: “From time to time the revoke function is used to adjust vesting terms according to new or ended partnerships. For example, when an employee leaves our employ, Stox revokes his vested tokens and return them to the vesting contract.”

The text also claims the following:

– That the company “abandoned their office, firing all staff…”

Regarding Peretz – Peretz is the CEO of Commologic, and is listed on LinkedIn as the CEO of Stox. He explained in a Medium post (on the 30th of October):

“My Journey with Commologic & Stox has been one of the best working experiences. As the CEO of Commologic … we have assisted building the Stox platform…Due to the decision of STX Technologies to terminate the service contract with Commologic, Commologic will no longer continue its business activities and I have decided that it is now time for me to pursue a new venture and take my career in a different direction.”

In a tandem announcement, Stox confirmed that it will be run exclusively by STX Technologies Ltd, a company based in Gibraltar.

“Stox terminated the contract with AmaZix in October because the parties could not reach agreement on the commercial terms. Stox is currently in talks with AmaZix with the aim of re-establishing the relationship and renewing the contract.”

Regarding the third claim: interestingly, this is not the first such accusation. On the 18th of October, a source told Finance Magnates that the company had cut its workforce from around 20 people to only five. We reached out to the company at the time, and a spokesperson told us that the downsized office was the result of the end of the deal with a company called ‘Chromologic’, which provided “R&D and community management services”.

Its latest statement implies that the closing office is because of the ending of the contract with Commologic. Says Stox:

“In this regard we have moved development an operation to Europe…We say goodbye to the Israeli team that has been with us from the start, as part of the company’s decision to move finally towards a more decentralized platform.”

Stox is a Tel Aviv-based company which raised more than $30 million in its ICO, which was endorsed by none other than Floyd “Money” Mayweather.

Calling itself a “blockchain prediction markets platform”, its developers say that the platform will predict the outcome of specified events based on the information received from users. Users are awarded STX tokens for making predictions, and can win more if they predict correctly.

The STX token currently has a market value of $1.8 million, according to coinmarketcap.com.

Stox was launched by invest.com, an internet financial trading firm, via Bancor, a Switzerland-based blockchain firm, in July 2017. In October 2017, the STX token was integrated into the Bancor network, which allows users to easily convert tokens to other tokens.

On the 11th of October, a PR piece on a website called Crypto Reporter celebrated the Stox application reaching number one on the application ranking website stateofthedapps.com, where it was registering well over one thousand daily users. Peretz said at the time that Stox had hosted over half a million predictions since launch, had partnered with 50 ICOs, and that the network had a user base of 20,000.