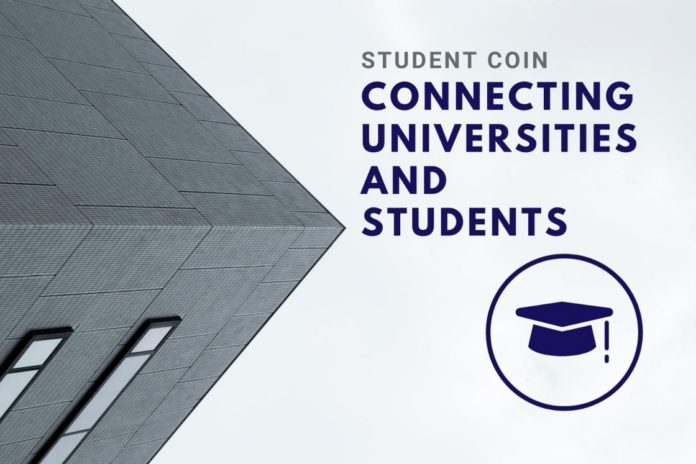 Student Coin is a University-derived token system entering the market to connect global students with the realms of cryptocurrency. STC is accessible to all connected students with a dedicated education portal, with the aim of helping students understand the concept of blockchain and cryptocurrency.

Malcolm X once said that “Education is the passport to the future, for tomorrow belongs to those who prepare it for today.” Cryptocurrency with its unacceptance by some governments and decision makers might have suffered a difficult route, but at some point, this reluctance will be breeding doubt and uncertainty for the younger generation.

A solution whereby the core functionalities of cryptocurrency is taught and fostered to the masses at a younger age. Student Coin (STC) is built on these lines to bring cryptocurrency to the students as they hold the key to the future.

This cryptocurrency is built by the students, for the students. One of the critical objectives of STC is to create an ecosystem of cryptocurrency maturity within the students. To also ensure that they are prepared to take this technology forward when entering the world as an educated and ready-to-lead individual.

Giving the Power to the Students

As per the official statement, the goal is to provide education about blockchain technology. The development team plans to leverage the networks and mass appeal of a university to inculcate the technology’s nuances early on.

STC is created by the students of several universities, entrepreneurs, and research clubs across universities. The synergistic efforts of a group of students to address the spread of cryptocurrency in this manner is evidence enough to say that targeting the students can turn out to be a great strategy.

Since this is a solution created for the students, they are going to play the role of decision-makers. STC Voting is a platform that will be used by the students to make decisions that will affect them directly.

This includes deciding the fate of new universities yet to be included on the network. Alongside this, blockchain is one of the most effective ways to conduct election votings, take part in student petitions, and more.

Strengthening a Student’s Knowledge about Cryptocurrency

By creating learned individuals today who are adept in the understanding and working mechanisms of the blockchain, the transition of the economy from fiat to cryptocurrency will have lesser friction. This is one of the many purposes of educating the students in universities and colleges worldwide.

At present, there are more than 450 universities that are enrolled in the STC program. All the students who are a part of these universities will also get 100 STC that they can use for voting and investing.

Tokenization for the future

The word used by this project is academically-focused tokens. This is one of the critical long term goals of setting up STC. Every single university integrated into the system can have its tokens based on the central currency STC. Further, apart from the university specific tokenization, students can do the same for single lectures and student organizations.

This will happen via the STC terminal that will allow the individual universities to create and manage their token. Simply put, if Cambridge wants to have its token currency, it can be named Cambridge tokens, and the value of these tokens will be based on STC.

So, a central currency will power up the different branches of tokens, and the best part is that they all will be connected to each other.

So, we are looking at a central repository of cryptocurrency that:

Student Coins can also be swapped for other altcoin from the Waves exchange platform and application. Primarily, STC runs on the Waves-NG protocol and leverages the Ethereum blockchain to gain security for value transfer and token exchange.

Further down the line, STC will be developed into a native student coin blockchain that will work with proof of stake.

At present, the students who own the 100 STC can also transfer their coins on Ethereum’s native blockchain to magnify their trading potential and even take part in the staking of ETH.

With having a presence in 14 countries and being listed on various exchanges, STC is an amazing concept. It is still at a nascent stage. The purpose of STC is to create a harmonious ecosystem confluence within the universities across the globe.

Where this will be a starting point, the ultimate goal is to allow the students to transact and get investments from global investors in STC to fund their projects. This means that the STC will be leveraged for other objectives, not only educational correspondence. Going forward, the STC team is planning to perform the initial Student Coin Offering that will be the key to establish STC Terminal. This STC Terminal will augment the STC Tokenization in out of the academic sphere.

When these students pass out, they won’t be reluctant to transact or invest in other cryptocurrencies because they have already been exposed to the vagaries of the technology.

They are aware of the risks and the potential. They understand how everything in the blockchain and cryptocurrency works. These students have seen the power of unanimous decision making with the highest level of encryption and cadence.