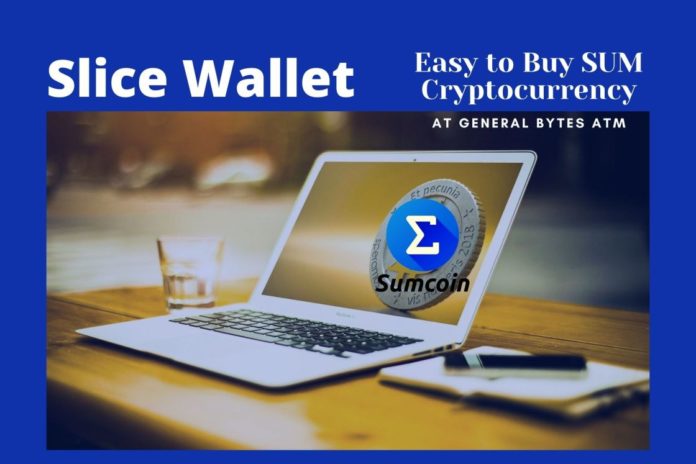 The Slice Wallet architecture involves a simplified codebase that makes it lightweight and quick to use. The Slice Wallet is basically a mobile wallet available on the two biggest platforms – Google Play Store – Android and iTunes App Store for – iOS.

The Sumcoin Development has made Slice wallet secure and safe for added peace of mind and security. To protect the wallet from malware attacks and browser flaws, the Slice Wallet incorporates features like AES hardware encryption, app sandboxing, keychain and code signatures.

The Slice wallet is also deterministic! So, in case a user loses his/her smartphone, they can access their account using a simple backup phrase. Besides, it doesn’t have a server that can be hacked or go offline. Thus, users can access their money anywhere and anytime.

Slice Wallet also provides a hassle-free user experience. It allows users to import their existing Sumcoin wallet quickly and easily. It has a sleek user-interface comprising of the best design elements from the existing wallet while stacking up more native features.

Another interesting feature about the Sumcoin (SUM) Slice Wallet is that it is compatible to use with all General Bytes ATMs.

As user goes to any ATMs operator, he gets an option to select the cryptocurrency he would like to purchase. Use will see the SUM buying option on the screen.

Make sure to have account opened in the Sumcoin Slice wallet on smartphone. User can open the personalized QR code on Slice wallet and select the Cash Limit on the ATM terminal.

Soon as user clicks “Buy” the equivalent SUM cryptocurrency will appear in the Slice wallet. ATM machine will generate receipt of the purchase.

Similarly, user can also liquidate SUM holdings and collect the cash from ATM. Well, with the General Bytes ATM integration, Sumcoin makes it really easy to use this cryptocurrency for daily purchases. Thus, unlike other cryptocurrencies that only work as an asset, Sumcoin works like real money that comes handy whenever one needs it.

Sumcoin is a decentralized blockchain that uses the script proof-of-work algorithm. The blockchain is a distributed ledger of all transactions across Sumcoins peer-to-peer network.

The native cryptocurrency SUM works on an Index algorithm that tracks the top 100 cryptocurrencies by marketcap. The SUM cryptocurrency tracks all these coins in real-time by analyzing over 600 data points.

Sumcoin (SUM) is no similar to other altcoins in the market. Its value fluctuates given by the market forces of demand and supply. However, since Sumcoin indexes the top 100 cryptocurrencies, it is not as volatile as individual digital assets like BTC, ETH, etc.

Sumcoin stands as a perfect choice for investors looking to diversify their investment in the crypto market without going through the hassle of investing separately.

With sophisticated fraud schemes seemingly overwhelming the African crypto market, there is a growing need for players in the space...