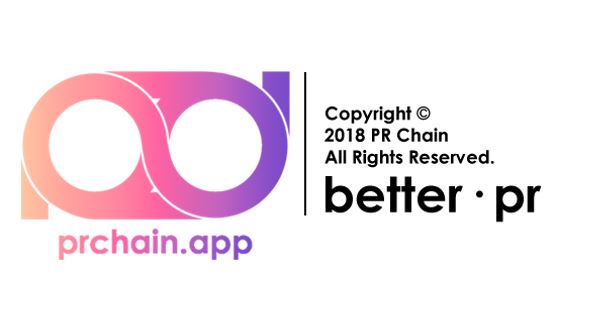 With the full development of the Internet, Internet media is now everywhere in our life. Media has grown to be the most important cornerstone of modern economy as its intangible value gradually surpasses the tangible ones. Like any other technology, media industry has encountered bottleneck, and it is one that is hard to overcome. However, blockchain technology may provide solutions to break through, and PR chain is such an innovator and pioneer mastering this technology in modern era…

The gust of blockchain was quietly picking up and has swept across the world; the myth of so many people getting rich from blockchain attracted a group of speculators. Compared with such speculators who want to become rich overnight, the founding team of PR Chain is really different. The chairman and CEO of PR chain, Zhou Haomin (Jeremy); co-CEO and COO Hu Weihang (Jason) have worked in media industry for many years and will continue to work in this field relying upon blockchain technology. They are determined to establish a compliant, reasonable, fair and just media platform. Although the creation and circulation of false news from the source is a big problem, PR chain is firmly believed that with the help of blockchain technology, the source of information can be under control.

Currently, the following problems in media market are major pain points which need to be solved:

It is difficult to confirm the ownership and protect related rights. In the process of shared transaction, media information is subject to being copied or washed by other media. Thus, their rights and interests are at risk. The sharing and opening-up of media content is no less than making a wedding dress for free for others. As a result, original content provider and media clients will not actively participate in the transaction since the originality is hard to confirm and related rights difficult to protect.

The reliability and security of news. On a centralized media platform, information precipitating will inevitably occur because news release will have to go through the platform, leading to the distrust from all sides of the platform. At the same time, media workers also worry that the centralized media platform might be manipulated by the giants, thus losing neutrality and leading to the proliferation of false information through pirating. Only when there is cross of multi-dimensional media can we maximize media value, something even Internet giants like toutiao and Weibo are unable to achieve.

The plunder of user privacy and media value. Generally speaking, mass users are source of production for all media, therefore deserve the right to read and secure what they created. However, the reality is that the user’s privacy is often plundered, sold, and illegally used in the “ chain of gray industry”. Users cannot track how their media is used and cannot protect it. What’s more, the media which users read are not theirs, so they can’t get returns in the circulation. The commercial value generated by these media users is usually exclusively owned by the App Owner rather than the APP User.

Then how does the PR Chain break the asymmetry of information, making everyone the information center, making them resource link points, and establishing such “attention economy” blockchain media platform? After thoroughly analyzing the media market and the pain points of all participators (content creators, value transmitters, disseminators and content recipients), PR Chain employs blockchain technology to perfectly solve these problems! Making use of the technology to protect information, PR Chain comes up with such a decentralized media ecosystem based on blockchain technology, smart contracts and consensus mechanisms.

Amid the rampant public blockchain chain, Zhou Haomin took a different approach and chose the media industry as a breakthrough point to create the PR Chain. The PR chain is a set of compliant, reasonable, fair, just, effective and innovative community autonomy incentives. They are committed to build the most trustworthy media credibility index, which is PR-INDEX and establish a fair, open and transparent media credibility system by rewarding content creators, value transmitters and recipients of content with largest incentives. Breaking down the user’s dimensional barriers with blockchain technology, fully expanding the boundary between media and community, encouraging more user’s participation in the creation of high-quality content and the spread of its value.

PR Chain’s goal is to achieve a core media supplier based on a decentralized media transaction platform and centered around an autonomous alliance consisting of massive vertical scene application. In addition, to build a whole new media information and win-win ecological community revolved around credible and reliable information flow and based on global media industry’s production relations and trust relationship. The entire ecosystem will include the following features:

Decentralize the platform by using blockchain technology, so that the platform is shared by all nodes, rather than monopolized by a single organization or institution. On the one hand, absolute openness, transparency, openness and autonomy will be ensured; and on the other hand, more institutions and individuals will be drawn to involve in the campaign of media information sharing and opening up.

Blockchain technology itself can be regarded as a distributed ledger, which can record all behaviors including uploading, downloading, updating and reading in a distributed manner, and cannot be tampered with, thus ensuring all media on the platform are ownership-confirmable and traceable.

To be clear, the user’s privacy and or all kinds of privacy are completely owned by the user, who will hold a private key by himself. The user is his own master to determine to whom he will authorize and how he will charge. The entire process of personal information using is recorded on the link and users can track the record any time.

The founding team of PR Chain is not only doing a great career, but also reshaping the media industry. Meanwhile, they are hoping to reward their motherland with hearts of sincerity. Mr. Zhou Haomin and Mr. Hu Weihang are both Taiwanese, and Mr. Zhou Haomin was brought up in New Zealand. But they do believe that China’s huge media market, as well as global media market, will benefit from the PR chain.

Zhou Haomin (Jeremy) is the Chairman and CEO and Chief Strategy Officer, Synereo (AMP) President and Chief Representative of Greater China. He is an entrepreneur continuously innovating and a consultant to a number of companies both home and abroad, with years of experiences in blockchain, fashion, education, film and television, cultural creativity and so on.