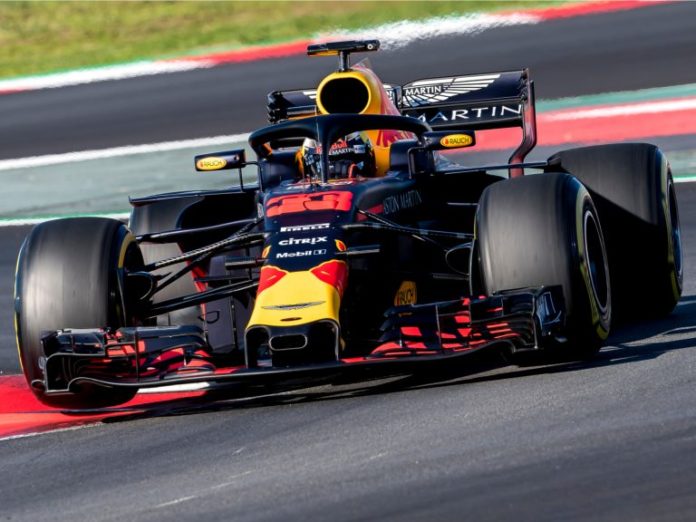 In Wednesday’s edition of The Daily we cover a number of stories that show how despite the ongoing bear market, the field continues to attract major investments and cryptocurrency companies keep on expanding their services.

Cryptocurrency venture Futurocoin has announced it’s signed a two-year deal to partner the Aston Martin Red Bull Racing Formula One (F1) team. According to the deal, the company’s branding will be featured on the RB15 F1 cars driven by Max Verstappen and Pierre Gasly, and its logo will also be seen on the drivers’ overalls and the team transporters.

“In recent years, the rise of blockchain technology and cryptocurrencies has been truly remarkable, and we’re delighted to be the first Formula One team to embrace this, through our partnership with Futurocoin,” said Aston Martin Red Bull Racing Team Principal, Christian Horner. “Secure digital currencies are on the leading edge of technological development and we are very excited to be part of this revolution.” Aston Martin Red Bull Racing won the F1 constructors’ and drivers’ world championships in four consecutive years between 2010 and 2013, and has a total of 59 total Grand Prix wins. “Cryptocurrencies and Formula One are very similar and their values are much alike; speed, technology and being ahead of their time,” said founder Roman Ziemian. “I’m a huge fan of motorsport and F1 has always intrigued me. The sponsorship is an exciting new chapter for our company and will be a global platform for us to drive awareness of Futurocoin.”

Liechtenstein-based cryptocurrency investments fund Invao has been selected as the exclusive international partner for blockchain investments by Dubai’s Seed Group, owned by The Private Office of Sheikh Saeed bin Ahmed Al Maktoum. Believed to be one of the world’s wealthiest royals, Al Maktoum is the CEO of Emirates Group, chairman of Dubai World, chairman of the Dubai Supreme Fiscal Committee, and second vice chairman of the Dubai Executive Council.

Frank Wagner, CEO of the fund, said: “This represents a seal of approval from an association of elite business minds across the UAE. At INVAO, we have the extensive experience, tact, and resources to contribute to the ascent of the UAE as a bonafide world leader in blockchain technology and look forward to helping this vision to crystallize. INVAO’s recent activity across the Middle East has shone a light on the region’s fertile ground for sustained growth and innovation.”

Coinbase has announced it is expanding support for Paypal withdrawals to all its customers in the E.U. and the European Free Trade Association countries (Iceland, Liechtenstein, Norway, and Switzerland). Before this move, SEPA and UK Faster Payments were the only options for European users to withdraw fiat funds from the platform. ”As one of the world’s easiest and most widely-used payment platforms, adding Paypal as a withdrawal option for European customers offers another great option for withdrawing their funds,” commented Coinbase’s Allen Osgood.

The company also announced adding the ability to store BTC directly in the Coinbase Wallet app. The new update with BTC support will roll out to all users on iOS and Android over the next week. The non-custodial crypto wallet already supports ETH, ETC, and a plethora of different ERC20 tokens and ERC721 collectibles. As announced previously, Coinbase is working on adding support for Bitcoin Cash (BCH) and other popular cryptocurrencies.

Facebook has reportedly hired the team behind Chainspace, a blockchain startup founded by researchers from University College London to develop a “planetary scale smart contracts platform.” Four of the five researchers behind the project’s whitepaper are joining Facebook’s blockchain division, and “people familiar with the startup” told Cheddar that Chainspace will shut down now as the social networking giant has taken over most of its developers. A Facebook spokesperson confirmed to the media site that the company had hired people from Chainspace but refused to provide further details. As we previously reported, Facebook founder Mark Zuckerberg set a goal for himself at the start of 2018 to take back power from centralized systems using “encryption and cryptocurrency.” Throughout the year his company appeared to be focused on the subject, with recruitment ads showing that Facebook was looking for data scientists and software engineers to help develop new blockchain solutions, possibly including financial services. It is now estimated that over 40 people already work in the company’s blockchain division.

Australian cryptocurrency exchange Independent Reserve has announced it will offer insurance coverage to its clients. Underwritten by Lloyd’s of London, the insurance policy insures against theft or loss of any cryptocurrency that is held in an Independent Reserve trading account. It does not, however, cover any losses resulting from market volatility or any losses arising from unauthorized access to trading accounts, such as hacking an individual account or identity fraud. In the event of an incident, clients will be compensated for any loss in their cryptocurrency holdings at the time of the incident.

“Insurance is the next logical step for our exchange in this fast-maturing industry. Our new insurance offering will bring new, meaningful and institutional capital into digital assets that was once sidelined. The Lloyd’s-underwritten policy is an addition to the multiple layers of security Independent Reserve have been using to protect digital assets for 100,000 customers over the past five years,” said CEO Adrian Przelozny. “The acceptance of this policy by the largest insurer in the world is a vote of confidence in our corporate governance, robust risk management and security protocols and a sign of their commitment to working with only the highest quality partners.”

The effect Bitcoin (BTC) and other cryptocurrencies may have on the Indian rupee is reportedly a top concern for Indian...