On July 19, TRON creator Justin Sun announced a new candidate running to be the network’s Super Representative: himself.

I am excited to run for #TRON Super Representative alongside excellent candidates, in the hands of our community. Voting is a crucial part of the #TRON ecosystem and embodies our mission of decentralization and democracy. Every vote counts! #TRX $TRX https://t.co/0R7cefF3Ws pic.twitter.com/s84NWAmQWG

Naturally, questions about whether Sun would use the 33.2 billion TRX tokens that remain in the Tron Foundation’s possession to vote for himself; Sun promised that he wouldn’t dare.

There are more than 60 candidates currently in the running to hold the Super Representative position. While Sun expressed that he “sincerely hoped” that Tron users would vote for him, he wished good luck to the other candidates and did not ask for users’ votes directly.

The Tron community gave mixed responses to this latest move. “You’re running for representative of your own company! Bold move, Cotton. God damn, best of luck!”, tweeted one follower.

“Are you so stupid of doing this? The founder will run and wants to be one of the SR?”, wrote another.
“SERIOUSLY Justin? Instead of focusing on what you can do for the TRX and let the public run the SR, you wanted to compete with us and divide your time having SR and being the Founder?”

Sun’s sudden candidacy seems to be in line with the sort of “rockstar” approach that he has taken to other aspects of his career–the “move fast and break things” attitude that Facebook CEO Mark Zuckerberg described in the past.

Who is Justin Sun?

If nothing else, Sun is certainly a trailblazer–at only 26 years old, not only is he the mastermind behind the TRON network, but he was also chosen as one of Forbes Asia’s 30 under 30 list. He has amassed more than 424,000 followers on Twitter; he’s the CEO of PEIWO, which is self-described as “the largest voice streaming app in China.”

He also spent time as the Chief Representative of Ripple in China, and was named the Global Shaper at the World Economic Forum in 2014.

Sun also acquired BitTorrent after a legal struggle that ended in mid-June of this year.

On top of that, Sun was hand-picked by Jack Ma, executive chairman of multinational internet and retail conglomerate Alibaba, as a student in Ma’s program for entrepreneurs at Hupan University. He graduated with a thesis entitled “The Birth of a Decentralized Internet”, which focused around the present, history, and future of blockchain technology. Smartereum reported that Sun is the program’s first millenial graduate.

“I feel very lucky to be a part of the Hupan University community as a young entrepreneur. Since 2014, my business and academic careers have moved forward simultaneously,” he said in a statement at his graduation. “…My startup journey is an experiment in Hupan values (improve society with moral integrity) and methodology (avert failure and take control of the future).”

But exactly what is the future that Sun envisions?

For Tron itself, the pathway seems clear. The company (which already has offices in San Francisco, Singapore, and Beijing) is seeking to establish new offices elsewhere in the world and expand its business operations in general.

Sun’s vision, however, goes a bit deeper than Tron. In fact, it seems that Sun sees Tron as the primary tool to achieve a completely decentralized web–a platform that allows users to maintain full ownership rights of the content that they create and upload.

The Dawn of Tron

Tron had the luck of being in the right place at the right time. Its ICO was held in September of 2017, catching the beginnings of the insane crypto craze that brought crypto markets past $500 billion dollars before the end of the year. The token sale closed successfully with $70 million raised.

Following its public launch, the coin skyrocketed (along with the rest of the crypto markets) from roughly $0.04 to $0.25 in a matter of weeks. The rally brought lots of positive attention; things were looking good for the new network.

Still, every popular cryptocurrency has gone through a phase of heavy criticism and general skepticism. Rumors that Cardano was being maliciously sold to vulnerable populations with unrealistic promises of high returns have plagued the network; Ripple has faced a number of criticisms in regards to how many institutions have actually adopted any of its products. Let’s not even get started with Bitcoin.

Tron is no exception. Accusations that the Tron whitepaper had been plagiarized hit the news in January of this year. “Why does your TRON whitepaper make wholesale copying of IPFS and Filecoin without a single reference?” tweeted Bedeho Mender, founder of BitTorrent client JoyStream. “Bitswap, PoRep, PoSt, these are not your ideas?”

IPFS’s Juan Benet echoed Mender’s accusation with an infographic of his own: 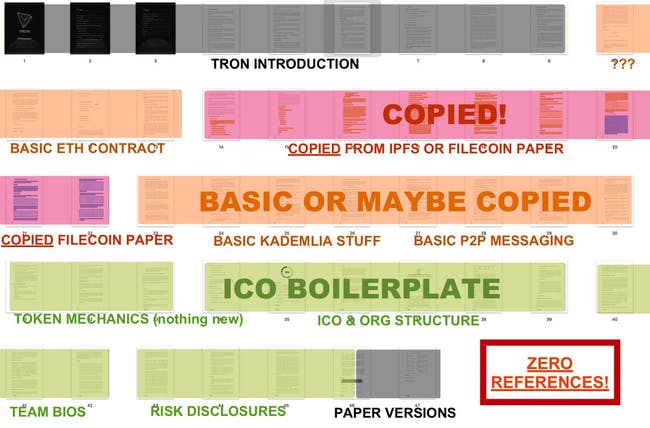 However, Sun wrote off the accusations as a result of poor translation.

Our original version of the whitepaper is in Chinese and we have a very detailed reference to the latest Chinese version. The English, Korea, Japanese and Spanish versions are translated by the volunteers. The translation missed numerous important details not just reference.

Still, FUD (fear, uncertainty, and doubt) about Tron continued to spread. In a scathing report by TrustNodes in January entitled “TRON: The $14 Billion Whitepaper With No Product,” Tron’s promises were written off with “been-there-done-that” blasé.

In response to Tron’s statement about creating a platform that would grant users “ownership of and control over the data they create” and “freely own all digital information,” TrustNodes wrote that “the proposed solution by a number of projects, and Tron appears to be no different, is the employment of various decentralized technologies, such as IPFS and blockchain tech, to create distributed data storage.”

“[Tron’s mechanism] is a nice idea,” said the report, “but its implementation in a truly decentralized manner while having the speed and convenience of centralized services is very difficult, if at all possible, to achieve at this stage.” The report accused Sun of being a “marketing wiz” with nothing but a pocket full of empty promises.

The report also questioned the likelihood that Tron’s migration from the Ethereum blockchain to its own mainnet would take place in March, as it had tentative plans to do.

TrustNodes was right about one thing, at least–migration to the Tron mainnet didn’t begin until GMT+8 of May 31, 2018. The first block was produced on the mainnet on June 25, a day that is to be known henceforth as “Tron Independence Day.”

However, the migration didn’t immediately bring the media hype and TRX price rally that many hoped it would. In fact, the price of TRX sank from $0.075 on May 27 to $0.056 on June 1. 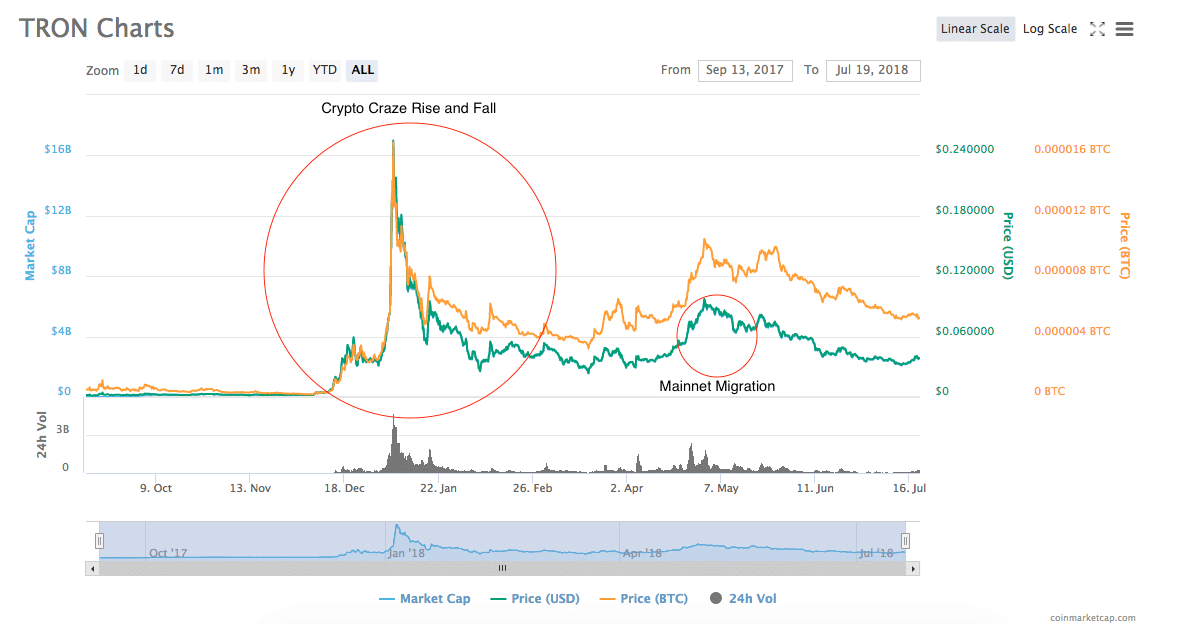 At the time, GlobalCoinReport wrote that the bearish trend around the mainnet migration was a sign that the hype around Tron was truly over: “Tron needs to actualize real results and meet the high expectation or else it will disappear from the cryptocurrency radar faster than it appeared on it. On the other hand, long-term investors are ignoring the recent shortcomings and are focusing on the long-term prospects.”

From Rags to Riches…to Rags?

However, those long-term prospects have yet to prove their worth. At press time, a single TRX token was worth
$0.038; additionally, Google search trends show that TRON has not managed to catch much attention.

However, Tron’s downward trend isn’t unique. Cryptocurrency markets have shed billions since the beginning of the year; every major cryptocurrency has lost significant value.

Despite the troubles, Tron still has some good things going for it. Justin Sun is still regarded as a rising star of the entrepreneurial world; the currency sits as the 11th-largest cryptocurrency by market cap. Tron’s reddit community boasts more than 66,000 users.

Recovery could still be in sight. Until then, the world will be watching.