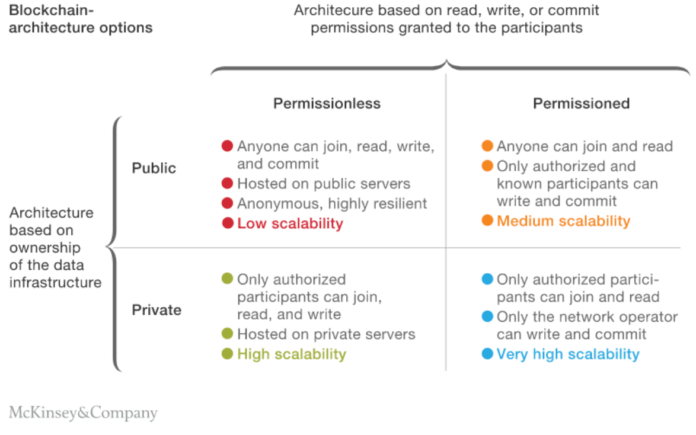 Ever since the global interest in cryptocurrencies and blockchain soared in 2017, the debate pinning public and private blockchains against one another in the context of practical adoption has persisted. Ethereum is undoubtedly the most popular public blockchain with over the majority of +2,400 Dapps being built on it since Ethereum went live in 2015, but the top Ethereum applications are still only seeing a few thousand transactions per day.

When it comes to big business (e.g. the Fortune 1000), most companies are still in the testing and piloting phase of institutionalizing blockchain in their own day-to-day business. Furthermore, deciding whether to build your own blockchain internally versus using one that is purpose-built for enterprises, such as Hyperledger Fabric or Corda, has to be thought about keeping in mind short-term and long-term viability.

Needless to say, we’re still a far cry away from where many experts thought we would be from a blockchain adoption perspective at this point, mid-2019. Scalability and speed have been a big issue for Ethereum, while the bull versus bear case wages on the currency side of things. Investors and blockchain projects alike are placing their bets on the blockchains that they think will not only sustain, but command global market share for years to come.

So what exactly is needed to onboard big enterprises on blockchain as intended by the creators of all of these protocol-layer companies? And how can we the technology still adhere to increasing regulatory scrutiny and regulatory measures?

Issues with Public and Private Blockchains

The distinct blockchain advantages of transparency, immutability, and decentralization have their trade-offs when comparing public and private blockchains, in both permissionless (open) and permissioned (closed) settings. These trade-offs have been key factors leading to adoption issues, causing many to consider hybrid options with on-chain and off-chain solutions.

At a high-level, public blockchains allow anyone to join their blockchain network to participate in transacting while making transaction data open for public, group verification in a trustless, decentralized network. However, the major issues with public blockchains have centered around transaction speed, scalability, and energy consumption.

On the other hand, private blockchains limit transactions to authorized parties in a more-controlled, centralized environment enabling a faster, more scalable network. The main trade-offs with private blockchains revolve around required trust in the authorized, controlling entities as well as the inherent issues in centralized, private control of data, including vulnerabilities related to data manipulation and hacking. With Facebook trying to launch Libra in the next 12 months while dealing with plenty of privacy issues in historically, the argument for blockchain-backed privacy is stronger than ever.

As one McKinsey report points out, “most commercial blockchain will use private, permissioned architecture to optimize network openness and scalability.” However, there are many use cases for both public and private blockchains across many areas, including voting, gaming, supply chain, and finance, which have many saying ‘one size does not fit all’ when it comes to which type of blockchain stands out as ‘best of breed’.

As the blockchain industry continues to mature, we continue to see more innovative companies coming out with solutions that tackle the issues at the foundational, protocol blockchain level.

Enter Quras, a public blockchain that uses secret, anonymous contracts. Tokyo-based Quras is working on a ‘best of both worlds’ blockchain, utilizing anonymous transactions in a smart contract to allow only the parties involved to view the transaction while the smart contract resides on a distributed and decentralized network.

Today, blockchain projects have a limited amount of protocols for them to operate on, with each searching for the right blockchain protocol that has the options required to run their ecosystem. Services that require private functionalities are not able to run on public protocols while many private blockchains use cases are limited to value transfer. A lack of dApp adoption on the biggest blockchains suggests a misalignment of incentive mechanisms between users of the blockchain and the blockchain infrastructure provider.

The most popular privacy-focused cryptocurrencies, such as Zcash, Monero, and Dash, each use their own technology, but none of them include smart contracts. While other great projects such as Origo Network, Enigma, and OasisLabs are looking to enable privacy on smart contracts, but only OasisLabs has its own protocol, with transaction traceability always being public.

The team behind Quras thought through all of the current issue plaguing blockchain protocols and adoption issues in their 2.5 years development of the Quras blockchain.

“Quras is flexible to project needs, allowing any project to build in required privacy filtering through the use of zero-knowledge proof and ring technologies to protect user transactions. Quras protects privacy for both users and enterprises, enabling many new use cases for major businesses that were hesitant in exploring blockchain for their own endeavors due to both scalability and privacy issues,” says Ken Misuma, CMO of Quras.

With a current load capability to handle up to 1,000 transactions per second along with Quras’ plans to increase capacity, the blockchain is built to scale.

First implemented by NEM, Quras uses a ‘Proof of Importance’ algorithm to reward network users, rather than coin hoarders. Those deemed ‘important’ by the algorithm can produce blocks, receiving block rewards. Quras plans on distributing all transaction fees to users who retain a certain volume of QRS, the main value transfer in the QuUras ecosystem.

The Quras mainnet is set to release in Q4 of this year, much to the anticipation of their community which includes over 100,000 brand ambassadors and developers. While Quras has been working on making some major Dapp announcements, they have put in place the ample incentives to bring developers and token managers onto the Quras protocol. Quras plans on distributing 20-40% of gas fees to projects building on its blockchain. In turn, Quras gas can be used to pay for network services, such as data storage, smart contract execution and transaction fees.

“Since we live in the age of the individual, I think we have to protect individuals and their privacy,” says Shigeki Kakutani, CEO of Quras. “For example, all Facebook data is stored on the server, but from now on I think that it should be time to personally own even (your personal) data. (It should) not sit on a server somewhere.”

The impact of a public blockchain with private, anonymous transactions is vast in protecting identity and transactions while having transparency in the process. This approach may also be key in luring big enterprises to finalize use blockchain for efficiency gains and real-world value creation without the baggage that can come with public and private blockchains.

Adopting a digital ID allows for compliance with laws and regulations, opening the door for use cases in the modern world. Regulatory compliance is essential for adoption, so innovative technologies have to be flexible enough to operate in the current frameworks and forthcoming rules of the law.

Using a digital ID makes it possible for users to control their identity in detail. This allows organizations to use distributed identifiers only when they have consent from their clients. With a higher privacy standard using anonymous technology, a safer private digital ID can be supported.

And this is exactly why blockchains such as Quras are well-positioned for big enterprise adoption. Industries that can benefit from the combination of blockchain and anonymity technologies include finance and the transactions of customer assets, government and the handling of electronic voting and smart city infrastructure, insurance, and the personal and asset data for insurance coverage, as well as healthcare, supply chain, gaming, and retail.

Let’s look at the +$7 trillion healthcare industry for example, which is very fragmented, burdened with poor consumer service and a lack of transparency around price, quality, and safety of products and services. Today, medical data cannot be easily shared between health practices, let alone country lines, due to various regulations and an inability to anonymous consumer data. With privacy being implemented at the level of transaction initiation and contract interaction, mass medical data harvesting can be conducted securely and ethically.

The Future is Bright

The convergence of traditional industry and blockchain is inevitable, but it will have to be done in a compliant way that does not sacrifice the stability, privacy or protections that the free enterprise world has today.

Luckily, many exciting companies are seeing to it that the convergence will have sooner versus later, and we can finally enter into the ‘web 3.0’ era for good.

Quras is aiming to be the blockchain built for collaboration and mass adoption, developing for the future with a strong sense of sensibility when it comes to what is needed today.

Editor’s Note: Thank you to Simon Bogdanowicz and the Quras team for help with this article.

The post The World’s First Public Blockchain with Secret Contracts is Making its Case appeared first on CoinCentral.