Also on August 1, Bitcoin Magazine’s Aaron Van Wirdum released an extensive guide for bitcoin holders on claiming and selling Bitcoin Cash that has been credited to them. Essentially, the process involves private keys of bitcoin wallets that are held by users on non-custodial platforms. For users that have full control over their private keys, there is a manual process to undergo when attempting to retrieve Bitcoin Cash (BCH).

Centralized bitcoin exchanges and trading platforms hold private keys for their users and thus, through exchanges, the process of claiming Bitcoin Cash is much simpler.

Two out of Five Major Bitcoin Exchanges in the U.S. Support Bitcoin Cash

The U.S. is the world’s second largest bitcoin exchange market with a daily trading volume of $97 million with China taking the top spot. Only two of the top five bitcoin exchanges and trading platforms in the U.S., however, are supporting Bitcoin Cash crediting and withdrawals. Bitfinex and Kraken announced on July 27, 2017, that all accounts will be credited with BCH in the near future while Bitstamp, Gemini and GDAX have no plans on supporting BCH anytime soon.

At 6:35 PM GMT on August 1, Kraken announced that all of its accounts have been successfully credited with BCH. Around the same time, Bitfinex stated that its development team is also in the process of crediting BCH to all accounts but that no account had been credited yet.

In contrast, Bitstamp, Gemini and GDAX explicitly stated that the three exchanges will not support BCH. Both GDAX and Bitstamp addressed the issue by describing BCH as an alternative cryptocurrency (altcoin) and that they are not in a position to support the digital currency.

“It is important to clarify that Bitstamp would not be in a position to support Bitcoin Cash [BCH], the coin associated with the Bitcoin Cash proposal. In Bitstamp’s view, [BCH] is an alt-coin and the decision to list BCC tokens remains at our sole discretion at all times,” said the Bitstamp team.

In an interview with bitcoin analyst Tone Vays, Jimmy Song, principal architect at Paxos, suggested  that, in terms of security, it is not safe to immediately withdraw or credit BCH right after the fork.

Hence, it is still possible that exchanges like GDAX, Gemini and Bitstamp could decide to credit accounts with BCH in the future, rather than rushing into the development of a specific system to enable BCH withdrawals immediately after the fork.

Earlier this week, local Chinese cryptocurrency news agency CnLedger offered a chart demonstrating the decision of all Chinese bitcoin exchanges in regard to crediting and supporting Bitcoin Cash. All bitcoin exchanges in China will allocate BCH to users; in fact, the three largest bitcoin exchanges in the country, including OKCoin, Huobi and BTCChina, have already announced that they will list the BCH/BTC trading pair on their trading platforms. 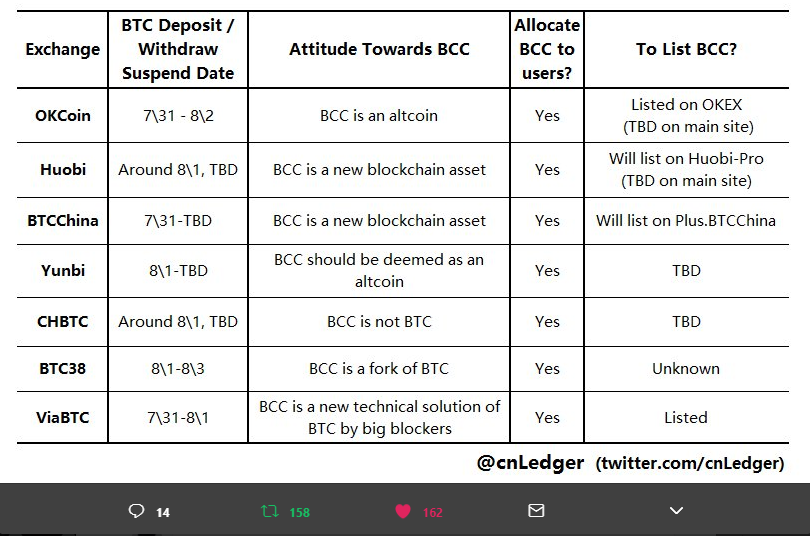 More importantly, South Korean bitcoin exchanges will credit their clients and all accounts with Bitcoin Cash at a 1:1 ratio based on the balance of bitcoin holders during the time of the fork.

“In the event that Bitcoin Cash gains traction, we may enable Bitcoin Cash trading within a few days after the UAHF, if and when we deem it safe to do so. If we do, we plan to allocate to our users Bitcoin Cash at a 1:1 ratio with Bitcoin, based on users’ Bitcoin balance at the time of the UAHF (~August 1st at 9:20pm KST),” said the Korbit team on July 26, 2017.

In the upcoming months, as leading bitcoin exchanges in the Chinese and South Korean bitcoin exchange markets add support for BCH trading, interest in BCH will likely be concentrated in Asian markets.

A full list of bitcoin exchanges and bitcoin wallets that have announced plans to support Bitcoin Cash that were not mentioned above can be seen below:

Got any more to add to the list? Let us know here.