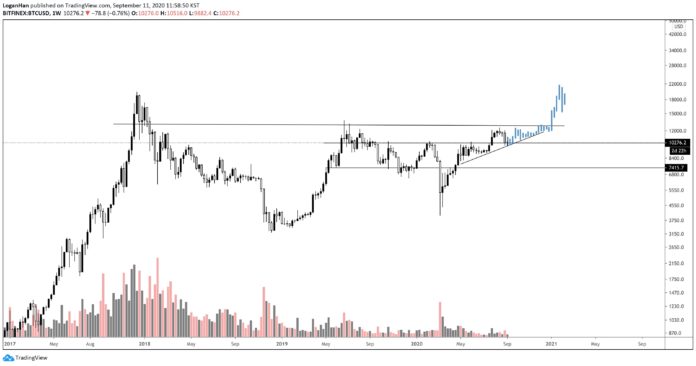 The top trader shared the chart below on September 10th with the caption, “my thoughts on how Bitcoin will play out in the coming weeks.”

The chart indicates that BTC’s bearish retracement has already bottomed as the coin holds a pivotal uptrend that originated in April/May. The chart also indicates that after consolidating between $10,000 for $12,000 for the coming months, Bitcoin will begin a rally towards $20,000 by the end of the year or start of 2021.

This is in line with what happened at the start of the previous macro bull market in 2015-2016. After surging, Bitcoin consolidated in a pivotal trading range, then began a parabolic ascent months later.

Logan Han is a prominent crypto trader that regularly posts profitable trades on his Twitter feed. Han has garnered over 4,000 followers after sharing a number of his tweets and ideas about the state of the global economy and crypto markets.

He isn’t the only analyst eyeing a move towards $20,000 in the near future.

“Bitcoin is mirroring the 2016 return to its previous peak. Fast forward four years and the second year after the almost 75% decline in 2018, Bitcoin will approach the record high of about $20,000 this year, in our view, if it follows 2016’s trend.”

Others that think Bitcoin will reach its previous all-time high, then potentially establish a new one in the next three or four months include Arthur Hayes of BitMEX, Dan Morehead of Pantera, and Raoul Pal.