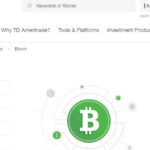 The largest brokage— TD Ameritrade in the United States has reportedly rolled out Bitcoin futures trading on its platform.

The news of the rollout was first shared by eToro senior analyst, Mati Greenspan and confirmed by TD Ameritrade’s official website.

Earlier this year, the brokage executive vice president, Steven Quirk stated that calls have been coming in from their too clients asking them to provide them with an instrument that ties futures to crypto.

Then, Steven revealed made it known that the brokage is likely going to follow through and take part in the booming crypto market.

Reportedly, the equity value of TD Ameritrade stands at over $1.2 trillion equity. With BTC officially added to the list of instrument available for trading a lot of people will be attracted to space.

Confirming the news on its website, the brokage adds that:

Bitcoin futures trading is available at TD Ameritrade. Quotes and trading capabilities for these futures products are available on our thinkorswim platform and TD Ameritrade Mobile Trader app.

As for now, clients of TD Ameritrade can access to futures contract tied to bitcoin by following the procedure explained on its website.

Previously, it was revealed that TD Ameritrade-backed ErisX received a license from US Commodity Futures Trading Commission (CFTC) to offer crypto derivatives. The report made it known that “the license —Derivatives clearing organization (DCO) is one of the parallel approval to the existing designated contract market (DCM) license that ErisX had already held.”

This new of TD Ameritrade rolling out Bitcoin futures contracts is coming right after Bakkt announced the beta testing launch of bitcoin futures.
Bakkt confirmed the testing via a recent tweet which reads:

“Today kicks off user acceptance testing @ICE_Markets for the Bakkt Bitcoin Daily & Monthly Futures contracts Testing is proceeding as planned with participants from around the world.”