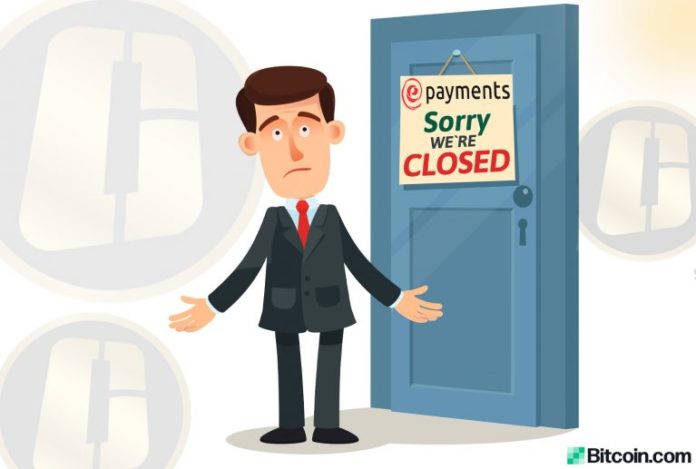 Epayments, one of the largest payment providers in the U.K., has halted operations after the Financial Conduct Authority (FCA) suspended the company for “weaknesses” related to its anti-money-laundering (AML) process. Since Epayments shut down on February 11, customers have been complaining because they cannot access their money. Reports also detail that if the firm becomes insolvent, Epayments clients won’t be protected by any type of FCA-regulated insurance fund. Additionally, a non-executive director who resigned last week was once the head of cards and payments at Locke Lord, a law firm that represented Onecoin’s ‘cryptoqueen’ Ruja Ignatova.

Epayments was a very popular payment processor based in the U.K. and estimates say the firm held £127.5 million of customer funds. However, the company suspended operations due to an FCA mandate that said the firm had “a number of weaknesses” tethered to its AML system. The suspension has neutered Epayments’ ability to facilitate payments and customers cannot use their prepaid cards or withdraw and transfer funds.

The FCA-regulated company claimed it had over a million registered clients and handled more than 1,000 business accounts as well. The Epayments website displays a notice that explains why it suspended operations and notes that the FCA said while they investigated Epayments AML system controls, they “identified a weakness that required remediation.” The Epayments notice also states:

We know this will be a very frustrating time for our customers. We apologize for any inconvenience caused and are working tirelessly to ensure improvements are made and accounts can be reactivated as soon as possible.

So far customer accounts have not been reactivated and the subject is trending throughout social media, forums, and Telegram support channels. Customers are upset they cannot access their money and no one truly knows how much is being held back by the FCA suspension. Financial news outlet FT claims to have spoken with a slew of unhappy Epayments customers who cannot use their own money.

An adult entertainer from Brazil said she had $400 locked in her Epayments account and a man from Turkey told the publication he has $54,000 stuck inside the Epayments platform. FT highlights that a number of online adult entertainers leveraged Epayments services and their income has been affected by the outage. Other news outlets, including Behindmlm.com, have underlined the fact that the lion’s share of Epayments customers worked in either the adult industry or multi-level-marketing (MLM) affiliate schemes.

Is the Epayments Suspension Connected to the Onecoin Fallout?

In addition to the suspension, a non-executive director from Epayments, Robert Courtneidge, abruptly resigned on February 17. Courtneidge would not comment on why he left the company but reports show that he was formally employed by Locke Lord. The law firm is well known for doing business with Onecoin’s ‘cryptoqueen’ Ruja Ignatova and another employee Mark Scott.

The former Locke Lord attorney Scott was indicted for money laundering charges and accused of laundering $400 million for Onecoin leaders. Scott, a Florida resident, is fighting the case but he faces up to 50 years in prison for the alleged crime. Just before he started working with Epayments, Courtneidge worked for Locke Lord and was the Global Head of Cards and Payments until 2018.

Reports detail that at Locke Lord, Courtneidge was considered a “crypto expert” and he hasn’t been charged with any crimes associated with Onecoin. However, FT and Inner City Press reveals that U.S. attorney Christopher DiMase brought up Courtneidge’s name quite a bit during Scott’s trial. DiMase told the court that emails between Courtneidge, Scott, and Ruja Ignatova show that he “understood that Onecoin, effectively, was a fraud scheme.” One specific email shared by Inner City Press was sent to Courtneidge and Scott’s email showing the cryptoqueen asking them to store £220K in London for her. Ignatova also disappeared shortly after and she’s been missing for well over a year. FT asked Courtneidge about the emails and his spokeswoman said:

Mr. Scott was relying on a generally available paper Mr. Courtneidge had written on cryptocurrency regulation around the world that was available on the Locke Lord Website and not on any conversations had via email with Mr. Courtneidge.

FT stated that Courtneidge’s spokeswoman would not comment on his resignation or any subject matter pertaining to Onecoin. No one knows when the Epayments service will start operating again or if Courtneidge’s resignation has anything to do with the AML weaknesses. Despite all the speculation in regards to the Onecoin drama, a great number of people cannot access funds held on the Epayments platform and over £100 million in client funds might be held hostage. The story highlights the fact that centralized payment providers are sketchy and can be extremely risky. The tale also shines a light on why permissionless money held in a noncustodial fashion is the future of money.