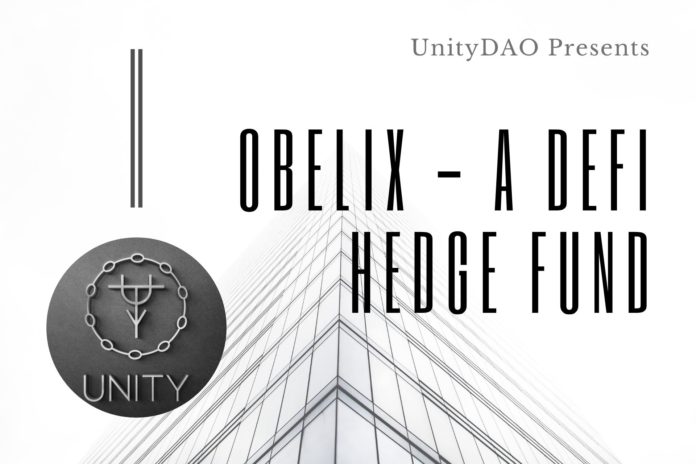 Decentralized Finance (DeFi) applications are making massive inroads in the financial world by offering some interesting use-cases catering to the future goals of the financial market.

With the growing trend of decentralized hedge funds, UnityDAO has arrived with an interesting value proposition with its own DeFi hedge Fund, Obelix, named after the popular French comic series ‘Asterix the Gaul’.

UnityDAO’s decentralized hedge fund will have its native crypto token OBELIX and will leverage the platform’s double-layered DAO model.

The UnityDAO Model – The Senate and Council

In the blockchain industry, DAO or Decentralized Anonymous Organization resembles a community-driven platform instead of a single person controlling everything. In most of the centralized systems, we have often found authorities bending the rules by consolidating power. The UnityDAO is one such project that aims at solving the issue with unequal distribution of power.

UnityDAO employs a double-layered DAO solution allowing all community members to voice their concerns and raise proposals. It aims at building a self-sustaining and decentralized community that has the power to take decisions on future developments and directions.

The UnityDAO consists of the Senate and the Council. The Senate represents the out layer where each member can raise the proposal with each proposal having equal consideration. To join the UnityDAO Senate, members need to deposit a minimum of 10 UTY. However, the membership guarantees participation in all future projects of UnityDAO.

The Council, on the other hand, represents the inner layer with a higher authority. The council can either adopt or reject proposals presented by the Senate members. A minimum deposit of 55.5 UTY is needed to join the UnityDAO council. Decision within the council are pushed through a majority vote and amended further.

Looking at the incredible potential with its double-layered DAO model, the UnityDAO team decided to arrive with the Obelix hedge fund. The hedge fund will pay out real profits to the Senate, Council, and all the stakers of the OBELIX tokens.

Instead of all the community members giving their opinion individually, the UnityDAO has decided the Council will make important decisions related to the funds’ movement. UnityDAO has major trust over its council members who have helped in the platform’s progress so far. Besides, none of the council members have left their seats showing great dedication and sincerity towards the project.

UnityDAO argues that its team of Council has been working in the best interests of its community members. Thus it notes that financial decisions involving Obelix cannot be left to public decision making. UnityDAO also notes some of the potential downsides of public decisions. These are:

But Why Obelix? The OBELIX Tokenomics

The name Obelix draws inspiration from the popular French comic character. UnityDAO talks about the magic potion I.e. the OBELIX tokens staking which will help to fuel the overall OBELIX ecosystem.

The Council members will suggest different investment opportunities and discuss within the Council circle. The profits derived from the Obelix hedge fund shall be distributed to OEBLIX stakers, the Senate, and the Council. Apart from OBELIX, the sharing of profits will also benefit UnityDAO native token UTY.

The Obelix DeFi Hedge Fund will function completely on-chain and UnityDAO has assured that it will be 100% traceable as well as transparent to avoid any fraud transactions.

The initial distribution for OBELIX tokens will happen through an exclusive pre-sale as part of raising liquidity. The Council seat will get a guarantee allocation while the Senate members will also be rewarded for their contribution to Obelix.

The Obelix tokenomics as well as fund distribution.

UnityDAO has ensured that all those contributing towards the liquidity farming of OBELIX tokens will get rewarded in OBELIX. The Obelix fund will have a dedicated dashboard for liquidity farming to track all the movement from the current and past investments.

UnityDAO is also coming with its mobile app and offers a seamless user-interface for staking OBELIX as well as for offering liquidity. The mobile app will have all tracking information for OBELIX. It will also have info regarding the value in the liquidity pools, the Senate and Council seats, the value locked in the seats, and the annual percentage return (APR) at any given time. Obelix is a one-of-its-kind DeFi hedge fund that offers investors the opportunity to participate in investing in the DeFi space and reap rewards. It has a unique Senate/Council structure in place that ensures the best interest of the community.