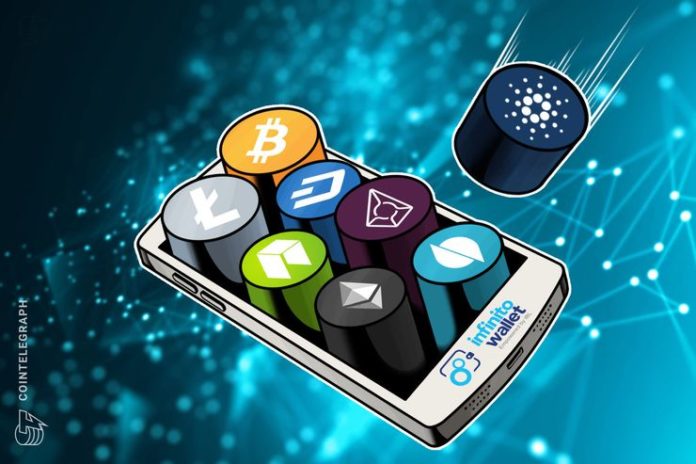 The company behind a multi-asset, universal wallet that can store major crypto and smart contract tokens in one place says it has become the first mobile wallet to support the ADA cryptocurrency.

Infinito Wallet says the milestone coincides with an update to version 1.15.0 of its platform – enabling users to “securely send, receive and check transaction history of ADA.”

According to the company, this development is significant because very few wallets on the market support ADA, and there is no such app for mobile devices. Infinito developers have worked with the development team behind Cardano and IOHK, and they utilized their official Cardano Rust project to seamlessly integrate ADA-support into the Infinito Wallet. With IOHK’s permission and support, Infinito has contributed code to the open-source Cardano Rust project for ADA mobile wallet integration and will continue such support for the Cardano open-source community.

Although there is a desktop wallet exclusive to ADA called Daedalus, Infinito Wallet says people who hold this cryptocurrency deserve a mobile-driven, “ultra-lightweight and portable” alternative, which would maintain the utmost stability and security. Furthermore, on its roadmap, the Universal Wallet plans to support unique features of the Cardano blockchain, including staking Ouroboros.

ADA now joins thousands of other tokens on the biggest smart contract platforms — such as ETH, EOS, NEO — together with leading coins, including Bitcoin, Bitcoin Cash, Litecoin, Dash, ETC and Dogecoin, supported by Infinito Wallet.

Infinito Wallet describes the ADA cryptocurrency, which is based on the third-generation Cardano blockchain, as “digital cash that represents the future of money.” It is hoped the technology will pave the way for fast, direct and secure transfers — and in time, Cardano plans to “tackle numerous problems facing the crypto industry” through a smart contract platform for the financial applications that consumers, businesses and governments can rely on.

The company says it has gone through a third-party security audit, and now users have full access to their private keys. Through the Infinito Wallet app, which is available on Apple’s App Store for iOS devices and Google Play for Android smartphones and tablets, users can check their ADA balance through the dashboard, send the cryptocurrency to any address and review their transaction history. It is also possible to receive ADA by sharing a public address or through a unique QR code that has been integrated into the app.

The company says it plans to launch version 2.0 of its universal wallet in the fourth quarter of this year, and this will be equipped with a new design that offers a higher degree of customization and an enhanced experience for Infinito Wallet’s user base. Other features are going to include “full support” for blockchain mainnets, including Ontology and more.

The universal wallet is available in a plethora of languages — including English, Chinese, Japanese, Vietnamese, Korean and Russian — and announcements through its official Telegram groups are also available in four languages.

In a nod to its mobile-driven approach, Infinito Wallet supports Touch ID to provide “easy and fast app access without sacrificing security.” Additionally, its apps allow users to store a list of the addresses that they send and receive money from the most, with a view to pave the way for “hassle-free transactions.”

Unlike other wallets, the company says it allows users to include messages with their transactions — making it easier to maintain their records. This is coupled with an ability to export an account’s entire transaction history via .csv files and emails.

In the future, users will be able to see the fiat value of their portfolio and how it has changed over the past 24 hours, in real time.

Infinito Wallet launched toward the end of 2017 — it has been downloaded by more than 250,000 users and has received positive reviews by the community. The brand is the brainchild of Infinity Blockchain Labs Europe, which hopes that its universal wallet will “serve as a gateway for users to maximize usage and potential of their cryptocurrencies.”