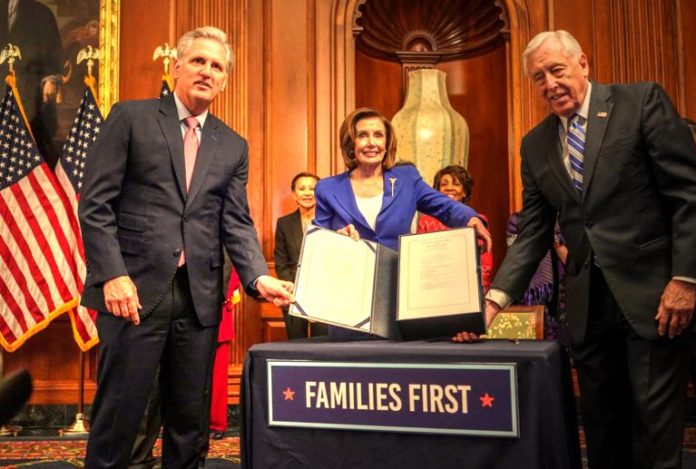 On Friday, U.S. bureaucrats passed the 2020 stimulus bill, which has become the largest cash injection package ever created by the federal government. However, following the bill making it through the Senate and House, Republican representative Thomas Massie told the public the stimulus bill bolsters a shroud of secrecy surrounding the Federal Reserve. Moreover, within the depths of the bill’s 880 pages, there’s a $454 billion slush fund available for Wall Street among many other types of pork-barrel funding.

Also read: Trump Signs Largest Relief Bill in US History: When Will Americans Get Stimulus Checks

While Americans wait for their $1,200 checks for economic support from the U.S. federal government, American politicians have once again shown an enormous amount of greed and manipulation. While polarizing Democrats claim to be for the average citizen and main street, bureaucrats like Bernie Sanders, Sherrod Brown, Alexandria Ocasio-Cortez (AOC), Jeff Merkley, and Elizabeth Warren just gave the U.S. central bank and Wall Street unlimited powers. A great majority of bi-partisan leaders approved the new bill that lets the Federal Reserve create Special Purpose Vehicles (SPVs) for risky schemes (similar to Enron) and a $484 billion slush fund for U.S.-based financial incumbents. Although, one representative from Kentucky told the press after the stimulus bill passed that the whole “Coronavirus Aid, Relief & Economic Security Act” (CARES Act) passing was a blatant “cover up.”

.@RepThomasMassie: “There’s a big cover up in there.”

Representative Thomas Massie told reporters that U.S. representatives and senators tried to cover up the voting process during the bill’s passing. Massie said that unnamed politicians are trying to protect themselves from future “political ramifications.” “The truth,” Massie said. “If you are willing to report it is that [representatives] don’t want a recorded vote. They don’t want to be on record for making the biggest mistake in history.” The Kentucky lawmaker also took to Twitter and told the public that he “swore an oath to uphold the constitution, and I take that oath seriously.” According to Massie, the CARES Act’s official vote had a number of discrepancies and it should not have passed. Massie noted that democratic House speaker Nancy Pelosi also got to add $25 million to fund the Kennedy Center and for the National Endowment for the Humanities and Arts. Massie believes this money could’ve been spent on current healthcare costs like covid-19 test kits and medical equipment. Not only did American leaders ‘pork’ the bill with unneeded funding, Massie also highlighted that the CARES Act takes good care of the Fed. Massie tweeted:

This bill creates even more secrecy around a Federal Reserve that still refuses to be audited. It allows the Federal Reserve to make decisions about who gets what, how much money we’ll print. With no transparency.

Unnecessary Spending, Pork Barrel Funding, and Secret Monetary Policy Americans May Never Learn About Unless They Read the Bill

In addition to the vote discrepancies, the CARES Act’s pages indicate that Massie’s arguments are correct. The act contains massive amounts of money that go toward unnecessary spending and the section that gives $1,200 to taxpayers, is the smallest section within the entire bill. The bill shows that the CARES Act allows a special central bank fund for $484 billion that “shall be available to make loans and loan guarantees.” There is zero oversight for this new slush fund and it provides the Fed with the ability to facilitate investments for the purpose of “providing liquidity to the financial system” under a shroud of secrecy. Columnists Pam Martens and Russ Martens disclosed that the bill allows the Fed to fund Wall Street in secret and create Special Purpose Vehicles (SPVs). SPVs are entities built to curb extremely risky investments (like buying Bear Stearns stocks in 2007) and White House Economic Adviser Larry Kudlow noted that SPVs will add “$4 trillion in Federal Reserve lending power.”

Essentially, with taxpayers’ funds, the Fed can use the SPV to take a 10% stake in a number of Wall Street bailouts. Martens’ report highlights the central bank can “simply keep these dark pools off its balance sheet while levering them up 10-fold.” The researchers report also adds:

This could mean that the American taxpayer may never learn why it went into debt to the tune of $454 billion if no records are being maintained.

Unfortunately, news publications like the Wall Street Journal, CNN, New York Times and Bloomberg are not reporting on the secrecy that has been tacked onto the CARES Act. They have reported on the $1,200 checks to appease the angry citizenry, but have failed to report on the mysterious ‘pork funds’ slipped into the stimulus bill. The Fed already created an SPV called the Commercial Paper Funding Facility (CPFF) and this move provides the Fed with the ability to provide $10 billion of credit protection to banks.

If Americans actually read the CARES Act, they would notice that there’s $25 million set aside for the capitol building’s cleaning supplies, $25 million extra for the House of Representative’s salaries, and $315 million for diplomatic programs as well. There’s $1 billion being kept for the airlines’ recycling program, $9 million for “miscellaneous Senate expenses,” $25 million goes to the FAA, the Inspector General Office gets $5 million for salaries, $1 billion will be used for the free phone program, and $30 million will be fed to OSHA for increased regulations.

Representative Thomas Massie was not lying when he said the vote on Friday was unjust and mysterious. There’s a lot of hidden treasures in the CARES Act for the Fed, Wall Street, and the precious salaries for the American bureaucracy. The Martens stress that the CARES Act strengthens the powers of the central bank and Wall Street incumbents and “ together they are an unparalleled and unprecedented threat” to the nation. Politicians are acting like heroes with this $1,200 check program, but in reality “the public deserves an honest explanation from each of them,” Martens’ report concludes.

What do you think about the Cares Act’s secret funds for Wall Street and pork-barrel funding? Let us know in the comments below.

A number of signals continue to tie Bitcoin to the present global economic crisis. Although the flagship cryptocurrency has shown...