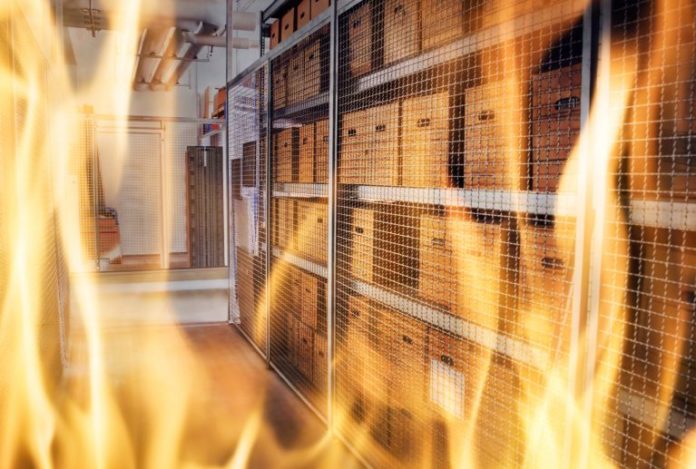 During the early morning hours of September 30, a nine-minute video circulated on Twitter showing a large bitcoin mining farm burning down. Sources say the mining farm belonged to the company Innosilicon and roughly $10 million worth of mining rigs were destroyed.

$10 Million Dollars of Miners Up in Smoke

On Monday, cryptocurrency advocates shared a video on Twitter which shows a large fire destroying a warehouse filled with bitcoin mining rigs. The first video was shared at 10 a.m. by early bitcoin miner Marshall Long who tweeted: “[This] big datacenter from Innosilicon just went nuclear — Dovey Wan did you see this?” A few hours later, the founding partner at crypto asset holding company Primitive Ventures, Dovey Wan, also shared a longer video of the fire in China. Wan stated: As [Marshall Long] already broke it, here is the real footage of a local mega farm caught on fire — Which claimed a loss of $10M worth of mining machines.”

Details about the mega-mining farm remain sparse, but news.Bitcoin.com’s sources say that the $10 million dollar mining facility did in fact burn down due to “faulty wiring and bad PSUs.” Our source, who asked to remain unnamed, said that the facility was located in Inner Mongolia. Innosilicon’s headquarters is located in Wuhan, a commercial center adjacent to the Yangtze and Han rivers. A few people did reach out to Innosilicon on Twitter, but the company has not made any official comments at the time of publication.

As @OGBTC already broke it, here is the real footage of a local mega farm caught on fire…

Which claimed a lost of $10M worth of mining machines pic.twitter.com/bMihmIwTNO

The last major fire reported at a bitcoin mega farm was in 2014 when a warehouse-style facility in Thailand lost millions of dollars’ worth of Spondoolies Tech miners. At the time, a Spondoolies Tech representative blamed the fire on mismanaged electrical and network cabling.”[The] buildup was definitely not according to U.S. electric code,” the representative said. The speculative fire discussions on September 30 were quickly tied to a hashrate anomaly that took place at roughly the same time. BTC’s hashrate did drop and a few people reported an unusual mining occurrence with BTC block 597,273.

“Block 597,273 was mined 119 minutes after its parent,” explained Antoine Le Calvez on Twitter. “This happened only 10 times in Bitcoin’s history, the last time in May of 2014.” Le Calvez continued:

Assuming blocks come in 10 minutes on average, this interblock time has a 0.000679% chance of occurring. Since yesterday’s reported fire and the drop in hashrate, the price of BTC has started to rise again. The hashrate did see a low of 72 exahash per second (EH/s) on Monday but has since jumped back to 91EH/s on Tuesday morning. The videos of the fire shared on Twitter were followed by an Innosilicon announcement that detailed the firm would have to delay its Grin G32 mining rig shipments “due to a shortage at the foundry.”

@Inno_Miner Is your datacenter on fire right now?

Innosilicon’s notice says that customers willing to wait the extra length of time will receive a $75 coupon. The announcement on Twitter prompted a few speculators to ask the company if the reported fire in China had anything to do with the shipment delay.

Fighting a Losing Battle: Federal Reserve Prints Another $63.5B This Week

The repo rate made the headlines again at the end of September. The overnight general collateral repo rate jumped about...