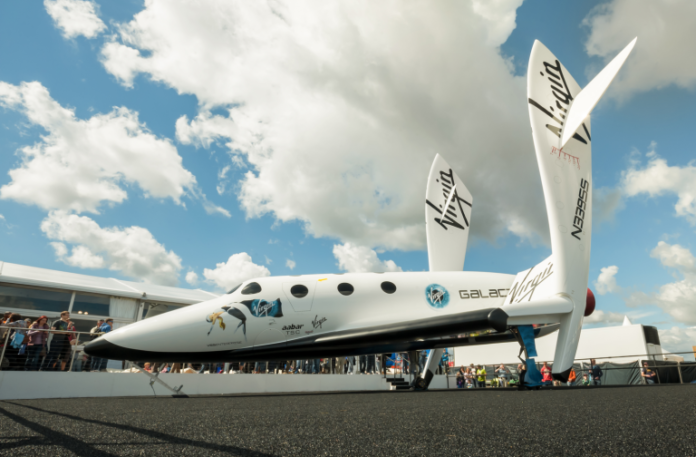 Virgin Galactic is one of the leading ventures in the emerging private space race alongside companies such as Spacex. However, it is being compared now mostly to another Elon Musk creation – Tesla. This is because Virgin Galactic stock is skyrocketing as traders rush in to bet on the futuristic promise of space tourism. Its founder, the famous entrepreneur Richard Branson, announced that the company already accepted bitcoin for space flight tickets back in 2013.

Virgin Galactic, the space arm of Richard Branson’s empire, has been on a crazy rally recently. The company’s stock (NYSE: SPCE) jumped over 23% on Wednesday, closing at a new record high price of $37.35 after its best day of trading ever. In total, the Virgin Galactic stock has increased in value by a whopping 298% over the last three months.

The forces that are considered to be driving this amazing rally are a new fascination by retail investors and a rush of speculative options traders on the Virgin Galactic stock. These two groups have sent trading volumes soaring and the price followed, eliciting comparisons to the Tesla stock rally that was fueled by similar forces.

The Virgin Galactic stock was priced at just $11.75 after it started trading on the New York Stock Exchange on October 28, 2019, making it the first ever publicly listed human spaceflight company. In November it released its financial results for its third quarter of fiscal year 2019, showing it had net proceeds of over $430 million, which Virgin Galactic intends to use to fund its operations. The company also reported it received customer reservations from more than 600 people in 60 countries, representing approximately $80 million in total collected deposits, and over $120 million of potential revenue.

Will Take Bitcoin to Shoot You Into Space

Virgin Galactic is in a very futuristic line of business, so it makes sense it would adopt cryptocurrency to give it an image as such. And most of the people who have joined the scene early and made a fortune from crypto are tech-minded people, the perfect fit for the company’s would-be-astronaut clients. This is probably why the company’s founder announced years ago that they already had a client that paid with bitcoin.

On November 22, 2013, Branson stated that: “Bitcoin, the virtual currency, has really captured the imagination recently as one of the world’s most innovative businesses looking to the future. So we think it is about time Virgin Galactic customers can choose to pay with bitcoins. One future astronaut, a female flight attendant from Hawaii, has already purchased her Virgin Galactic ticket using bitcoins, and we expect many more to follow in her footsteps. All of our future astronauts are pioneers in their own right, and this is one more way to be forward-thinking.”

The famous serial entrepreneur also added that: “I have invested in some bitcoins myself, and find it fascinating how a whole new global currency has been created. For people who can afford to invest a little in bitcoins, it’s worth looking into.” Since 2013 Branson has expanded his interests and reach within the cryptocurrency world, among other things hosting an annual Blockchain Summit for industry luminaries on his private island.

Other space ventures have also adopted cryptocurrencies for payments in recent years. For example, in December 2018 we reported on Orion Span, a project that has plans to launch a space station that will be used as a luxury hotel, where a 12-night stay on the craft will set you back $9.5 million. The project accepts a few cryptocurrencies including bitcoin cash (BCH) and BTC. Also, the founder of the rocket company Spacex, Elon Musk, is fascinated with Bitcoin so you might be able to pay for a trip to Mars with crypto one day. Finally, if you can’t afford any of these options, at least your crypto knowledge could someday get you a job with NASA.

What do you think about Virgin Galactic and its connection to the cryptocurrency world? Share your thoughts in the comments section below.

The post Virgin Galactic Stock Is Skyrocketing, Will Take Bitcoin to Shoot You Into Space appeared first on Bitcoin News.