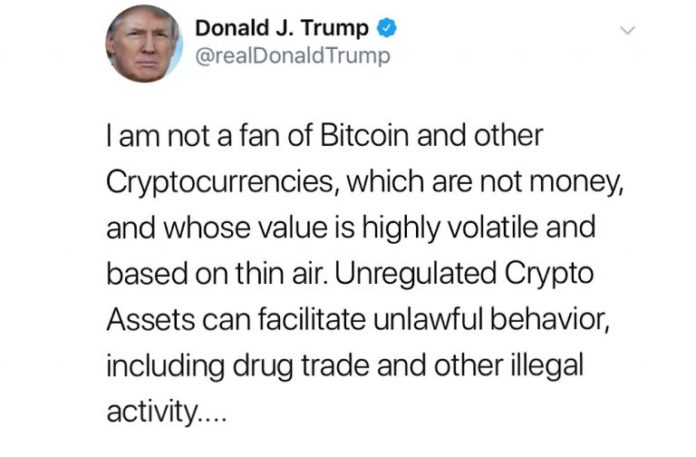 Donald Trump has taken to Twitter yet again, and this time he’s talking about bitcoin and the superiority of the United States dollar. Bashing lack of regulation and potential for criminal activity inherent to crypto, Trump claims the U.S. fiat will always be the strongest currency in the world. As empirical evidence goes, however, it’s USD that’s really in need of moral and economic scrutiny.

On July 11, U.S. President Donald Trump went into full rant mode on Twitter, taking swipes at Bitcoin, Libra and cryptocurrencies in general, claiming they are “not money” and “based on thin air.” In addition to supplying the internet with a shining gem of mathematical, economic, and historical ineptitude, the president took things one step further, claiming that:

Of course, he’s right. Unregulated crypto assets really can facilitate bad things. What makes his three-part proclamation so problematic, though, is that he closes it out by praising the strength and dominance of the U.S. dollar in pulsating, Orwellian tone:

“It is by far the most dominant currency anywhere in the World, and it will always stay that way. It is called the United States Dollar!”

But when we examine the actual nature of the USD versus bitcoin and cryptocurrencies, all the blustery rhetoric seems to lose its force, and the picture that remains is one of striking—if not tragic—clarity.

What Does the US Dollar Finance?

Yes, crypto finances bad things and good things. Yes, fiat does the same. The almighty U.S. dollar is used to buy bread, iPhones, and throw birthday parties. It is also used to dismember infants in foreign lands, blasting them to bloody pieces with bombs, traffic illegal drugs, kidnap all manner of non-violent individuals, and keep billions impoverished, enslaved, and fearful. A butterknife can butter bread. A butterknife can kill someone. What is Trump’s argument, then? If the implicit claim is that bitcoin and crypto are more dangerous than the dollar empirically, then history, mathematics, and the science of economics can set the record straight here. The United States has been at war for 226 years of its 243-year existence. Perpetual warfare remains the reality today. A testament to this is the story of Cpl. Joseph Maciel, killed at age 20 in Afghanistan, who was only three years old when the conflict was set in motion in 2001. As sad as this is, it’s anecdotal, admittedly. But the numbers ultimately tell the same tragic story as Joseph’s.

Since 2001, wars in Iraq, Afghanistan, and Pakistan, have cost at least half a million human lives, and over half of these deaths have been non-combatants—civilians. Of course this does not take into account drone bombings and battle in Yemen, Syria, Somalia, Libya, and elsewhere. These numbers also do not account for indirect deaths. According to a study by the Co-Director of the Costs of War Project at Brown University, Neta C. Crawford:

Because of limits in reporting, the numbers of people killed in the United States
post-9/11 wars, tallied in this chart, are an undercount … In addition, this tally does not include “indirect deaths.” Indirect harm occurs when
wars’ destruction leads to long term, “indirect,” consequences for people’s health in war
zones, for example because of loss of access to food, water, health facilities, electricity or
other infrastructure.

The Cost of War in US Dollars

As of November 2018, U.S. taxpayers have been forced to pay $5.9T to support war in the Middle East and Asia since 2001. The inflation-adjusted cost of military conflict since World War I is estimated by the Congressional Research Service to be over $5.6T. With numbers this astronomical, and a war machine that continues to grow cancerously, it is difficult to get a feel for the sheer amount of state-sanctioned economic power being leveraged here by the United States Federal Government.

It’s no problem, either, if the money supply runs low. According to Trump:

This is the United States government. First of all, you never have to default because you print the money.

Don’t worry about the resultant devalued currency. It is also important to ignore the repeating pattern of systematic U.S. violence against any leader or nation attempting to distance itself from the USD as a reserve currency. Libya, Iraq, and now Iran are examples of what happens when Trump’s “most dominant currency anywhere in the World” is challenged. The Violent, Volatile and Drugged Out USD

The following is a only a short overview of some of the illicit activity the USD has facilitated over the years:

This list goes on and on. For as long as it has existed, the United States dollar has leveraged violence to stifle competing currencies, fund war, murder, rape, extortion, kidnapping, theft, terrorism, human trafficking, slavery, medical malpractice, child sexual abuse, illegal drugs and more with relative impunity, thanks to its “regulators.” If this is the result of banking charters and regulation, a hands-off approach might be a better consideration for Donald Trump.

Though the data varies wildly, when it all comes down to it, bitcoin and crypto are no competition for the USD and its fiat counterparts for funding violent, criminal activity. The government itself backs this finding up. Just two years ago, then-U.S. Department of the Treasury officer Jennifer Fowler said:

Although virtual currencies are used for illicit transactions, the volume is small compared to the volume of illicit activity through traditional financial services.

More recent research backs up these findings, and from a global perspective, where total annual market volume for illegal drugs is estimated to be around $400B, even the most generous estimates put all illicit BTC transactions (not just drug-related) at around $72B. The clear winner here then, when it comes to financing violent and criminal activity, is USD and the fiat racket. The president’s Twitter tantrum is telling, and has sparked a momentous, flash explosion of internet commentary. All of this boils down to something rather simple, though. The real difference between USD and bitcoin is easy: one is backed by guns, and the other isn’t.

One is forced upon its users under threat of violence and ultimately death if refused, and the other isn’t. If you choose not to use bitcoin or crypto, nobody cares. But should you try to use money that doesn’t hail from the printers of the glorious Federal Reserve, or attempt to spend USD in a manner that isn’t approved, you can be caged. And if you resist being caged, you may be killed.

This is a government handing paper garbage to someone, and creating value out of “thin air” by putting a pistol to their head to force “adoption.” If this isn’t creating value “based on thin air,” I don’t know what is, Mr. President. This isn’t how bitcoin works. This isn’t how any sane, ethical, or moral system works.

What are your thoughts on Trump’s statements? Let us know in the comments section below.

The post What Are Dollars Used for, President Trump? – The Gun Money Known as USD appeared first on Bitcoin News.

Covering the Basics: How to Maximize Crypto Trading Profits

Cryptocurrency trading is attracting a lot of new investors for all the right reasons. The market is livelier than ever,...