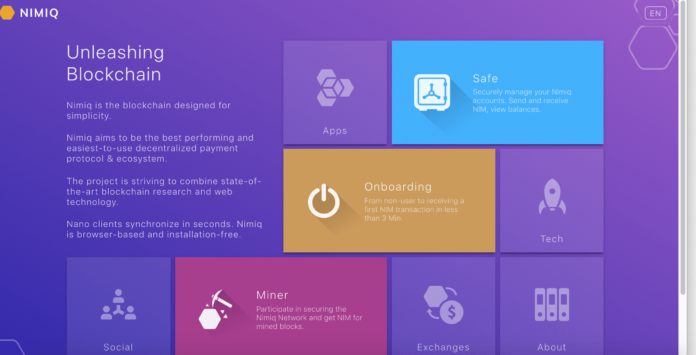 Nimiq is an open-source decentralized peer-to-peer payment protocol for the world wide web. By offering browser-based access, Nimiq aims to lower barriers to entry, and therefore increase blockchain adoption, for communities of new users who may be put off by the friction of using bitcoin and other cryptocurrencies.

In this guide we will cover:

Nimiq has a single vision: to bring blockchain adoption to the mainstream. It aims to achieve this through the development of a payment protocol that’s far easier to use for new market entrants than existing platforms.

Nimiq was written in Javascript ES6, so it runs completely in a web browser with no need to sync to a node. Users can store and exchange NIM tokens using only their browser or a mobile device. The entire platform is designed for ease of use. So much so, that even a total crypto noob could get up and running without ever having heard terms such as wallet, P2P network or cryptography.

Users can also mine NIM tokens easily, using only their web browser (more on that below). The entire setup is designed to avoid implementing any special software, meaning it’s lightweight and can run on any machine, even a mobile device.

Nimiq is also an open source project. Again, due to the simplicity of using Javascript, even beginner developers can get involved.

How Does Nimiq Work?

It’s incredibly simple – everything is done via the browser. You simply go to the Nimiq homepage, and within minutes you can create an account that will allow you to send or receive your first NIM payments. Alternatively, you can start browser mining as detailed below. Range of apps on the platform

How to Mine Nimiq

Nimiq is one of the few projects that you can mine using only a CPU. In line with the mission of the project to be the most simple to use, noob miners can even get started using browser-based mining. This is accessible as an option from the homepage of the project.

More experienced miners can download the node.js client and become a backbone browser. Because backbone miners deliver a higher hash rate than browser miners, the rewards are bigger for a backbone browser. However, the project maintains browser-based mining as part of its vision to remain accessible to the masses.

You can calculate the block reward for mining NIM according to the formula:

This will stay in place until block number 48,692,960, when the block reward thereafter will be fixed at 0.4 NIM. There is an extended rationale for this block reward calculation that is outlined in more detail on the project’s Github. It’s not entirely clear from the documentation online, but we would assume the formula above is the block reward for backbone miners, rather than browser miners.

You can either mine NIM solo, or you can join one of the mining pools. A current list of active mining pools is available on the project site.

There is a total supply of 21 billion NIM, of which 12 percent, or 2.5 billion were released at the genesis block. The remainder are mineable according to the formula shown above.

The NIM token started life as the NET token, an ERC-20 token. Nimiq initially launched NET in order to launch an ICO, which successfully raised $10m during June and July 2017.  The Nimiq mainnet went live in April 2018, at which time NET token holders could swap out for NIM tokens.

Since the mainnet launch, the team has been focusing efforts on system development including back and front end improvements, along with marketing and community building. The team officially deactivated the NET smart contract in December, with more than 80 percent of available NIM tokens activated at that time.

Nimiq was created by Robin Linus and Philipp von Styp-Rekowsky. There are currently 18 other team members listed on the website, playing various roles. As at January 2019, a major internal conflict became apparent when Linus returned from a six-month absence and posted various grievances with the project publicly on Reddit.

In turn, the Nimiq team (presumably led by Styp-Rekoswky) blasted back in a Medium post, responding to the points raised by Linus and announcing his departure from the project. While the price of Nimiq took an immediate dip, the long-term impact remains to be seen. The departure seems dramatic. However, given Linus had already been absent for the last six months, then perhaps NIM will make a quick recovery.

The 2019 roadmap details planned major and minor developments. Most notably, Nimiq plans to launch an exchange functionality and switch over from a JS to a Rust language-based implementation across the platform. The project will also launch a payment plugin for web shops.

The NIM token is relatively new due to the fact that it only launched when the mainnet went live in 2018. There were a couple of spikes in price: one at the start of September, and two more at the end of October and the end of November.

As of January 2019, the price took a dramatic dip due to the internal dispute outlined above.

Nimiq is occupying a fairly specific niche in the crypto markets. In terms of becoming an easy to use, instant cryptocurrency, it’s comparable to Dash. However, Dash started as a fork of Bitcoin so cannot boast the simplicity of NIM.

There are other projects based on Javascript, such as Ark or Lisk, but they are looking to fulfill broader use cases than simply payments. Nimiq seems to be the only one in its niche that’s working on Javascript-based simplicity for a pure, browser-based payment solution.

Where to Buy NIM

TradeSatoshi and HitBTC are currently the two biggest exchanges for buying NIM tokens. Since Nimiq launched the mainnet, it’s no longer an ERC-20 token. This means each exchange needs configuration for NIM trading pairs, therefore only a few exchanges currently support the token.

However, at the time of writing, Changelly integration for NIM has just launched, allowing fiat exchanges. Therefore, Changelly may soon take over as one of the more popular exchanges for buying the tokens.

Where to Store NIM

For cold storage, the ever-trusty Ledger Nano S wallet offers NIM integration. If you don’t have one, then the Nimiq platform offers a proprietary hot storage wallet called Nimiq Safe where you can send and receive NIM tokens.

Although it is still a relatively obscure altcoin, Nimiq shows potential. It isn’t trying to be all things to all people. It has a clear and simple vision of being… well, clear and simple to use. Crypto still has barriers to adoption, particularly for the more tech-phobic people in the world, and Nimiq is aiming to overcome those barriers. In this respect, it could be more attractive for non-crypto folk than bitcoin or ETH.

However, washing one’s laundry in public is never a good move for any team in any organization. Let alone a decentralized crypto organization that’s dependent on a loyal community to survive.

The team at Nimiq have acted swiftly in dealing with the Reddit revolt of its co-founder. However, they now have some work to do to ensure that the community doesn’t lose hope in the vision of the project. If they can achieve that and get the price back up over the next few weeks and months, Nimiq still has a shot at a bright future.

The post What Is Nimiq (NIM)? The Browser-Based Blockchain appeared first on CoinCentral.

A recent Senate Judiciary Subcommittee hearing on Border Security and Immigration has revealed that Mexican drug cartels are now more...