The Bitcoin Halvening (or halving) is a significant moment in Bitcoin’s history. Bitcoin’s Halvening is a pre-programmed event that protects Bitcoin from inflation and helps ensure a degree of scarcity for the digital asset.

Before we get into the thick of the Bitcoin Halvening discussion, let’s take two minutes to go over some quick halvening questions. Then, we can get into the juicy stuff.

What is the Bitcoin Halving?

The Bitcoin Halving is an event pre-determined by Bitcoin’s programming where mining rewards are cut in half. Basically, the amount of BTC miners can earn as a reward for validating the next Bitcoin block is cut in half.

Why is the Bitcoin Halving Important?

Bitcoin’s many Halving events seek to give the asset an element of “scarcity” to protect its long-term value. Bitcoin would become nearly as scarce as gold.

This Bitcoin Halving event will cause the asset’s inflation rate to drop to 1.8%, making it lower than the inflation rate of the U.S. Dollar. This is particularly notable in 2020, as the United States has been printing trillions of dollars in economic stimulus packages to tackle the economical chaos caused by the COVID pandemic.

“The Halving is an important event for Bitcoin, but it’s just one element in the perfect storm that BTC is enjoying at the moment,” comments Alex Mashinsky, CEO of Celsius Network. “Governments around the world are implementing unprecedented fiscal stimulus, which risks causing high inflation across fiat currencies, which reinforces Bitcoin’s value proposition as a deflationary asset. As a result, many first time retail investors are flocking to BTC as a way to protect their wealth.”

Every future Halving will make Bitcoin more scarce. Since we primarily see BTC’s value as a relation to USD, we have two diametrically opposed forces that point to a higher Bitcoin price.

Halving events tend to come with a flood of industry price speculation, which mostly assumes the Halving event will cause a surge in Bitcoin’s price.

How Many Bitcoin Halvings are there?

Halvings occur every 210,000 blocks until the block mining subsidy reaches 1 satoshi, the smallest unit of bitcoin (0.00000001 BTC). Once the final Halving event occurs, the next block subsidy drops to zero, and miners will no longer be awarded block mining subsidies but can still collect transaction fees.

The last Bitcoin halving is expected to be in 2140. Be sure to read our article about it then– don’t forget!

How many bitcoins are there? Notice the slight curves due to prior bitcoin halvenings

When is the Bext Bitcoin Halving?

Bitcoin’s next Halving event is expected to occur in May 2020, with various sources targeting a May 12th to May 16th date range.

The first Halving occurred on November 28th, 2012. The halving block was mined by SlushPool by a miner using a Radeon HD 5800 miner.

It’s worth noting that just because the BTC reward is lower doesn’t make mining any less attractive. Bitcoin’s price has increased throughout the years. Earning the block reward in 2016 was worth about $16,250, whereas the new block reward post-Halving 2020 would be worth about $53,125. A common question many have is why not keep the bitcoin reward the same throughout its existence? The answer brings us to the concept of scarcity.

If Bitcoin were to keep the reward consistent at 50 BTC, that would mean only 420,000 blocks would offer the reward until the 21 million BTC cap is hit, which would have happened at some point in 2016.

This would have been extremely detrimental to Bitcoin’s user adoption since the technology was still relatively new and only a small minority of the population would hold the vast majority of the Bitcoin.

At first, an early decrease in accessibility might make Bitcoin seem to be more valuable, but ultimately, this would repel many early-stage users. If there are fewer people capable of using it, then the digital asset would essentially be trapped in a gilded cage of low liquidity.

Following along the trail of events, low liquidity would increase the risk of holding the asset, chipping away at its inherent value.

The supply and demand among the small group of Bitcoin hoarders would determine the price.

The price of BTC would be artificially inflated and holding (hoarding BTC) becomes a game of hot potato. Any individual whale with massive holdings could tank the price at any moment, further increasing the volatility risk of the asset.

One of the core drivers of Bitcoin’s price is user adoption, and by placing such unreasonable hurdles on new users (high volatility and high costs to enter the Bitcoin ecosystem), few newcomers would venture into relatively unfamiliar cryptocurrency territory.

With so many comparable digital assets such as Litecoin, user adoption would not bode well for Bitcoin.

One the other side of the scarcity extremities, we could remove the 21 million cap to understand Bitcoin’s mechanics.

If Bitcoin were to keep the reward at 50 BTC but removed the 21 million cap, there would be a theoretical infinity of BTC available on market over a long enough time frame. This would flood the markets in the long-term creating an essentially worthless digital asset. Each new year would theoretically slightly devalue the asset. If you need any real-world evidence, just take a look at the Venezuela cryptocurrency situation and why so many Venezuelans have embraced Bitcoin.

The 21 million cap and the periodic halvening events help to ensure that Bitcoin offers users the best of both value retention and usability.

How Will the Halving Affect Bitcoin’s Price?

If you’ve been reading CoinCentral for a while, you’ll know we don’t speculate on asset prices. We’ll leave that to the Twitter day traders that soundlessly delete their tweet predictions when wrong. Trixy hobbitses.

However, there are a few logical arguments that can be made for Bitcoin’s price moving in either direction. Bitcoin’s price did increase after the first two halvings, but it’s hard to tell whether this is merely correlation or causation. 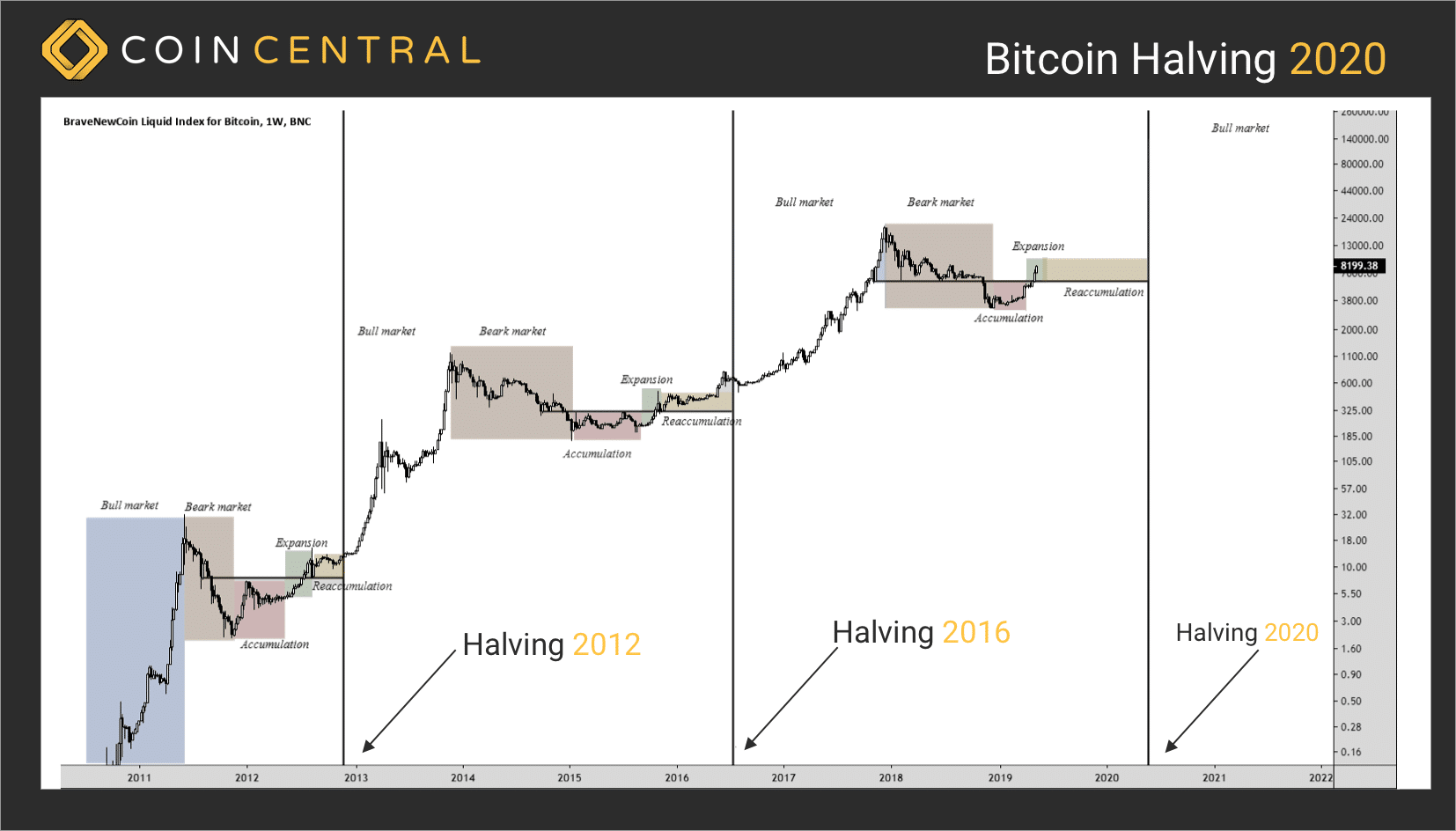 Will there be a price jump after bitcoin halvening 2020? Only time will tell.

That being said, many influential and respectable figures in the space have made price predictions, many of which are predicated on Bitcoin being a scarce asset.

But take any prediction on the Internet with a spoonful of salt. John McAfee, for example, made a lot of noise with a $1,000,000 bitcoin prediction but soon backed out once proven wrong by the test of time.

In a pure vacuum where only basic market forces and mathematics prevailed, Bitcoin’s price would go up after a halvening because of scarcity, but the reality is far more complicated than that. In lieu of us jumping into a rabbit hole here, feel free to shoot us an email if you’d like us to go into greater detail in another article.

Regardless of its impact on price, the Bitcoin halvening is a unique piece of digital asset history. By sheer resilience, Bitcoin has proven countless doubters and antagonists wrong. Each successful milestone of its programming keeps Bitcoin on its path to being a resilient, decentralized, and global means of exchange and store of value.

“In 2016, I didn’t participate in the halving and all things considered, it was a minor event,” comments Catherine Coley, CEO of Binance.US. “The real rally happened 18 months later. On the whole, I’m bullish on Bitcoin long-term, whether not this event changes the prices noticeably or not. With unemployment and stimulus funding flooding our USD system, I think more people are looking for an alternative exposure to a market that’s unrelated to USD.”

The halving doesn’t require much, or any action, on your part. If you hold the digital asset, it’s worth your while to develop a more intimate understanding of how it works. Learning this unlocks the flood gates to better understanding global monetary policy in an increasingly more tech-enabled, a crucial lesson given the current economic conditions.

To get a better understanding of Bitcoin, read our Bitcoin guide or Bitcoin for dummies guide.

The post What is the Bitcoin Halvening and Why It Matters appeared first on CoinCentral.