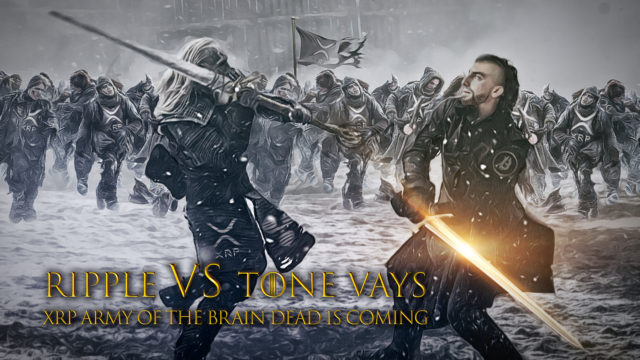 If you’ve been following veteran cryptocurrency trader and analyst, Tone Vays, on Twitter or Youtube for the past six months, it’s possible that you might have noticed a hint of negative sentiment from him towards XRP and Ripple. In an exclusive interview with Bitcoinist, we tried to get to the bottom of what he dislikes the most about the project.

The battle against the ‘XRP army of the brain dead’ begins. Take it away, Tone… 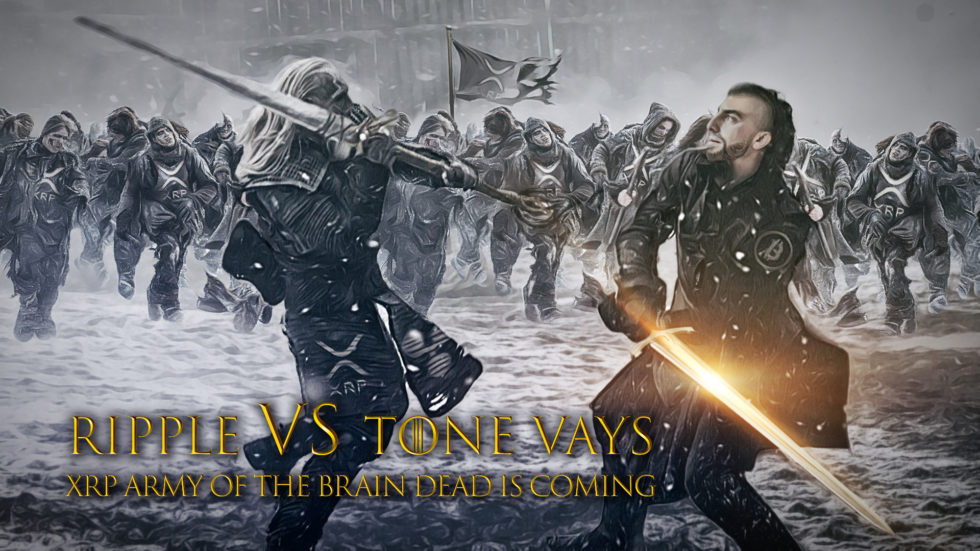 1. XRP is just a security masquerading as a cryptocurrency

$XRP is a token created & controlled by Ripple Labs (aka Ripple the Corporation). They have tried to dissociate from $XRP but smart people know better. I believe $XRP has always been an unlicensed/unregistered/uncompliant security of Ripple Labs.

A devastating first blow. To be fair, it is hard to swallow Ripple’s protestations that it has no control over XRP, when it regularly dumps a billion more of them on the market. The ongoing lawsuit is expected to continue on December 4th, when Ripple will have to respond to the new filing put forward by the claimant that argues the monthly escrow release of XRP makes it an ongoing securities sale.

2. XRP has no real utility

The utility of $XRP is completely fictional. There is absolutely no need to have a volatile currency and/or security in the middle of sending data within the company or even sending data between two companies. In addition this volatility is created by speculation & trading on non-compliant exchanges.

Vays most recently questioned the utility of XRP when Ripple announced a partnership with BitPay to enable XRP for payments. Was it positioning itself as a Libra competitor, or trying to take over as a global reserve currency?

Why is $XRP being accepted for payment? Can someone at @Ripple explain what #XRP is? Is it a currency? Are you officially announcing that you have done what @Libra_ is trying to do? Are you competing with $EUR & $USD like #Bitcoin as a global currency? https://t.co/rtDG9CuSSU

3. XRP is not Decentralized

The claim that anything related to Ripple Labs or the $XRP token technology & its nodes being decentralized is totally laughable. If $XRP is discovered to be used in illicit markets it would be shut down over night with a phone call from US Authorities to the Ripple CEO.

Back in May, Vays tweeted that XRP is ‘NOT decentralized or trustless’ and ‘NOT even a Blockchain’. Some argued that the XRP ledger would continue to exist if Ripple was shut down, hence it was decentralized, but in a later post Vays quashed this idea also.

He highlighted that when Iran turned to Bitcoin last year to avoid US sanctions, as reported by Bitcoinist, there was nothing any Government was able to do about it. Vays argued that had it been XRP that Iran used instead of Bitcoin, Ripple would’ve been coerced by Government officials to use of XRP. This, he says, is what defines the difference between Bitcoin, and centralized shitcoins.

Q: What’s the difference btwn #Bitcoin & #Shitcoin?
A: If it’s NOT bitcoin, it’s probably centralized! Just imagine what would happen to #Ripple Project. if say ‘hypothetically’ Iran announced they will be using the $XRP token to avoid US Sanctions [Ripple was randomly selected] pic.twitter.com/0Y4ndijHqK

The only reason for $XRP to exist is for a few people to get super rich and have competitive advantage over their more honest competition that chose not to print their own money, or create unregistered securities providing the same service. With this money, they are able to buy influence with government officials, hire former SEC heads as their lawyers, promote with former US Presidents, and buy into failing companies like MoneyGram to pump $XRP.

A tweet back in August set out Vays’ understanding of Ripple’s business plan. Certainly the MoneyGram tie-up pumped XRP a good 15% back in June, so arguably the plan has worked in the past. More recently, XRP price has been having a somewhat worse time of it though, even after its highly anticipated Swell conference.

You really can’t make this shit up

#Ripple‘s Success Plan:
1. Create & Pump useless $XRP token while keeping 75%+ for yourself to sell later to bag holders
2. Use $$$ to buy stock of failing Companies (Ex: MoneyGram)
3. Use news to wake up “Army of the Brain Dead” & pump XRP pic.twitter.com/nqUqNk0etA

This is by no means the first time Tone Vays has spoken out about his concerns regarding Ripple and its native currency, XRP. Back in 2017, Vays spoke with Bitcoin developer, Peter Todd, on an episode of Cryptoscam podcast about Ripple’s suspect founder, Jed Mcaleb, and the project’s questionable value proposition. In the end, it was concluded that, “the Ripple system doesn’t have a clear need for XRP”.

Aside from labelling the XRP army as ‘brain dead’, Vays has moved into the event organising game. Last month saw his Financial Summit event launch in Bali, and back in April he hosted the Understanding Bitcoin conference in Malta.

Perhaps most exciting, is the upcoming Unconfiscatable event next February in Vegas. A Bitcoin conference, poker tournament and unashamedly carnivore dinner rolled up in one. Vays certainly knows what makes Bitcoiners tick.

What do you make of Tone Vay’s arguments against XRP? Add your thoughts below!

The post What Tone Vays Hates Most About Ripple’s XRP Token appeared first on Bitcoinist.com.

No One is Spending Bitcoin For Fear of the Tax Man

Spending Bitcoin (BTC) may be easy, but mainstream users are avoiding it. There may be one reason – the recent...