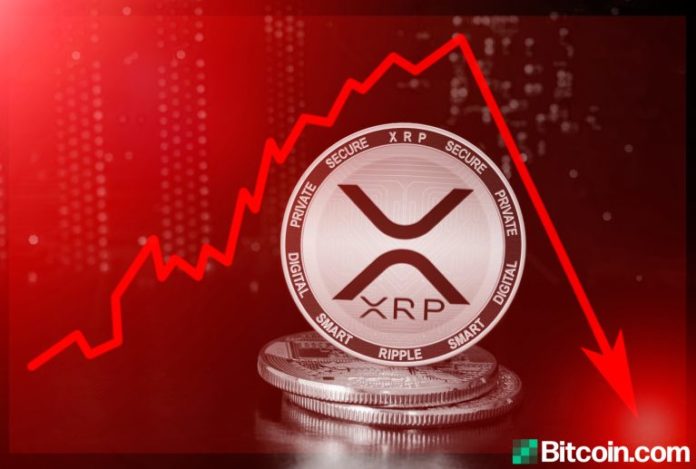 A number of XRP traders are complaining about massive liquidations on Bitmex as the price of XRP spiked and was brought down by 56% in a single candle. After the incident, well known traders with leveraged positions took to Twitter to complain about the upset as some investors were completely liquidated.

Traders Complain About XRP’s 56% Drop in One Candle

XRP traders got extremely upset on Thursday when the price of XRP went from a high of $0.32 to a low of $0.14 in one trading candle on Bitmex exchange. This means the price swing or “flash crash” took place in the blink of an eye and movements like that catch lots of traders off-guard. One trader Marc de Koning took to Twitter and said “WTF — This is really not okay — My stop didn’t trigger and my entire Bitmex account is […] gone.” The blockchain analytics organization Fiatleak even complained about the XRP action and people noticed glitches on the website.

“The site is wobbling and staggering under the combined weight of many, many thousands of XRP fanatics watching a technical breakout,” the website’s official Twitter account noted. “We’re working on it, but keep trying … you can’t break the site any more than you already are.”

Popular analyst Jacob Canfield discussed the odd price movements with his 48,000 Twitter followers. “XRP traded from $.34 to $.14 in one candle on Bitmex,” Canfield tweeted. “My mama told me that’s the devils coin and I’m starting to believe her.” The Twitter account Cryptogainz talked about the subject as well as the XRP liquidations started trending on the social media platform. “If you longed XRP/USD on Bitmex, you’re an idiot,” Cryptogainz said. “You just paid exorbitant funding and got hit with a wick that either stopped you out or liquidated you — You could have paid less in funding and not been liq’d on bybit. This […] is why all my [Bitmex] refs have low longevity.” Cryptocurrency trader and “bubble chaser” Benjamin Blunts called the candle drop “disgraceful.” “That XRP scamwick on Bitmex is disgraceful, I don’t think I’ll ever trade XRP perps on Bitmex after seeing that,” Blunts stressed. The trader added:

Many people blamed the XRP coin itself for lack of real liquidity and also noted that Bitmex is known for liquidations. “XRP is well known for been a crypto that always [screws] its holders and Bitmex well known for making those moves to liquidate accounts, so…,” tweeted Silvia Gutierrez. This is not the first time XRP traders have seen a flash crash and massive liquidations in a short period of time.

Crypto traders complained two years ago about an alleged flash crash on Bitfinex, a year ago another one purportedly took place on Bitstamp. At the moment, there isn’t any official word from Bitmex, but Arthur Hayes’ tweet the day prior also got people fired up over the flash crash drama. “CRipple the shorts,” said Hayes with a picture of the XRP price against USD. “Pro Tip: the Buy and Sell buttons are both equally profitable regardless of whether or not you are trading a turd,” Hayes added.

“The statements you make reflect negatively on Bitmex,” an individual wrote in response to Haye’s tweet. “Very unprofessional/childlike.”

Disclaimer: This article is for informational purposes only. It is not an offer or solicitation of an offer to buy or sell, or a recommendation, endorsement, or sponsorship of any products, services, or companies. Bitcoin.com does not provide investment, tax, legal, or accounting advice. Price articles and market updates are intended for informational purposes only and should not be considered as trading advice. Neither Bitcoin.com nor the author is responsible for any losses or gains, as the ultimate decision to conduct a trade is made by the reader. Always remember that only those in possession of the private keys are in control of the “money.”

Bitcoin has consolidated above $10,000 this week, gaining 45% year-to-date. According to a technical analyst, the rally hasn’t consumed yet....