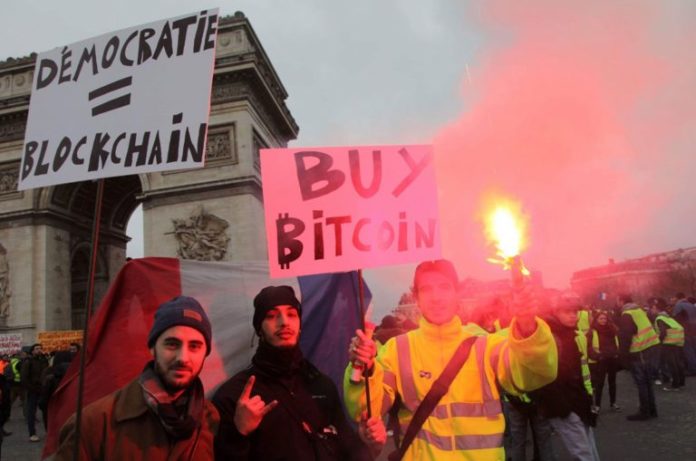 For well over two months, the yellow vest movement in France has continued to keep itself illuminated with fervent protests against taxes, the banking system, and the region’s bureaucrats. On Feb. 1, a group of Gilets Jaunes working at the bill printing factory explained their plan to show the world they mean business by burning pallets of bills, starting with Israeli banknotes.

The grassroots yellow vest movement in France has consistently made headlines across the world while protesting the country’s monetary system and politics. For instance, on Tuesday, Feb. 5, about 18,000 Gilets Jaunes joined a march in the French capital walking side by side with another 12,000 CGT union workers. The protest also followed a demonstration on Friday, which showed employees claiming to work for the Banque de France banknote mill. The yellow vest associated group threatened to burn large sums of paper banknotes. A news.Bitcoin.com correspondent from France explained how the bill burners are demanding fiscal and social justice in a unique fashion.

“In the last 15 days we’ve burned passport paper, bank check paper, and grey card paper for vehicle documents,” explains the banknote burning group’s video on Facebook. “But the French government is completely deaf, so we move to the next level — If the French government continues to make it seem as nothing scandalous is happening, we will make this so all the world will know what’s happening.”

Starting today we start to burn foreign bills stock — The first paper ream we have here is for Israeli banknotes. We start with this, then we burn everything — If the French government doesn’t change, all foreign countries that are waiting for their bills, will not be delivered.

News.Bitcoin.com has covered the yellow vest movement in the past and how many well-known bitcoiners have explained that Gilets Jaunes should really hit the banks where it hurts by moving from fiat to bitcoin. At the same time, the world economy has been shuddering once again and economists are predicting another global depression similar to 2008. Many regions like Venezuela, South Sudan, Turkey, Haiti, Zimbabwe and Argentina are suffering from economic hardships.

The economic uncertainty worldwide has bolstered the dream of hyperbitcoinization. Many have written about this dream and believe that cryptocurrencies like bitcoin will experience mass attention from a majority of citizens living in impoverished countries. The cofounder of the Satoshi Nakamoto Institute, Daniel Krawisz, once said: “A hyperbitcoinization event will be much quicker than a hyperinflation event.” Krawisz’s 2014 essay details how a country dealing with hyperbitcoinization will experience a voluntary transition from an inferior currency to a superior one. The country’s adoption represents a “series of individual acts of entrepreneurship rather than a single monopolist that games the system.”

Hyperbitcoinization should be accompanied by a rapid improvement in productivity and wealth — Hyperbitcoinization will probably be a confusing time for everyone, like a second adolescence. However, once it is over, no one will be able to imagine how we got by with the earlier system.

The yellow vest movement is similar to the Occupy Wall Street movement that took place seven years ago and the birth of Bitcoin four years prior. Global citizens are upset with their leaders and losing confidence in the central bank’s paper bills which are printed by the trillions every year. People from all countries and continents are upset with the system and believe something has got to give. Our correspondent from France told news.Bitcoin.com that most individuals don’t wear yellow vests these days because if you take the train “to go to Paris and they check if you have a yellow vest then they can arrest you.” Not only are the protestors in France threatening to burn large stacks of bills, but they are also now printing special images of yellow vests on banknotes.

Images via Pixabay, Shutterstock, and our correspondent from France.

Blockchair, a popular block explorer, has discovered a minor bug concerning the reporting of Dogecoin transaction data. This bug has...