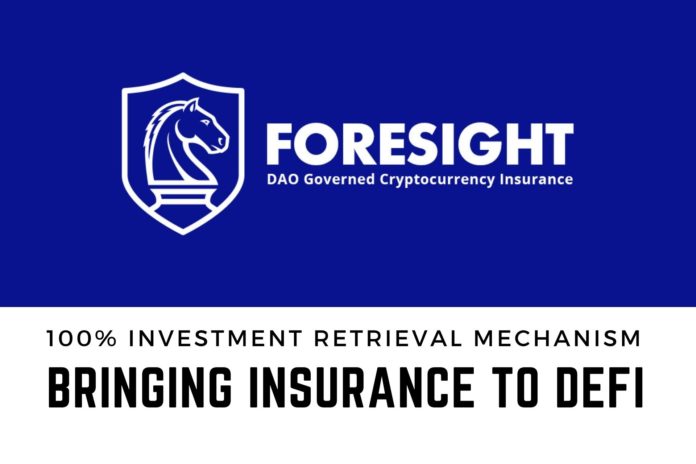 Foresight aims to address one of the core issues currently faced by cryptocurrency investors: exit scams. According to CipherTrace, in 2019 US$3.1 billion was lost as a direct result of cryptocurrency projects which vanished with the money raised from their investors. Foresight imitates the standard insurance policy that is prevalent in traditional markets. However, it does everything on the crypto network and uses a community-based model to compensate investors.

In an era when the scams and tricks have become commonplace, Foresight is designed to protect the investor. Foresight explains that as long as cryptocurrency is a global, largely anonymous, and less-regulated asset class, scams and victimization will occur. The aim of Foresight is not to try preventing these scams from occurring but to protect investors’ funds from the losses they may suffer from the scams.

Foresight plans to leverage the collective intelligence of DAO and smart contracts to undertake this mission. With Foresight, users who are scammed while they have active insurance cover will get due compensation. In other words, whatever investment a user has made on any other platform and lost in an exit scam, Foresight will return the value of their investment to them.

How Does Foresight Work?

In traditional insurance, a user’s claim is reviewed by a claims assessor and either approved or denied according to a strict set of rules (the insurance policy). When it comes to cryptocurrency, where decentralization is important, this approach will not work. Instead of a single middle-man deciding on insurance claims, Foresight will instead leverage the power of DAOs for assessing and ruling on insurance claims.

Not all cryptocurrency projects will be approved for insurance cover. With the help of the DAO, Foresight will also scrutinize cryptocurrency projects to assess the exit scam risk. Projects which are deemed too high a risk will not be covered. All projects approved for cover will be assigned a risk score which will dictate the premium a user will pay when requesting insurance on their investment. The premium rates will be between 2% and 15% of the total investment, with a lower percentage indicating a lower risk project, and vice versa.

The DAO is the sole authority to identify the fraud and compensate the user. Any user can become a DAO member and participate in the functioning of the platform. To do this they will be required to buy Foresight’s token, FORS, and lock this in the platform. Foresight utilizes a two-tiered DAO structure. To join the Common DAO requires an investment of 5,000 FORS and becomes a member of the Supreme DAO that requires 50,000 FORS. The Common DAO mainly is involved with claims assessment and project vetting, whereas the Supreme DAO has additional roles in governance and moderation.

Once a claim is filed, the DAO comes into action and starts deliberating over the claim in a secure and private chat room. Evidence about the alleged scam is presented to them, such as blockchain records and liquidity information, and each member votes whether to approve or deny the claim, a bit like a jury in a court of law. The DAO is given 72 hours to discuss and vote on the claim, at the end of which, if more than 65% of the votes are in favor of the victim, the initial investment amount as stated by the user at the time of buying the insurance plan is paid back in full.

If less than 40% of the Common DAO members vote in favor, then the claim case is denied and close. If there is an equivocal vote of between 40-65% the claim will be forwarded to the Supreme DAO to review the evidence and they to be given 72 hours to deliberate over the issue. Their word is final and binding.

To support the DAO and reward them for their participation in the platform, Foresight has also provided users with a payout system utilizing the native token, FORS.

The DAOs are rewarded with FORS tokens for their work every two weeks. There is a dedicated token allocation for this purpose called the DAO Fund. Furthermore, DAO members can also become a part of the weekly lottery system which rewards 5,000 FORS to one lucky member. Lastly, the DAOs also receive discounts when they take out insurance on the Foresight platform themselves (20% off for the Common DAO and 40% off for the Supreme DAO).

Until the Foresight platform goes live in Q1 2021 the team has established a pool-based staking activity through UniFyre wallet. This allows multiple investors to become a part of a single staking contract. Also, the staking mechanism is flexible, meaning it allows users to withdraw their stakes early, but not without a cost. If an investor leaves the pool early their remaining unclaimed rewards will be distributed among all investors who remain in the pool.

At this time FORS can also be bought from Uniswap, Probit and FatBTC.

In total, there are 100,000,000 tokens minted and 20,000,000 are in circulation. The entire platform is based on ERC-20 technology. Out of the total pool, 30% is the insurance payout fund, 20% is kept for liquidity provisioning and sales, 15% is the DAO fund, 5% each is allocated for the legal and development team. Lastly, 15% and 10% tokens are kept for founders and marketing purposes, respectively.

45% of the total FORS supply is locked for up to 2 years that provides assurance towards the authenticity of the token.

For Investors and Project Teams

Apart from protecting the investors, Foresight can also allow the cryptocurrency project teams to buy insurance for their project on behalf of potential investors. Initially, the investors will be provided with an insurance guarantee, which makes them more welcoming, and they can invest without hesitation.

Secondly, having pre-planned insurance for investors helps the altcoin under consideration get a better trust score. Such a move helps regain investor confidence, which sees a decline due to the increasing prevalence of exit scams and frauds.

All in all, Foresight is a much-needed tool in the cryptocurrency space. It will bring confidence, assurance, and give users the freedom to engage with the cryptocurrency community knowing that their investment is protected. In this way, they can more easily lend the benefit of the doubt to new cryptocurrencies where there is potentially a significant return to be made.

However, having such an insurance mechanism does not always mean that the investment will be paid back. Everything is in the hands of the DAOs who have the power to decide according to the evidence presented to them. Their ability to pre-vet the altcoin projects is also a welcome step. In the future, Foresight will also allow the users to speculate over the success or failure of a project with the use of non-fungible tokens. The Foresight platform is anticipated to go live in Q1 2021.