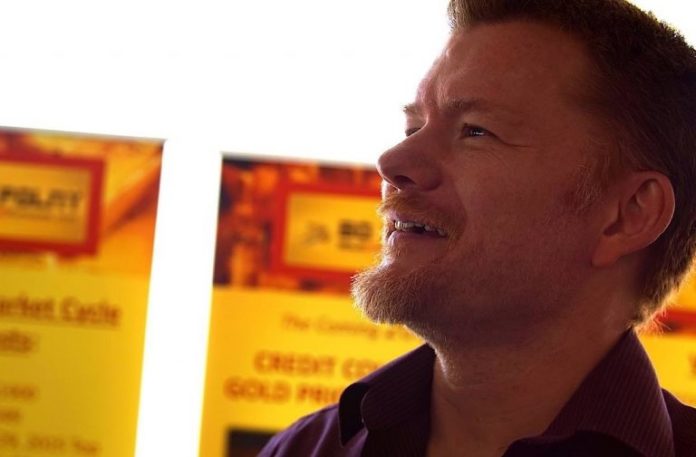 Though his latest project with partner and fellow activist Amanda Rose, Candles in the Dark, is a program helping people escape authoritarian programming through non-confrontational dialogue, there’s nothing meek and mild about Larken Rose’s stance when it comes to government. News.Bitcoin.com recently connected with the outspoken anarchist via Skype to talk about Bitcoin, the IRS, and the importance of permissionless money.

News.Bitcoin.com (BC): How did you get into the crypto space?

Larken Rose (LR): I only accidentally crashed sideways into crypto stuff just because so many people who are into freedom and self-ownership got into it when it came along, realizing it could be a really useful tool to resist centralized control. I’m by no means any sort of expert on it. I was just sort of dragged along for the ride, because at this point it’s kind of hard to not be hearing about it and involved with it if you’re into freedom, because it’s such a useful tool for that.

BC: Do you remember when that was?

LR: It was a number of years ago, and I remember I heard the term a bunch of times before I had the foggiest idea what it meant, and what it referred to. It may have been at Porcfest in New Hampshire, where some of the guys promoting it early on actually gave me some of the physical Bitcoins, back when they were worth like a dollar each, and I think they gave me 20 of them.

And, I sold them at a sadly low rate, well before it went up. I accidentally held onto one of them, without knowing I still had it, but I eventually gave that one to my daughter and she ended up getting a car out of it, so I’m happy about that. But it was a number of years later before I really understood the beauty and the power of the concept of blockchain and decentralized, uncontrollable mediums of exchange. BC: You’re a voluntaryist. More people are learning what that word means lately, but most still don’t know. What’s it all about?

LR: In short, to be a voluntaryist means you advocate that all human interaction be voluntary, rather than by way of violence and coercion. And when you describe it that way, almost everybody initially reacts by saying, ‘Oh yeah, that’s me; I totally agree; that’s what I want too.’

But they don’t recognize that, even if they live that way in their daily lives — when it comes to politics, almost everybody has been taught that there’s an exception for the people who call themselves ‘government,’ and that it’s okay if they threaten violence and rob you by threats of force and boss you around and control you. A voluntaryist is basically somebody who realizes that the whole ‘live and let live’ and ‘do unto others as you would have done unto you,’ there’s not an exception for government.

BC: You’ve touched on this a little already, but where do you see crypto and voluntaryism intersecting?

LR: To me there are two very important pieces that have to go together to actually get a large number of people being able to be free, and eventually society being free. One is the mentality, and that’s what my main focus is on: having people stop believing that they’re obligated to obey a ruling class. But after that, then you need the tools necessary to be ungovernable. And some of those tools are, for example, guns. If you’re gonna resist oppression, if they have guns, it’s convenient if you do too.

But when it comes to currency and all the frauds and the tricks that governments have done by way of fiat currency and central banks and all that garbage, crypto is just a very powerful tool for those who are mentally ready to escape the controls of a ruling class, to be able to trade and basically have a complex international economy that doesn’t have the tentacles of the ruling class in it anywhere. And that’s huge.

BC: What would your response be to those people who say, ‘Yeah, these rules suck, the government’s terrible, but without it, it would be chaos’?

The order and the complexity and the cooperation and the productivity already comes from voluntary interaction. But it’s easy for politicians to scare most people into thinking, ‘Well if nobody’s in charge, if there isn’t a government bossing everyone around, then it will be this chaotic free-for-all.’ There’s no reason to actually believe that.

If you go to a supermarket—it’s one of my favorite examples of anarchy in action—yeah, it has government tentacles in there getting in the way and robbing people, but nobody’s forced to be involved, and you get an amazing level of complexity and organization and cooperation, and nobody’s being forced to do anything—not the people who work there and not the customers who go and buy stuff there. BC: Speaking of governments and money, you had a run-in—well, a run-in is kind of a mild way to put it—but you had some trouble with the IRS. Could you tell us just a little bit about that, and what happened there?”

LR: My adventures with the federal extortion racket are something I don’t usually talk very much about these days, because it takes so much time and effort for people to actually get into it and to learn it. If anybody wants the full story for free, I now give away my book, Kicking the Dragon (Confessions of a Tax Heretic), for free as an e-book.

BC: Could you tell us about your activism? I know Candles in the Dark is going online on Thanksgiving, and you’re speaking at Anarchapulco again this year.

LR: Yep. Well I have a number of books, The Most Dangerous Superstition being the main one, and I’ve given a bunch of talks and I still do here and there. I don’t like to preach to the choir, so usually when I give talks it’s with the intention of it being recorded and ending up on YouTube or something, to talk to the rest of the world. I also just started doing my daily podcast again. But the two main things I’m working on now—one is the Candles in the Dark seminar, and the full online version will be up and running by Thanksgiving and we’re already taking pre-orders now.

What that does, for people who are already voluntaryists, is teach them a drastically more effective method of communicating with the rest of the world, that doesn’t just result in the usual stress and emotions and arguments and frustration, that normal debates almost always end in. It’s not at all what I do in public. When I publicly debate I’m blunt and totally in people’s faces, and that’s for a totally different purpose.

And then the other major—the biggest project I’m working on; probably the biggest project I will do in my whole life—is called The Mirror, which is basically an interactive program that does the whole process for us. So voluntaryists don’t even need to know how to do it; The Mirror will do it for them, all by itself.

BC: So just strap on the VR goggles and set them free from statism.

LR: Pretty much, because it does the conversation by itself. It asks them what they believe about things and their answers determine where it goes next. And that’s a monstrous project which is still many months away from being completed. But ultimately that will make it so we don’t even have to be good at communication, because it will do it for us. So hopefully I won’t get suicided before that’s done. The Future of Crypto Freedom

BC: It seems like there’s a split in the cryptocurrency community at large, where you’ve got the more libertarian-minded crowd that’s saying, ‘We’ve got to use this privately, between ourselves, as peer-to-peer permissionless cash,’ and you’ve got this other group saying, ‘Well, it’s gotta be regulated, and we’ve gotta get the government in on this thing.’

LR: I want the government involved in absolutely nothing. It shouldn’t freaking exist. I’m kind of on that side of the spectrum.

BC: Yeah, I kind of figured.

LR: But what I love about the concept of blockchain and the concept of cryptocurrencies is that the ruling class can try with varying degrees of success to try to stick its nose into different kinds of trading and different cryptos, and it can try to regulate this and that and the other thing, but the thing it can’t ever do away with is the idea.

Now that the ideas of blockchain and cryptocurrencies are out there, there is nothing that will keep it down forever. It’s not like there’s some centralized place where, if they go and shut down that thing, it’s gone forever. Even if there was some magic button that would make Bitcoin disappear—and it doesn’t work that way—another one would appear. And then a hundred more would appear. The ideas are, to me, what is most powerful. It’s the evolution of ideas and technology and understanding that can’t be undone, and that can’t be regulated out of existence. That doesn’t mean they won’t try it, but in the long run they are doomed; they have no chance of squelching this permanently.

What do you think about Rose’s ideas on crypto freedom? Let us know in the comments section below.

The post Activist Larken Rose Weighs In on Bitcoin, Anarchy, and the Importance of Permissionless Cash appeared first on Bitcoin News.

Asia has always been at the forefront of the bitcoin and crypto trading. The US has been too busy tripping...