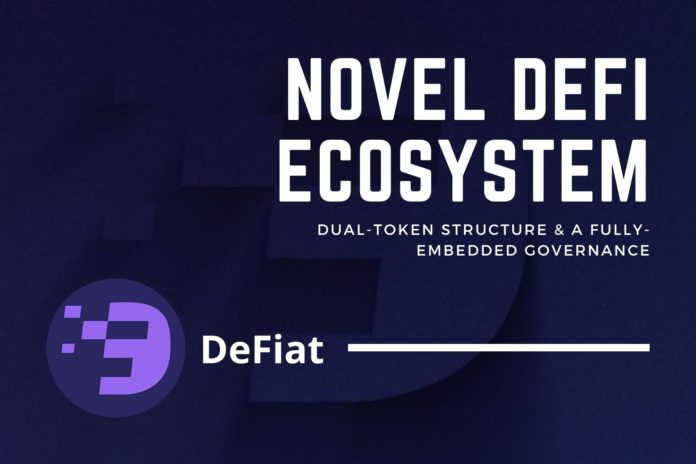 This unique structure makes DeFiat stand-out as an interesting project to follow. Here is a deeper look into events around the DFT tokens.

On August 28, the development team announced that the DeFiat dashboard was finally live on Ethereum. It allows anyone to explore the DFT network and gather information about the ecosystem metrics. For instance, anyone can use the dashboard to see the fee, the burn rates for each transaction, and the real-time supply change.

On August 29, the team revealed that the DFT tokens have been listed on LiveCoinWatch. It will make it possible for those interested in these tokens to get timely updates on any price changes and to capitalize on them.

Key to the operation of the DFT tokens is the deflationary model, which entails burning tokens at every transaction, keeping a downwards pressure on supply. On August 29, the developer team announced that the first token burning event would be held; it took place that day at 13:00 EST.

Once the burning started, TX fees and the burn rate rose from 0% to 0.1%. The team also announced an airdrop on the day for the DFT community. The team promised that more events to receive DFT token were in the works.

The DFT team also announced some major technical updates. The first one was that they were working to have DFT tokens registered on Trust Wallet, Etherscan, and other platforms.

The other technical update was that the governance structure was now live. According to the announcement, developers were monitoring the process and making re-assessments to the framework as needed and are building decentralized voting at the moment.

The team also revealed that the voting contracts were ready and they were undergoing tests. Community voting would be set up in the coming weeks. According to the announcement, voters would need DFTP and DFT to participate. There are also rewards built into the contracts so that if someone takes part in the voting process, they could win DFT.

Here’s an exclusive screenshot of their future voting platform (courtesy of the team): Another important announcement on that day was that yield farming was ready. DeFiat farming relies on a specific code (contrary to many SNX rewards clone) that enhances the farming experience: like an entryFee on stake (to incentivize users to keep staking until breakeven). Also, the mechanisms used to calculate the share of stake relies on an internal metric called stakingPoints. These points are earned over time with stake. The user’s share of stake is therefore not his current balance of tokens vs the pool tokens but the ratio of his stakingPoints vs. the pool’s stakingPoints.

According to the team, it’s a foundational element of their future product called AnyStake: A farming solution that will allow any ERC20 to be staked. Using the staking points, the team says they can incorporate a price element in the calculation and make AnyStake a reality.

On August 31, DeFiat announced the launch of the ecosystem’s first competition, which was a MEME competition. It entailed created of images, videos, or gifs related to DeFiat and was held between August 31 and September 7, 2020. The DeFiat team picked three winners with each one getting 300 DFT, 150 DFT, and 50 DFT respectively.

In total, the TEAM tokens are 24,000 DFT, which represents slightly less than 5% of the total supply. Lengthy vesting periods of up to 10 months show that the team is in it for the long haul and they are not planning a quick pump and dump event. The team has published the code of these locking contracts on Ethereum.

On September 1, 2020, the team revealed that DFT tokens had been listed on CoinGecko. It was a huge achievement since the project was barely a week old when it received the green light. The listing means that anyone can view the price, market cap, volume, exchange list, charts, and much more on DFT tokens.

On September 5, 2020, the team submitted the staking contract for auditing with Hacken. Only a few days later, the team received and began implementing feedback from the audit. Staking went live on September 14, 2020, allowing anyone with DFT tokens to stake their tokens and receive rewards.

On September 16, the community decided to increase the rewards in the DeFiat Dungeon by 50%. The team also decided to reduce the entry fee to 0.1% to combat the high gas fees. To thank the early adopters who staked during the high gas fees, the first 100 stakers were awarded 1 DFT.

That has been the progress of the DeFiat project thus far. It is barely a few weeks old and it is already achieving most of its intended objectives. As the community grows and the team forms more partnerships with players within the DeFi space, great things are expected to come out of DeFiat.