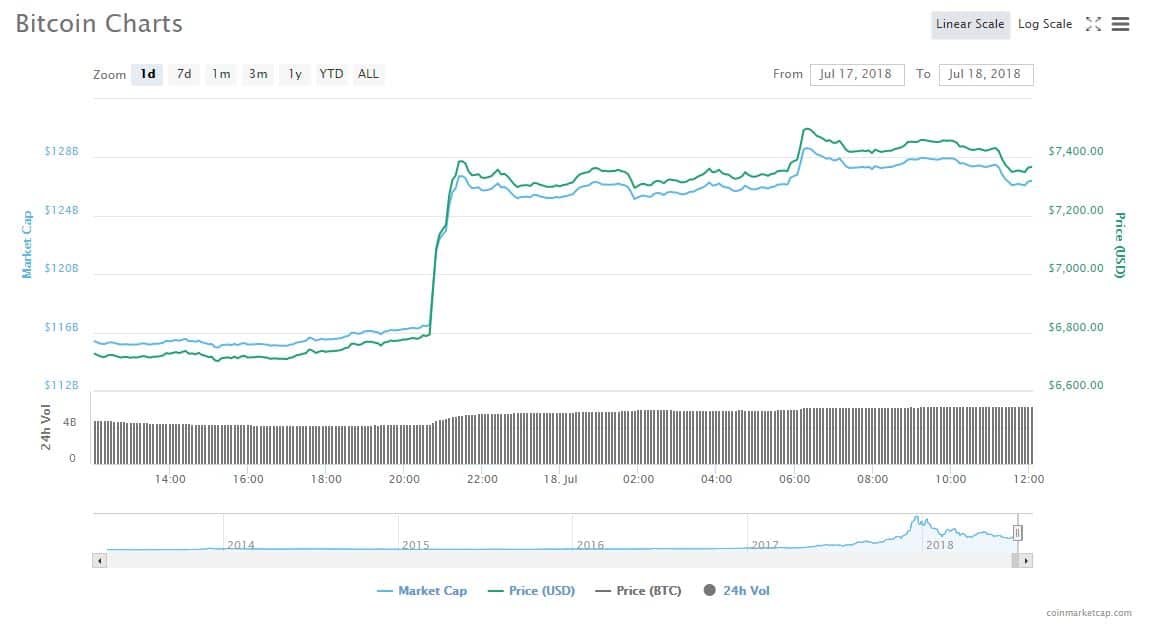 This is the highest price for Bitcoin for three months, and this jump took place within sixty minutes yesterday (17th of July) between 20:30 and 21:30 UTC. What could have caused it?

Markets being as they are, it is difficult to list all factors affecting the price of any major commodity/currency when it exists in only a single country, so accounting for all variables affecting an intrinsically international and infamously volatile item like Bitcoin may be impossible. However there were some major developments which are typically accepted as driving the bear market.

The first thing to mention would be when all major Western media platforms banned cryptocurrency advertising as a response to the infestation of scams. Cryptocurrency companies rely on the internet to advertise, so this was a major blow.

Thefts of enormous amounts of money from cryptocurrency exchanges such as Coincheck of Japan, BitGrail of Italy, Binance of Hong Kong and Coinrail of South Korea definitely also played a part in denting public confidence.

The decisions of financial regulators in major markets also had an effect. In the US, the Internal Revenue Service won its case against that country’s top cryptocurrency exchange in February, resulting in the personal data of all high-earning customers being revealed to the taxman. The Securities and Exchange Commission announced in March that all trading platforms would have to register to operate in that country, and the Commodity Futures Trading Commission sent subpoenas to several American exchanges over suspicions of price manipulation.

Many aspects of cryptocurrency business were banned in China in 2017, but the appointment of a new central bank governor raised hopes that that country might become a Bitcoin powerhouse again. However this was not the case, as the new governor and his deputy turned out to be just as strictly anti-Bitcoin as their predecessors.

In Japan, the Financial Services Agency cracked down hard following the theft of hundreds of millions of dollars of cryptocurrency from Coincheck.

Other factors included unexplained movements of large amounts of Bitcoin from wallets that hold enough money to destroy the Bitcoin economy, reports of crypto-jacking viruses infecting thousands of computers worldwide, fears that the entire Bitcoin network is at risk of being dominated by one Chinese company, and more than one widely-publicised study claiming that Bitcoin value is being manipulated from behind the scenes.

These are just some of factors generally accepted to be behind the downturn in vfalue.

So what has changed?

It can be speculated that the upturn in price is the result of one major announcement on a backdrop of a general global warming of regulator-cryptocurrency relations.

The major announcement was the announcement of the CEO of Blackrock, one of the biggest and most influential companies in the world, that he had changed his mind about cryptocurrency (he was not a fan) and would be creating a team to look into cryptocurrency investment. Blackrock has a market capitalisation of approximately $82 billion and manages trillions of dollars’ worth of assets – it has been described as the world’s largest shadow bank.

Regarding global legislation, there has been a general trend over the last few months of legislation becoming more accommodating. For example, we recently reported the passing of new cryptocurrency-friendly laws in Malta, Japan and South Korea. While Malta is a small economy looking to attract business, Japan and South Korea are major economies in general and major markets for Bitcoin specifically. Events in both of these places have proven to have had dramatic effects on the market in the past.

The US SEC has also begun to send positive signals. In June it ruled that Ethereum is not a security, causing the price of that token to jump dramatically, and it even released guidelines for a successful and legal initial coin offering. Similarly, the finance minister of France recently expressed his enthusiasm for cryptocurrency and the UK government has begun to slowly notice the industry as more than £500 million has been invested in UK blockchain companies in the last year and a half.

Bermuda recently announced itself as a cryptocurrency hub too – while obviously not a major world economy, the presence of more business-friendly jurisdictions is always a positive sign for any industry.

An article in Forbes argues that the market upturn is only going to continue as FOMO continues to be a factor in investor behaviour.

Matthew Newton, a market analyst at eToro, said: “We’ve seen a flurry of positive announcements this week, including a nod from the FSB [Financial Stability Board] and a big-pocket investor like BlackRock. After a few weeks in the doldrums, news like this goes a long way in lending legitimacy to crypto as an asset class, which is powerful over the long-term.

However, good news is not as influential as bad in a bear market. The market was quietening down over the last week, which is typical around market bottoms when investors lose interest and focus on other things. A great technical setup yesterday may also have helped spur prices forward.

Investors would be wise to remain cautious, as we saw a similar situation in April where some big short positions were squeezed causing the price to surge. That said, if bitcoin pushes past $8k, it’ll indicate that the bull is back and prices could continue to climb further.”