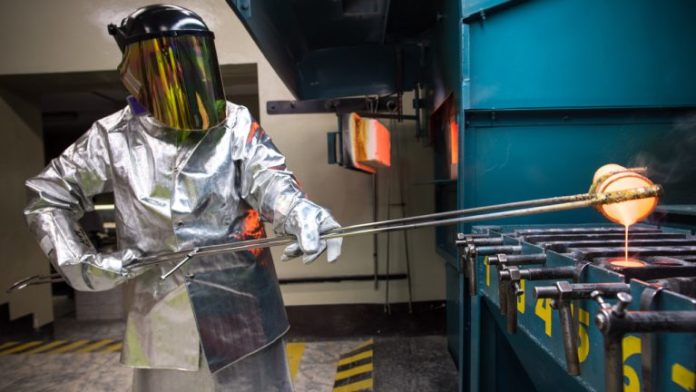 During the last few weeks, gold has skyrocketed in value over the concerns fueled by the faltering global economy. Despite the fact that gold has always been a safe-haven, many investors are looking to bitcoin because they fear central banks will dilute the market or even confiscate the gold.

Prior to Covid-19, central banks purchased massive amounts of gold and alongside this, a number of countries are having serious issues repatriating their gold reserves. This has caused investors worldwide to question gold over crypto assets.

There’s no doubt that gold has been on a tear, but many people have concerns about the precious metal being a solid safe-haven due to a number of factors. In recent years, investors have found cryptocurrencies like bitcoin (BTC) have a number of benefits that gold cannot offer.

At the time of publication, one troy ounce of .999 fine gold is trading for $1,963 and many investors believe the price is headed higher. But some of the biggest issues with gold, in comparison to crypto assets, is the problem with storage. A few hundred thousand dollars worth of gold held by a single individual isn’t not as easy as say storing $300,000 worth of BTC. An individual has to secure the precious metal by hiding it and leveraging a safe, and oftentimes people with that much gold have a third-party store it for them.

Safes and added custodial security create extra costs to investing in gold and storing the metal with a third party means you have to trust them. The gold custodian could get robbed or a government entity could seize the metal leaving all the investors high and dry.

Moreover, governments have been known to seize peoples gold. One of the most famous instances of this type of event occurred in 1933, when American President Franklin D. Roosevelt (FDR) invoked the Emergency Banking Act. At that time, FDR also issued Executive order 6102 which forbade the hoarding of gold certificates, bullion, and gold coins.

According to FDR, the move to seize American gold stashes was meant to stimulate economic growth during the Great Depression. On April 5, 1933, FDR signed Executive order 6102, and citizens were mandated to take their bars, coins, and certificates to the Fed. They were paid $20.67 per ounce and after the Emergency Banking Act was lifted, FDR raised the price to $35 per ounce.

Many people wholeheartedly believe that this “could never happen again” but the reason why it did happen was so FDR and the banking cartel could strike 40% off the dollar and bolster the economy. The reason it could happen again is because the USD has been declining in value for years.

On July 30, 2020, the USD’s trade-weighted index dropped to a two-year low against a basket of other fiat currencies. The U.S. government could easily invoke another executive order against gold in order to keep the reserve currency of the world afloat. Furthermore, back in 1933, FDR had government entities conduct a nationwide search for gold coin, bullion, and certificates as part of the government’s “confiscation policy.”

There are a few high-profile U.S. gold confiscation enforcement that the American press covered at the time. For instance, the federal government seized double eagles worth $12.5 million at the time from an investor who was holding the coins for a Switzerland-based firm.

Another individual was charged when he tried to withdraw 5,000 ounces of gold worth $9.6 million today. Banks holding gold would notify government entities if someone was withdrawing gold and the man with the 5,000 ounces was greeted by federal agents that day. In addition to the U.S., other countries like China and Japan have had cases where gold smuggling is common and governments seize people’s gold.

Gold investors are also scared about the massive amounts of precious metal central banks have held in reserve and many suspect they could dilute the market. There are a number of central banks doing shady things with gold reserves and some of them are not allowing other countries to withdraw.

Many countries have tried to repatriate their gold, but have had significant issues from central banks. Venezuela, the Netherlands, Germany, Belgium, Switzerland, Austria, India, and Bangladesh all have had problems attempting to repatriate their gold. The countries holding these reserves could weaken the value of gold, by simply selling off massive amounts during times of economic distress.

Statistics show that the U.S. is the largest holder of gold reserves and the country is followed by Germany, the International Monetary Fund, Italy, France, Russia, China, Switzerland, Japan, India, the Netherlands, and the European Union.

In April, financial columnist David Fickling said that it was possible central banks could sell these reserves in an emergency. This happened during the 2007-2008 economic crisis as gold was supposed to be a safe haven after the 2007 Bear Stearns emergency bailout, but central banks dumped gold to provide liquidity.

Gold has been a safe haven asset for centuries, but crypto assets are far more portable and they require far less security. A person can easily send a million dollars worth of ethereum (ETH) or bitcoin cash (BCH) to anyone in the world in a matter of no time. Moving a million dollars worth of gold is not as easy. It would be much harder to seize people’s digital currencies as well, as a million dollars can simply be hidden in a twelve-word mnemonic phrase. Just the other day, news.Bitcoin.com’s financial columnist, Jeffrey Gogo, reported on how the gold bull Dennis Gartman is moving out of gold, because the market has become “too crowded.”

An individual can store a million dollars in bitcoin without paying custodial costs and do so in a noncustodial fashion. Even central banks who are attempting to repatriate their gold reserves, would have been in much better shape if they leveraged crypto assets over gold reserves. There is no doubt that gold will continue to be thought of as a safe-haven asset, but there is also no doubt that crypto-assets offer people significant advantages over precious metals like gold.

Ethereum‘s Breakout Rally Suggests Bitcoin is Poised to Explode Past $12,000

Ethereum and Bitcoin are both showing immense signs of strength today as they push towards their recently established key resistance...