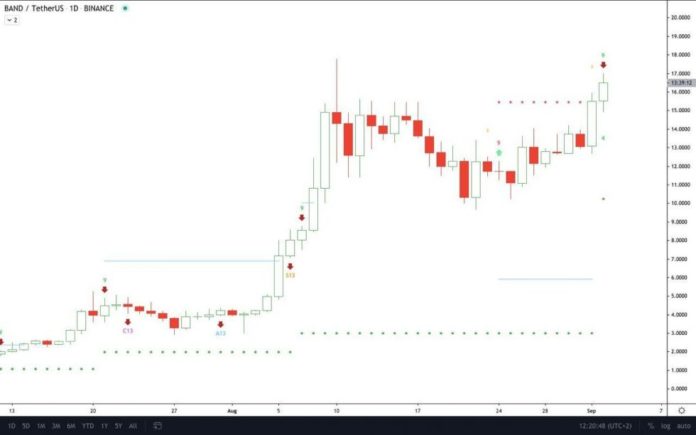 Band is preparing for a strong correction after rallying dozens of percent since the lows around two weeks ago.

According to a Telegram channel tracking signals pertaining to the Tom Demark Sequential, BAND is in a bad spot. The cryptocurrency has formed a “sell 9” candle on its daily chart against BTC and the U.S. dollar per the channel.

Such signals are most often seen before an asset sees a reversal in its ongoing trend; in the case of BAND, that would likely mean a pause/consolidation or a move to the downside.

Fundamentals Remain Bullish for the Coin

The fundamentals of Band remain bullish despite the recent price weakness and the sell signals. The team behind the cryptocurrency project recently announced that it has partnered with the Tron Foundation to bring its technology to the TRON ecosystem:

“TRONFoundation has strategically partnered and successfully integrated Band Protocol into TRON, one of the largest blockchain platforms, to provide scalable and secure $BAND oracles for an ecosystem with almost 1000 decentralized applications.”

Some in the space see this as a validation of the cryptocurrency, with this seemingly being its most notable partnership to date:

“We are ecstatic to enhance TRON with the most valuable oracle product on the market. This integration marks a new era of high-quality partners, protocols, and services migrating to TRON’s blockchain. The future of blockchain technology is bright as we kick off a series of TRON DeFi partnerships to come,” said TRON founder Justin Sun on the matter of the partnership.

Band has also announced a series of other partnerships that are likely to bolster usage of the coin and its technologies moving forward. Yet the TRON announcement seems to be the most notable to date.

Why Fusion’s DCRM is The Best Option for DeFi Users

The race for blockchain interoperability was very much a trending topic during the bull market of 2017. Back then, we...