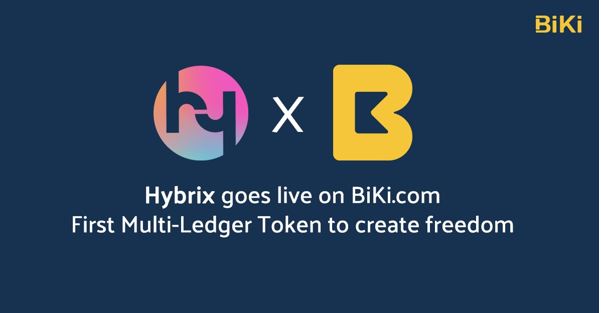 Singapore, 15th May, 2020 – Global digital assets trading firm BiKi.com is pleased to announce the listing of the multi-ledger, cross-chained Hybrix (HY) project. Known to include a wide variety of popular projects on its platform, BiKi is pleased to offer to its users yet another quality token.

Entering under Salangidae Association, Hybrix has been named Startup of the Year  in the Information Technology Products category at One Planet Awards 2019. The Next Web’s team of expert scouts has also selected Hybrix as one of the most promising early-stage companies in the European blockchain space, having built a multi-ledger block explorer.

Ethan Ng, CEO of BiKi Southeast Asia says: “When we came across such a unique project as Hybrix, we knew the Asian markets were looking for project opportunities like this. The milestones that Hybrix has achieved in such a short amount of time demonstrates this project’s ability to achieve its vision.”

The collaboration with BiKi.com ensures that the Hybrix is introduced to a wider and more diverse audience. Until now, the project is mainly known among developers, where it has had more than 500 NPM downloads just over the past month. The step of partnering BiKi will serve to expand its audience as BiKi opens the gate to an Asian market, one where Hybrix has only taken small steps towards so far.

Joachim de Koning, CEO of Hybrix comments: “The collaboration with Biki is a very exciting collaboration for us. Biki provides the gate for us from Europe to Asia. A market from which more and more interest is coming due to the possibilities Hybrix offers.”

Starting in a basement and later moving to a greenhouse, Joachim de Koning and his team have transformed a little known project into one of the world’s most promising and also the first multi-ledger token that goes beyond blockchain borders.

Crowdfunded in 2017 by crypto enthusiasts, Koning started ‘Internet of Coins’ with the aim of developing a cryptocurrency wallet which was agnostic in nature and would allow for any (block)chain to be added to its functionality. The Hybrix (HY) daemon, which is the revolutionary core upon which the wallet is built, was then developed. This would later become the Hybrix platform.

The goal was to take the Hybrix platform further and harness its power to the fullest extent, ultimately uniting the entire cryptosphere. Making the Hybrix code open source, the last three years has seen an enthusiastic team of young professionals working on what we now recognize as the Hybrix platform. They have developed an extensive system which connects over 31 blockchains and more than 387 tokens.

The mission of the team can be traced back to the original blockchain principles of decentralization, privacy and autonomy. An early adopter and miner of Bitcoin (and Litecoin), founder Joachim de Koning has been working on this since 2014. His personal belief is that freedom and privacy coupled with personal accountability are important fundamentals for personal finance. Blockchain technology enables a positive, free, anonymous and humanistic approach to finance, which aligns perfectly with Koning’s ideals and principles. These same values would later become the driving force behind all of the development at Hybrix.

While the crypto scene gave rise to a multitude of companies and initiatives which more or less had the same goals, the ever-expanding landscape where developments followed each other in quick succession turned out to be fertile ground for profiteers, schemers and easy money seemed to be up for grabs. Realizing that consumers and other users stood to lose out in such an environment, Joachim decided to start an initiative that would set out to combine the strengths of the cryptosphere and strive for unity.

Interoperability for Developers, Businesses and Consumers

With the Hybrix daemon developed, the stage was set to take the Hybrix platform further. In 2019, Hybrix was officially launched. The current team consists of 10 core members and is based in The Netherlands, at the center of the blockchain community in Utrecht. Each member of the team has individual expertise, ranging from cryptography to marketing and from trading to social entrepreneurship.

Countless blockchains and cryptocurrencies are being built by many diverse projects and organisations with endless possibilities. However, the problem is that these projects and technologies are often not compatible due to lack of interoperability. A project utilizing its own ledger currently does not connect with other blockchains and ledgers in a secure and decentralized manner.

Hybrix solves this problem by creating a protocol that crosses the borders of digital ledgers, an innovative technology that enables freedom of transactions on 3 levels: a multi-ledger platform for developers; cross-chain swapping protocol for businesses; d’apps for consumers.

It is an inclusive, not-for-profit, open-source project that empowers collaboration, untethered from the limits of specific ledgers, to transfer value without any restriction. Users own their data with strict client-side functionality, making personal finance accessible and safe whilst staying free for everyone.

The first of its kind, the HY token:

Headquartered in Singapore, BiKi.com is a global cryptocurrency exchange ranked Top 20 on CoinMarketCap. BiKi.com provides a digital assets platform for trading more than 150 cryptocurrencies and 280 trading pairs. BiKi.com is focused on providing the safest, most stable and most effective cryptocurrency trading platform. 100% of the transaction fees are used in buyback and burning of platform token, BIKI. Since its official opening in August 2018, BiKi.com is considered one of the fastest-growing cryptocurrency exchanges in the world with an accumulated 3 million registered users, 50,000 daily active users, over 2,000 community partners and 200,000 community members. BiKi.com has received investments from Huobi co-founder Du Jun, Genesis Capital Zhu Huai Yang, FBG Capital, ChainUP and others totaling approximately 10 million USD.