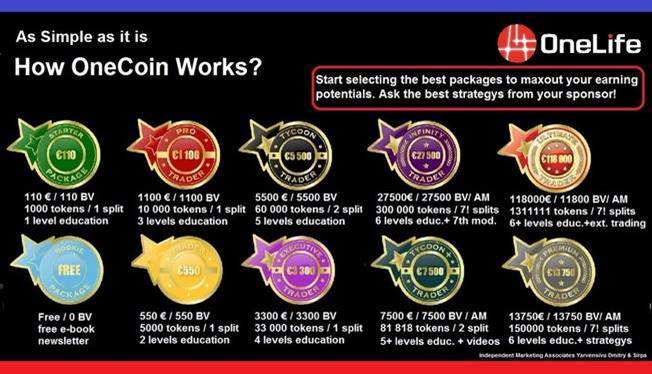 Brussels: Even as the European Union struggles to hammer out a comprehensive crypto asset regulatory scheme; the European Commission allows the discredited One Coin/One Life Ponzi scheme to utilize it top level domain .EU.

One Coin/One Life is the most notorious Ponzi scheme of the decade.  Between €4-5 billion has been swallowed up and despite disappearances, arrests and even murders of its promoters, the One Coin criminal juggernaut continues to defraud investors.

In Spring of this year, the European Parliament announced a consultation in preparation for an EU wide crypto asset regulatory scam.  One victims’ group with losses of over €40 million , represented by attorney Dr. Jonathan Levy, was prominent in its call for a crypto crime victims’ restitution fund to be included in any EU wide regulatory scheme.  The victims’ security fund would be funded not by the EU but by the crypto asset and blockchain industry via a small transfer fee on each transaction.

The victims’ group has previously petitioned and repeatedly contacted the EU Commission and pointed out the flagrant abuse of the .EU top level domain by numerous crypto criminal organizations including One Coin. Earlier this year, the victims’ group filed yet another consultation with EU, this time on the topic of One Coin and its continued misuse of .EU.

Nonetheless the .EU top level domain administered by the EURID continues to host One Coin at the following domains:

Onelife.eu (available from only certain regions)

According Dr. Jonathan Levy: “It is a question of one step forward, two steps back.  The EU knows there are billions of Euros of crypto asset fraud occurring but when faced with taking responsibility for its own top level domain, it turns its back on the investing public.  How can any investor have confidence in a regulatory regime that allows criminals to use its own assets to commit fraud?”

A petition by the victims’ group is currently pending with the EU Parliament.