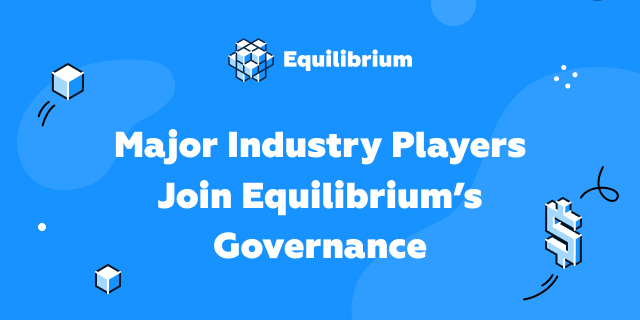 Binance and eosfinex are participating in Equilibrium’s efforts to help bring enhanced decentralization to the DeFi project’s governance processes.

Equilibrium is the interoperable DeFi hub best known for its USD-pegged EOSDT stablecoin, built on EOSIO. EOSDT enters circulation when users pledge digital assets like EOS and Bitcoin as collateral, making EOSDT a decentralized stablecoin. The governance framework that drives the updates to this underlying technology is now also decentralized, depending on multiple entities working together. Binance is the newest, biggest name on this list, joining an EOS-based decentralized exchange by Bitfinex called eosfinex and two major EOS block producers — EOS Nation and EOS Cannon. Each of these well-known companies are now part of the approval process for EOSDT contracts before those contracts are released.

The smart contracts behind EOS-based DeFi applications are changeable and upgradeable for sake of future-proofing these services. Not only do community needs evolve over time, but developers will want to implement new efficiencies as they discover them. Thanks to this feature of EOSIO, DApp upgrades can happen seamlessly without requiring painful migrations to a completely new set of contracts (as is usually the case on Ethereum, for example).

But this feature can also allow for a single point of failure if there is just one entity in charge of approving these updates. Fortunately, multisignature capabilities (commonly shortened to “multisig”) are built in to EOSIO and help ensure that the ability to update smart contracts remains an advantage instead of a vulnerability.

Multisig simply means that two or more accounts must sign a transaction in order to verify it. For the purposes of Equilibrium’s governance, this means the project can’t update its code without letting multisig participants know about it. Equilibrium strives for full decentralization because it prevents single points of failure from emerging while engendering a trustless environment that eliminates the possibility of theft. Compare this to other DeFi protocols with no distributed permission structure, like MakerDAO — it can theoretically do whatever it wants.

“Binance is actively participating in the EOS ecosystem as well as fulfilling its block producer duties and committed to supporting the DeFi ecosystem,” said a Binance spokesperson. “As more DeFi projects continue to gain adoption in the cryptocurrency space, we are pleased to participate in the multisig of Equilibrium’s EOSDT stablecoin to support this step forward for the ecosystem’s growth.”

“The Equilibrium team has a proven track record of delivering innovative, valuable products that contribute to the EOS ecosystem,” said Steven Quinn, Product Manager at eosfinex. “Decentralization and modern blockchain technologies such as EOSIO have jump started a new perspective for finance. We believe that helping to bring Equilibrium Framework to a wider audience will drive increased interest in EOS and further demonstrate the strengths of its community and technology.”

“We’re keen on upgradeable smart contracts and EOSIO’s permission architecture because they bring a lot of flexibility to the development process. Migrating to a new version on other blockchains can be challenging,” said Alex Melikhov, CEO and founder of Equilibrium. “Furthermore, it’s great to have trusted authorities (like major companies and block producers) supporting initiatives that contribute to decentralization.”

Launched in April 2019, Equilibrium has been continually developing its DeFi framework to bring stability and predictability to the volatile crypto market. Its flagship product, the EOSDT stablecoin, is pegged to the US dollar while being derived from the overcollateralization of digital assets.