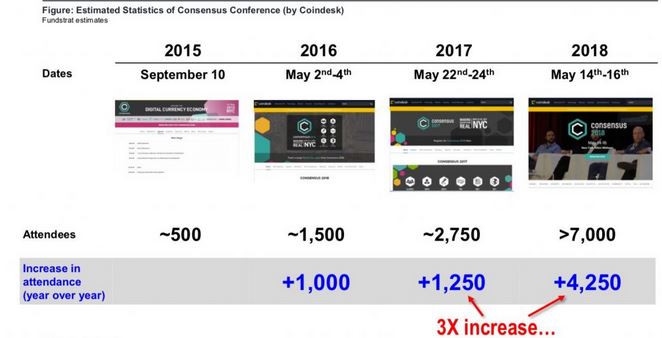 Due to the consensus conference, which has always led to price increases in recent years, expected top analyst Thomas Lee this year, a significant increase in price of Bitcoin.

From May 14th to 16th New York will be hosting the Consensus Conference organized by Coindesk. The conference, which focuses on cryptocurrency and blockchain technology, is the largest conference of its kind in the world.

Already in recent years there have been significant increases in the price of Bitcoin during and after the conference. While nearly 2,750 people attended the conference last year, there are already over 7,000 this year.

Thomas Lee, co-founder of Fundstrat Global and former Chief Equity Strategist at J.P. Morgan, believes due to the increased number of participants and the much greater interest of the public that it can come this year to a significant increase in Bitcoin.

At the conference, many companies will present their new products, which should further boost the price of individual crypto currencies. However, whether it actually can become 70% as Thomas Lee predicts remains questionable. After all, the market environment is currently very favorable, because not only Goldmann Sachs has announced that it will enter the Bitcoin trade, but also the parent company of the New York Stock Exchange will soon offer a platform for bitcoin trading.

Finally, it should not be forgotten that analysts with very positive or negative forecasts can also make a lot of press for themselves. The incentive is therefore very high to make extreme predictions. On the other hand, Thomas Lee was right that in mid-April, the first bottomed out and then it goes up again.