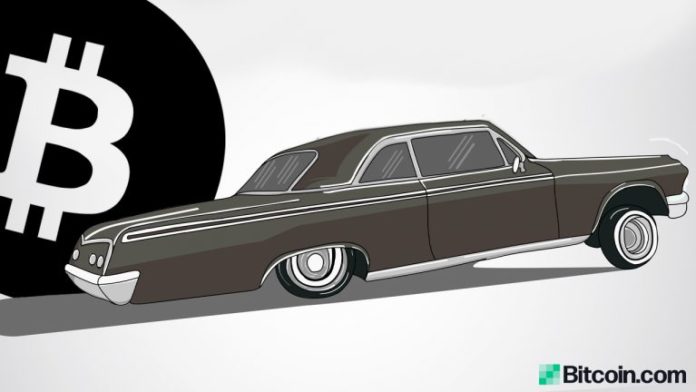 The Bitcoin (BTC) network saw a significant mining difficulty drop on Tuesday when it slid -16.05% to 16.78t. News.Bitcoin.com reported last week on how the network’s SHA256 hashrate plunged around 40% to roughly 90 exahash per second. Following Tuesday’s difficulty drop, BTC’s hashrate has increased a great deal, spiking to 114 EH/s on November 3, after touching 97 EH/s during the earliest hours on Tuesday morning. BTC’s hashrate is hovering just above the 100 EH/s handle at 107 EH/s at the time of publication.

Mining difficulty essentially is the relative measurement of the amount of resources needed to find bitcoin blocks on a given day. It gives people an idea of how difficult it is to mine a new block. Bitcoin’s difficulty changes using 2,016 block epochs or two-week intervals. When the hashrate is extremely high, the difficulty will grow more difficult during the change and if the total estimated hashrate has drops it becomes easier to mine bitcoin. With the hashrate at current speeds today, estimates show another -16% drop on the horizon.

Data from Btc.com on Tuesday indicates the next change is more than 14 days away and estimates show it may drop down to 14.05t, losing -16.3% if it comes to fruition. Today, on November 3, there are 16 mining operations dedicating hashrate to the Bitcoin (BTC) network.

What do you think about Bitcoin’s recent difficulty drop? Let us know what you think in the comments section below.

Bitcoin’s Ongoing Surge Could Gain Steam as Shorts Are Underwater

Bitcoin has seen immense volatility over recent days. The coin currently trades for $13,800, above the $13,200 lows on Monday...