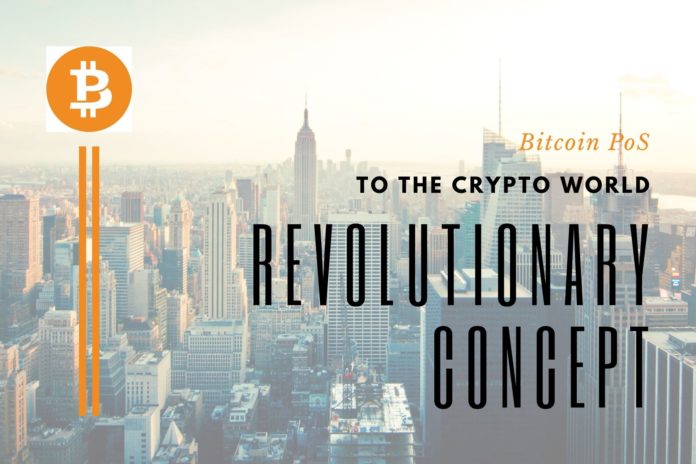 At the time of its introduction, the Bitcoin Proof of Stake was considered a necessary step ahead of Bitcoin. The almost evolutionary concept of BitcoinPoS helped the users circumvent the issues manifested by Bitcoin and its POW Centralization. BitcoinPoS, as the name suggests, conceptualizes Proof of Stake reduces the electricity consumption by 99%, streamlines staking, propels a culture of inclusivity in the crypto, and has better security.

The pro-decentralization design structure of BitcoinPoS makes sure any person can participate and become a part of the crypto world. Furthermore, apart from live staking, BitcoinPoS has rolled out another great concept; cold staking. The core functionality behind cold staking is that a specialized node will stake the coins for the user without spending any coins.

BitcoinPoS cold staking again runs on the methodology of proof of stake. There is no doubt that the PoS system is an ideal combination of a game of theory, automation, and digital currency operations. Users stake any cryptocurrency to gain passive rewards from the block they are staking. And now that BitcoinPoS is going to enable cold staking on their blockchain for the community.

How does Cold Staking Work?

Simply put, the users practicing cold staking consider it as another form of passive income generation by just holding their coins. However, the cold staking nodes do not hold any form of rights over the task of generating new blocks and confirming the transactions. In a world where the cold staking practitioners squeeze around 30% of all the mining rewards, BitcoinPoS is going to help the users earn more.

Cold staking is related to Proof of Staking. Wherein hot-wallet staking allows the individuals to earn the staking reward by using the actual coins, the cold staking helps propel the income generation from another wallet by just using the delegation to do the staking action.

How can users operationalize Cold Staking on BitcoinPoS?

Development has started on a new feature for BitcoinPoS called Cold Staking. This will involve a hard fork of the chain and will be a mandatory update for all clients.

Cold staking will require two BitcoinPoS wallets: one to hold the funds (this can be also a hardware wallet and does not need to be always online) and another one, the hot-node, to do the staking (this needs to be online 24/7).

The cold wallet can delegate the right to stake the coins to the hot wallet, thus improving the security of the staking process: hot wallets are no longer required to hold the coins but just use delegations to perform the staking operation.

However, with 24/7 staking running on the computer via a rented VPS, it involves a risk. To bypass this risk, the users can run staking with an empty wallet via cold staking. This is a risk-free solution provided by various other platforms. But now, BitcoinPoS will also allow the users to a cold stake.

The users can delegate the staking power to another wallet. This increases the chances of getting more rewards even if the user stakes with as low as one coin.

BitcoinPoS allows the users to start cold staking with as low as one coin, and then the rewards generated will be transferred to the offline wallet. This means that there is zero to negligible scope for the hackers to hack or steal anything from the wallet.

Is Cold Staking Better than Staking?

To some extent, yes. Even though the users are looking at higher rewards with staking, there is still a risk of losing all the rewards generated. Given the tight security of the PoS platforms, cold staking adds another layer of security to the wallets and secures the user’s investment.

To Sum it up

Bitcoin Proof of Stake is regularly bringing in new revelations to the blockchain and making it easier for the users to generate profits.

This makes BitcoinPoS particularly accessible and helps every stratum of users earn rewards. Now that there is an added functionality of Cold Staking, it further streamlines the reward generation for the users.